The SAG Awards were handed out this past week-end, and the show is never as juicy as the bigger awards ones, so I have less to work with. But I jotted down some random thoughts while watching it, to share with you here.

Sidebar: For those of you who are wondering if there are also gifting suites the week prior to the SAGs, the answer is not usually, but occasionally one here or there. I had a terrible experience with the beyond-rude organizers (and I use that term very loosely) of one of them this year, (that was held at a venue I absolutely love, so there was no problem with the venue personnel,) so if I can find a day where I have nothing specific to post, I’ll let you know all about it. It’s a juicy story of rudeness, stupidity, and ineptitude, my three least favorite things. My mouth waters to tell it!

Speaking of mouth-watering, let’s start my musings with Simon Baker, who went back up on my official crush list by wearing his sexy glasses. Who can’t resist him when he’s rocking the specs?

And actually, this night was the best everyone ever looked! It was strange. It couldn’t have been the lighting because they looked great outside on the red carpet also. It was like all the make-up artists in Hollywood got together and decided to do their best work at the same time! Some stars who looked especially fabulous were Meryl Streep, Penelope Cruz, Kevin Bacon, Monique, the Baldwin bros, Gabby Sidibe, and even Patricia Arquette. I actually could see all their make-up showing, which is a big television no-no, but they did look great, so I guess it was all right.

The tactless guy who hosted the arrivals on TNT, (I think his name is Peter Castro, but I saw it written only once and very briefly,) said one of the worst things ever to an interviewee. He said that Lifetime Achievement honoree Betty White had just turned 88, and told her, “That’s an amazing, amazing accomplishment in this business.” He in essence congratulated her for being alive! What a cretin. Oh, and then he made a dumb comment (which is kind-of redundant, where these vapid interviewers are concerned) to Holly Hunter, with no answer necessary, and put the mike to her mouth just for her to let out a weak laugh.

Then, on the same show, the announcer said of Sophia Loren, “The epitome of grace and class,” while they showed a picture of her 75-year-old boobs popping-out! Oysh. (I think she’s great–it was just a strange visual.)

On the same subject, what is up with Anna Paquin always featuring hers? Maybe it’s to distract us from her teeth.

Back to Betty White a second. She’s still such an adorable woman. I never realized how much she resembles my little mother! They’re both beautiful, but Maybelle doesn’t wear make-up or have her hair done, so Betty’s the glamorous version. They tie in the mentally sharp and amusing category, though.

Did anyone else notice that no one on the red carpet could complete even one sentence? They all seemed to be channeling Fred Armison’s SNL “political comedian” character, Nicholas Fehn. 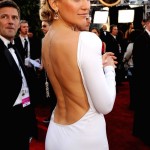 As she displays her back fat, Kate’s expression seems to be saying, “Take that, Alex.”

Why would Kate Hudson wear such a low-cut backless dress, when she has the dreaded back fat? Maybe it was to show us why A-Rod broke up with her. I’m just saying.

Once again, Modern Family’s beautiful Sophia Vergara proved to the loveliest, most grateful, and most genuine star out there.

Stop the presses–here’s a first: I finally have something good to say about Tina Fey’s looks! (Not that she cares about looks when she’s so successful for her mind, but it‘s my job to keep you informed about these things.) She had great winged eyeliner! Seriously. I told you, everyone’s make-up artists worked overtime that day.

This is downright shameful: the show featured a time-wasting stupid montage of “comedy” bits, three quarters of which was violent! With all the great funny stuff in the world, what idiot thought that hitting people, etc. is a laugh riot? Horrible stuff.

Speaking of comedy, I’m very happy for the cast of Glee, a show I never miss, but the winners in that category should have been hands-down the cast of Modern Family. And, of course, Glee isn’t even a comedy, except for the brilliant Jane Lynch’s role.

Did anyone else think that Sherri Shepherd’s jokes about Michael Jackson were mindless and inappropriate? To think that I so rooted for her success when she was an occasional guest on Everybody Loves Raymond.

Julianne Margulies is so much more fun than I would have imagined. I watch her current series, The Good Wife, and enjoy it, and think she’s a good actress. But she always seems so boring on it. Then, here she was, busting out a delightful acceptance speech! Who knew?

What exactly were Marion Cotillard and Nicole Kidman wearing? The answer is: Probably the two worst fashions at the show. I really didn’t think that Marion could ever look bad, but I guess I have to think again.

Speaking of Nicole, has she recently had her face changed? I seriously didn’t recognize her on the Help For Haiti Now Telethon, and she looked strange again at the SAG Awards.

We were reminded by Kevin Bacon, in his excellent acceptance speech that “love endures.” It made no sense in his context, but, trust me, I’m happy to hear it. And I’m also happy to bestow upon Kevin and his wife, Kyra Sedgwick, the award for “Loveliest Spousal Kiss.” They appear to be a great couple. As do Best Actor In A Motion Picture winner Jeff Bridges and his wife, Susan. Jeff also gave a great speech.

I’m glad Jeff won, although I was rooting for Colin Firth, but I’m kind-of surprised that George Clooney didn’t. (This must be the man-centric section of my “review.”) I always feel that everyone wants to vote for George, so that they can make like he’s their friend. Maybe, in this case of the only voters being actors, we didn’t vote for him because he was the star of a film that slighted us by hiring about twenty or so “regular people” for the roles of recently-fired folk. Like we don’t know that feeling! Humph.

Speaking of popularity, I really think that’s why Sandra Bullock won. She’s a nice girl. (Although she didn’t thank the real-life character she played, Leigh Anne Tuohy, or the whole raison d’etre for the film, football-er Michael Oher! The second I saw this miraculous true story during last year’s NFL draft, I told Mr. X we should buy the rights to it and make it a movie. We’re lazy, so I’m glad someone else did it, but I’m upset that the industry has lost sight of the biography in their love-fest for Sandra.) She and I were up for the same role when we were starting-out, and when it got down to just a few of us for the final callback, she was the only actress who was nice. (Except for yours truly, of course.) Neither one of us got it, but since then, I’ve always been happy for her success. 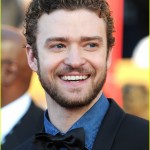 Justin Timberlake and his bow-tie.

Once again, Drew Barrymore had the worst, phoniest speech of the night. Just when I was finally beginning to like her. Shame. She acted shocked and appeared fake in her breathlessness and stammering. She carried-on like she didn’t even know she was nominated! She opened with, “I’m not used to doing this.” Yes she is–she won a Golden Globe six days before!

Last but not least, if nothing else, the occasion proved that even fashionably hip Justin Timberlake cannot rock a bow-tie.