This actually appeared to be the classiest group of Grammys attendees ever. Most of them were well-dressed and well-spoken. But that didn’t deter me from making my (often negative) observations. Let’s get right to it. 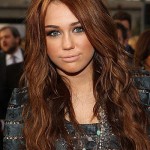 Every female needed lip color. Even though I usually go with nude lips myself, it’s not on-camera, with the world watching! And right now, there’s no particular trend in lips–it’s whatever looks good. So could they spare at least some shine, stain, or gloss? I’ve rarely seen anyone need lipstick more than Miley Cyrus.

Kara DioGuardi is so hunched-over! Thank goodness she’s not a judge on a models show!

Speaking of bad posture, the new trend in men’s suits of wearing them too-tight makes them all look like little old men. (Except for the fabulous Maxwell, who rocks that look.) 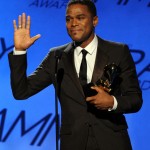 Speaking of Maxwell, I couldn’t be happier for him. He’s so talented and deserving, especially after taking almost a decade off between albums. And he appears so humble and appreciative.

I loved Common on the carpet, especially with the Zac Posen Band. He seems so genial; so what’s he doing with creepy, holier-than-thou Serena Williams as his girlfriend? (Maybe he named himself for her behavior.)

Ricky Martin is still the loveliest. He’s the only person who ever made me understand parenthood. He’s adorable. And, how big are his hands? 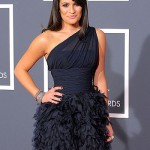 This was the best Lea Michele ever looked! She seemed nice and appreciative, too.

Good for the Linkin Park spokes-guy for calling-out full-of-herself Carrie Anne Inaba about not knowing which song they were nominated for! Then she made the whole thing, as she did with almost every interview, about her.

Let’s just air all my complaints about Carrie Anne right now and get it over with. (Well, somewhat, anyway.) She’s rude and talks non-stop over EVERYONE!; her co-host, celebs, their guests–everyone! And she makes her interviews about her all the time, [unlike my site, which states upfront that Its Not About Me(.TV).] As much as all red carpet interviewers are self-aggrandizing, she’s the worst.

As awful as she was, her co-host, Chris Harrison, asked the single rudest question I’ve ever heard on any red carpet; this was his question to Russell Brand, on his recent engagement to Katy Perry, verbatim: “I mean honestly, is it gonna happen? I mean, do you really think you’re going to make it all the way to the altar?” Even the weirdo, rude-himself Russell was taken aback by that one! 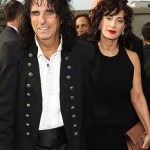 I can’t believe I’m saying this, but I loved Alice Cooper!!! (And not because we look alike, if you squint.) He and his wife of 34 years appeared to make a great couple.

What an adorable kid Justin Bieber is! He’s intelligent and thoughtful and even told Ryan Seacrest, “You look nice.” There must be some really proud parents behind him. (The only two guys I’ve ever wanted for family members before are Adam Lambert and my beloved RI pal, Ronnie Hazel, Jr. I think I may have to add Justin to that list.)

I’m always happy to see LL Cool J since I met him last year. (Check it out in my Celeb Sightings section.) He’s exactly as nice in person as he appears on TV.

Jason Mraz also seems like a nice guy, who cares about the world. 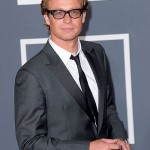 Winner once again, for most gorgeous person there is Simon Baker. Especially in these sexy glasses. Mmmmmmm.

Steven Colbert is very funny. Nothing deep to say about him. (Except that I couldn’t believe that they played off his acceptance speech on the telecast, when they had him open the show with his humor!)

And he saved the innocuous Carrie Anne Inaba’s butt when she was interviewing him, and then basically pushed him aside for Justin Bieber. Steven made it not as uncomfortable as it could have been. And Justin just handled the whole scenario with his usual (unusual for a kid) poise.

Shockingly, Pink and her on-again husband seemed nice and normal!

T-Pain is so eloquent! Not.

What hope so there for the rest of us when Heidi Klum is starting to look like Anne Meara? (Check her out on her right side; I have back-up opinions on this one–it’s not just my imagination.)

Jennifer Hudson’s strange pony-tail ’do made her head looked shaved, except for the bangs and tail.
Carrie Underwood is way too skinny. And trust me, I’m a fan of good skinny. But you can see her hand veins! Ugh. She’s gorgeous and sings really well, and is one of the few who really looks like a star, but she really doesn’t have too much to say, personality-wise. 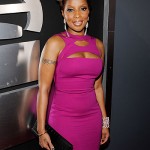 I’ve always loved Smokey Robinson, so I’m sadly reporting this nonsensical comment from him: “Earth is the only thing we have right now.” It sounds like a line out of Star Trek, not the Grammys red carpet.

In addition to Taylor Swift’s awful performance on the actual show (which I covered in yesterday’s column,) she was dressed more for the Oscars than the Grammys. Her gown was too grown-up and classy for a music biz event. But I actually loved it.

Nobody understood a word Fergie said. And her chest was sweating! Ugh.

Ciara had the most horrible, confusing outfit.
Kevin Jonas’ new wife is cute, even with her ski-slope nose job.

Ke$ha looked the worst. She had homeless hair, a bad outfit on a strange body, messed-up nails, and cheap-looking shoes. Why would her handlers let her show-up like that, when her career is just getting going? Wouldn’t they at least try to make a better impression? The good news is that she has only up to go.

As awful as she looked, the stupidest comment of the evening went to her interviewer on E! (The skinny, funny-looking woman who co-hosts with Ryan Seacrest; I just realized that I don’t know her name.) Ke$ha admitted that in her leaner days, she would “stop on the side of the road and dig through some clothes.” The interviewer’s idiotic follow-up remark was, “What girl doesn’t do that, right?” How does this woman have a job? 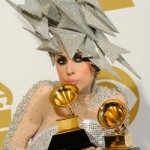 And last, but not least, Lady Gaga’s second outfit (the one with a giant headdress featuring multiple-points,) was even worse than her first. And it was incredibly rude. Did she not know people would be sitting behind her? She’s a narcissist of the highest order.

Okay, that’s it for now. But luckily for all of us, the Oscars are only a little over a month away. Yay!