I always go in order on my awards shows musings, but I’m so thrilled that Meryl Streep won that I have to begin with that. No one deserved the win more than she did. As they were announcing the category, I was actually in pain, assuming, for sure, that she was going to get screwed again. I screamed louder, and jumped higher, than even Meryl herself. And I cried for a good five minutes during and after her speech. I love when fairness prevails. 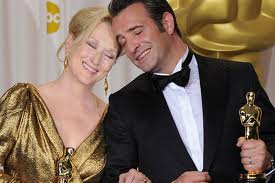 Best of the Best--Meryl Streep and Jean Dujardin.

Also, I have to say that, outside of the opening sound glitches, this was one of the most enjoyable Oscars in recent memory. Some of Billy Crystal‘s bon mots were hilarious, none more so than the one about what was in Nick Nolte‘s mind. Mr. X and I played that one several times for the extra laughs.

I missed most of the walk-ins because I was at an adorable three-year-old’s birthday party, so, sadly, my snarking of those will be limited.

Let’s get to my as-they-happened musings, in order:

When I said, “Eww,” to Shailene Woodley‘s dress, Mr. X asked why, and I answered, “Because it looks like she’s wearing a bathrobe!!!”

I especially loved seeing Max Von Sydow after meeting him yesterday. [You can read all about it in my upcoming Celeb Sightings column at the end of next week.]

How is this Tabitha woman (on the TV Guide coverage,) a fashion expert??? She looks like a Tim Burton character.

Good for Maya Rudolph to have never fixed her nose, teeth, or ears. I guess it’s okay when you’re funny. But why would she feature her giant ear??? I have the same one and I would never show it.

What’s up with the “Kizzy” hair on Viola Davis? To the Oscars?

Viola’s hubby has some personality! I liked him.

Chris Harrison mentioned that Viola and her husband honeymooned at George Clooney‘s house, but didn’t ask how that came to be, or even how they know each other. Of course he didn’t, because that would have been interesting.

This was the best Michelle Williams ever looked.

Chris Harrison didn’t know Michelle was best friends with Busy Phillips??? He’s interviewed them a bunch of times! Even the hating-this-stuff Mr. X knew it!!!

How is Louise Roe, that Bucky Beaver doppelgänger on the national ABC walk-in show, a fashion expert??? Mr. X hit it on the head when he said that she’s the daughter of Cat Deeley and Miley Cyrus!

Another one who should not be a fashion expert, Nina Garcia, had her hair hanging down, hiding her face.

This was the best Octavia Spencer ever looked. Will she get her teeth fixed now? I have a feeling not because she’ll still be eligible for only character roles.

That idiot, Louise Roe, asked Jonah Hill, regarding baseball, “What about it captured the nation?” It’s called “the national past time,” moron! That’s just basic knowledge, nothing hard to figure out.

What a story–Dolores Hart being there! She’s the woman who gave up a promising acting career in the ’60s, even kissing Elvis on-screen, to become a nun. She was in a nominated documentary this year about that very topic. I would have loved to hear her speak about it.

Why doesn’t Prince Albert of Monaco, have a French accent? 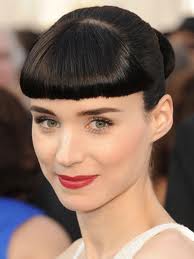 What a personality on Rooney! Not.

Tim Gunn said, regarding Rooney Mara, “She’s a very polarizing figure. You either love her or you hate her.” Who knows her to care either way???

George Clooney’s mother (whom ABC showed in a taped segment,) looks the same age as her son!

That’s all the red carpet stuff I had time to watch. So, now to the show:

What was Tom Hanks‘ bit??? So, was that man a venerable seat-filler or not? Why waste our time with that bit if he wasn’t? That was just creepy.

Sam Elliott became a cinematographer? (You have to see the visual to understand.)

I really like her, but Sheila E.’s music sounded like something was breaking backstage. At least the producers of the show were attempting to be hip.

I loved Billy’s jokes about the theatre’s name, even though I’m pretty sure that most people outside of show business/Los Angeles/big business had no idea what that was about.

I didn’t like any of those movies in the “major films” montage except for Raging Bull. 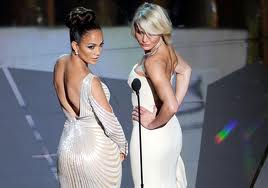 Jennifer Lopez said about wardrobe, quoting someone else, that dresses should be “loose enough to reveal you’re a lady” while her boobs were popping-out. Great choice on the part of the writers, eh?

Speaking of those two, they were idiots on-stage, doing a stupid bit that fell flat, (that looked like they just came-up with it themselves,) and stepping on the Best Make-up winners’ moment.

A half hour into the show, I still felt no energy or excitement, for some reason. (And that continued for most of the night.) 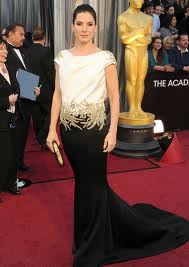 Sandra Bullock got a bit heavy, looked dumpy in that horrible dress, and looks like someone took an iron to her face. I know people love her, but I just couldn’t ignore her weird looks.

I just do not get the attraction of Bradley Cooper.

The Cirque du Soleil performance was the best thing I’ve ever seen on the Oscars!!! Hands down. It was spectacular.

Cutting the mikes on the documentary winners was so rude. But perhaps they asked for it because one of them had just cursed.

When Chris Rock was entering, I told Mr. X not to eat, so we don’t choke from laughing. But poor Mr. X, who should have known better, admonished me, “He’s not going to do a bit, Ka.” Yeah, right. He did one about getting paid for voice-overs and it was really funny. Maybe not choking funny, but amusing nonetheless.

I love animation so much that I’ve gone to animation festivals. So, please believe me when I tell you that winner Rango is one of the worst films I’ve ever seen. Johnny Depp’s the main voice, so what does that tell u??? (Not a fan, not a fan.)

Have you ever seen Christopher Plummer and George Valentin, the main character in The Artist, together?

Billy doing Nick Nolte’s mind made me laugh more than anything ever. 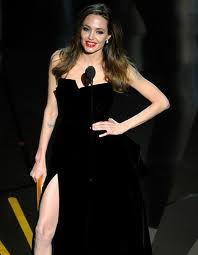 I love Angelina Jolie, but this was the worst she ever looked. Those arms are bad enough, so why would she also make a point of sticking-out her stick figure leg? Eww.

Even so, it was really rude of the writer winner to mimic Angie.

I also think it’s rude of Woody Allen to not show-up. Back in the day, his excuse was that the telecast was on Monday nights, his night to play clarinet at Michael’s, a club in New York. But there’s just no excuse now.

Speaking of Woody, I’m still trying to figure out Midnight In Paris, the film he just won Best Screenplay for.

Why did Kristen Wiig have yet another nose job? Her original nose had nothing wrong with it, especially for a comedienne. Looking at her standing there next to Maya Rudolph, I couldn’t help but observe that noses should ideally be somewhere between theirs.

Oprah Winfrey‘s phony English accent pisses me off all the time. I’m so glad that we don’t have to hear it that much anymore.

The In Memorium section was well done, especially Billy’s personal, and heartfelt, introduction of it.

Jonah Hill’s assessment of acting, in a taped segment, was spot-on, honest, and charming.

And then I cried my guts out over Meryl Streep’s incredibly well-deserved win. She’s gotten screwed so many times, I was expecting that to happen again. [Read my review of The Iron Lady here: www.itsnotaboutme.tv/news/2012/01/26/movie-review-the-iron-lady—give-meryl-streep-the-oscar-this-second] And her speech was the highlight of the night.

That’s it for this year’s Oscars. Tomorrow, the Gifting Suites write-ups continue through next week, so please make sure to check for them.