I’m too exhausted from watching all the Inauguration coverage to mold my random thoughts on it into a cohesive column. I wasn’t planning to write about it at all, but when the Bidens won the dance-off last night, I realized I had to weigh-in on the whole inauguration day and night; tweeting just wasn’t cutting it. I had more to say than 140 characters at a time would allow, but no worries here–I’ll try to keep my thoughts to a minimum.

The President, taking one long last look at the Inauguration site.

I watched all-day coverage, beginning with them walking to the White House from the swearing-in. I missed that and the speeches, live, so, let’s begin with the walk to the parade.

Michelle’s bangs looked good, but excuse me, who had them first? Moi!!! I’ve been rocking these babies since the beginning of my career!

Her coat and especially the purple gloves were fabulous, but that dress and stupid little shrink sweater that were under there were so not appropriate for the occasion! And she repeated that sweater from the real swearing-in the day before! Not good, not good at all. 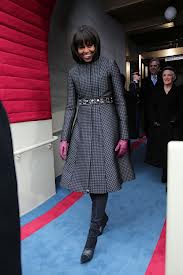 And the sparkly belt on the coat, which was the best part of the outfit, was a touch that someone else added; it was not the designer’s accessory, which is sort-of a slap in the face to him. No one else pointed that out. That’s why you always need to read what I have to say!

I love the Prez, but he should not have been chewing gum during the parade viewing; it’s so not presidential. I’m assuming it’s smoking-cessation gum, but a leader should not be having this much trouble quitting those cancer sticks—it’s a terrible message to all the youngsters out there!

Now to the Balls:

Why didn’t the First Couple have choreography for their dance???? The crowd would have gone wild! At the very least, they could have done the Temptations walk. Did they not know they were going to dance in front of the whole world last night??? I know Mr. X and I are hip-hop dancers, so we have an unfair advantage in this category, but we have a routine ready for any occasion that might arise, and so should they! Or the Bidens should have joined them, and switched partners. Something. Anything other than that uncomfortable middle school slow dancing they did. In front of the world.

Obama should have joined Jennifer Hudson in the singing of Let’s Stay Together. That would have been fabulous!

Or had Bill Clinton accompany her on sax!

Speaking of sax, I have a feeling the Obamas are the first couple having sex in the White House. For real. 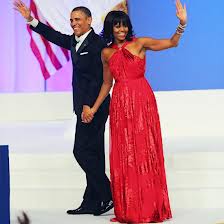 I liked Michelle’s red ball gown, but she really should have given the publicity to another designer this time. I feel it was her duty as First Lady to spread the wealth around. Every commentator seemed to agree with me on that one. They appeared really bummed when they had to announce it was the same dude as four years ago. (So I’m not going to mention his name here.)

I hate Jamie Foxx, but that guy sure can sang!!! [Note: I meant the “a” in “sang.” You have to read it with that inflection.] But he didn’t have to implore the crowd to “please make some noise for an incredible day today, please!” The crowd was already in a frenzy from the Bidens appearing on-stage, and wasn’t even listening to Jamie; he did it for his own sense of self-importance. The same way he does everything. 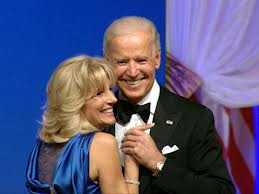 And yeah, right Jamie–Joe’s going to whisper in Jill’s ear, “I can’t stop loving you.” Very appropriate inaugural talk. Although I’m sure he does love her madly. The were practically making-out while dancing. And they went over and thanked Jamie and his duet partner, (who never even got a mention, from anybody!,) after the song, which is what the Obamas should have done to Jennifer.

I’m afraid that the Bidens won the dance-off! Their dance was much more fun and heartfelt.

In the recaps of the morning festivities, I noticed that Kelly Clarkson was better than Beyonce in their dueling musical national pride numbers.

The first time they showed a re-cap, I noticed that Pres. Obama messed-up the word “states” in the oath! Why did no newscasters mention it all day?! Anderson Cooper finally did…at 7PM!!!

Why would Lina Cho, some CNN correspondent whom I’ve never seen before, not have that major mole on her top lip removed??? Especially to be a fashion consultant! It makes her look like a character in a Farrelly Brothers movie!

Michelle is a little sway-back and the red dress really accentuated that posture, which is not a good thing.

Stevie Wonder was the best part of the whole day and night! Joe Biden came in second.

CNN cut off the Veep speech to the Armed Forces! How crazy of them. And rude. Even I was interested in what he had to say!

Is it a bit weird to have an “inaugural poem?” Why not an inaugural song? Krump dance? Mime? Performance art?

I’m ending now, before I make that last list go on and on.

Here’s to Obama having a super-productive four more years. And to all of us reaping tons of benefits from this administration.