Outside of Ricky Gervais’ hysterically funny opening monologue, which I know was wince-inducing but totally spot-on, there was not much else to say about this telecast. I even delayed writing this for a day, in case further reflection would produce some bon mots, but it was just too nothing. 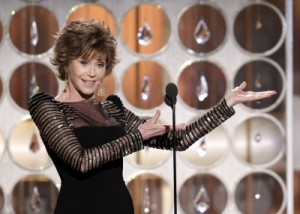 I thought I'd put Jane Fonda at the top here because she looks so outstanding!

So, here are some quick thoughts I jotted down while watching live, though none of them are earth-shattering this year. (I was on a high from the Jets win over New England, right before the show began, so maybe that has something to do with my ennui with the Globes.)

I always love seeing Angelina Jolie and Brad Pitt out together. They always look like they’re on a date early in their relationship and totally in love with each other. She was the best-looking female of the evening and he was even more gorgeous than ever! 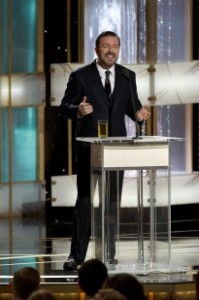 Much as I loved Ricky’s observations, what I liked even more is that he made me so grateful that my acting career has never really taken off yet, so no one can say such mean things about me.

The scientology “joke” was perfect, though– we all think it (or know it, as the case may be,) but no one seemed to want to laugh at his line that night.

The only one who appeared to be really classy and intelligent was Natalie Portman. Perhaps that’s because, since she’s preggers, she’s the only there who could not get drunk!

Actually, Jim Parsons doesn’t drink either, which is what he and I have in common. I hate the taste of alcohol!

I’ve told you before how lovely LL Cool J is, but now that I know we have the same bday (January 14th, in case you missed mine last week,) I love seeing him on TV.

Christian Bale’s speech was excellent and surprisingly restrained for him. His performance in The Fighter got my vote for the upcoming SAG Awards, as well. 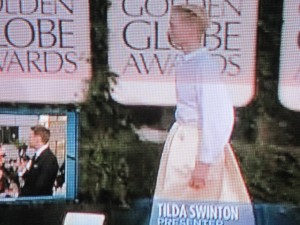 This phots looks a tad strange because I had to take it off the TV, but look at her weird posture, which the outfit definitley does not help!

Tilda Swinton–there’s so much to say about her, none of it good. She never looked more like Gollum! She’s so weird. What was that outfit??? Maybe she was late to the ceremony and just wrapped her bed sheet around her waist. When I caught a profile shot of her on the red carpet, with her outfit of two clashing whites, her beyond-pale skin, no-color hair, and dreadful posture, I thought she looked like a character out of Cirque du Soleil! 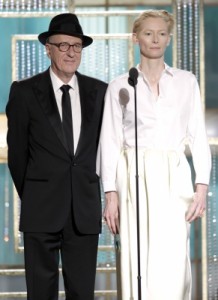 And, when presenting, she and Geoffrey Rush, in his black fedora (like we would have cared if we had seen him bald for a role,) looked like a comedy spy team! It was like they were auditioning for a Pink Panther remake or something.

After seeing poor CeeLo Green’s odd body on SNL the previous night, I realized that Al Pacino looked very similar standing on the awards stage. And could Al have been more boring? His speech made me wish that someone else had won!

Poor Claire Danes was trying desperately to get her cry on, but it was just not working for her.

Jane Fonda looked amazing! (And I really mean that word.) At seventy-three, she really did look only around fifty. I think I’m going to start doing her old exercises! 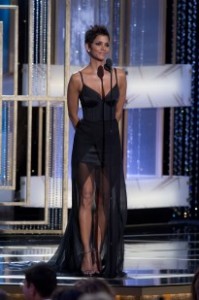 Halle Berry walked onstage like she knows she gorgeous, and well she should.

Now to the walk-ins, where not too many people looked special. There were too many French twists (hair-dos,) way too much beige, and why wear gorgeous high heels, such as Olivia Wilde’s shiny ones, if no one’s going to see them? Actually, as the originator of wearing two different color shoes with dresses, (although I did it with cute high-top Reeboks, not weirdo bad-looking heels,) I must say that Helena Bonham-Carter looked awful with hers!

Among those in desperate need of some skin color: Kaley Cuoco, Elizabeth Moss, January Jones, Piper Perabo, Julie Bowen, and Dianna Agron. Whew. Get these ladies to a tannery!

Hey E!–what makes Kelly Osbourne a fashion expert? She rarely looks good and those tats on her arms are not even artistic!

The “3Js,“ as I called them, (Jason Segel, Jake Gyllenhaal, and Jimmy Fallon,) proved that guys have more fun at these events, when they met up for big laughs on the red carpet.

Emma Stone’s too skinny, too blonde, and does anyone else notice her annoying lisp?

Scarlett Johansson’s ’do made her look like the Bride Of Frankenstein! Maybe there’s a re-make happening that we don’t know about.

Keith Urban needs to stand-up really straight, which he doesn’t do now, since Nicole Kidman’s so very tall. I actually had a hard time recognizing her face through all the apparent tweaks she’s obviously had done recently. It looked like she even had her nose done a bit, which is just nuts!

I hate to say it, but for the first time ever, I hated Sofia Vergara’s horrible dress. It was so awful on all levels that I was shocked to discover it was a Vera Wang!

I’m not happy reporting this, but both Christina Aguilera and the adorable Julianne Hough pudged-up a tad. Welcome to the club, ladies! But their lily-white-ness and platinum-bordering-on-white hair did not help them play down the weight gains.

Even Justin Bieber didn’t look like his cute self! He’s too skinny now, and the new hair and too dark brows didn’t help.

But no one’s outfit was more ill-fitting than the creepy Anne Hathaway’s! It made her exposed back look wrinkled! I was positive I saw the outline of her pantyhose on her stomach from the front, and assumed that was why she was holding her arm across her mid-section in a strange way, (to hide the line,) but then when I saw her back, I realized she could not be wearing something that grips her in the middle. So, her body just has some weird indent! Oysh.

That’s it for this year’s Globes musings. But much more interesting will be all my scoops on their attendant Gifting Suites at the end of this week, so please don’t forget to check back for that column!