Though I love this expression, something about it has been bothering me lately.

I don’t know if this topic exactly warrants its own column, but, when I found myself ruminating over it again in the shower just now, I knew I had to get it off my chest. 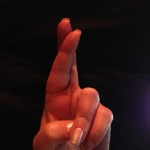 So, here’s the thing: does the expression “fingers crossed” have a positive or negative connotation? You know the meaning when you hear someone say it. And the visual, especially from goony people such as Cat Deeley, (host of So You Think You Can Dance, who seems to use it even more than I do,) further helps clear it up. But seeing it in print, can you ever be sure what meaning the writer is attributing to it?

So, since I use it frequently, here’s what I’m worried about: it means both “I hope things work out,” and “I’m lying!” How did that happen? Aren’t there supposed to be people in charge of this sort of thing?

Even if you word it differently, such as, “I’m crossing my fingers,” nobody knows what you’re telling them. You still could be mean you’re lying.

So, to clear it up for my readers, when I write it, it always means that I’m hopeful for whatever sentence came before. I know I could fall back on the old reliable, “knock on wood,” but there’s something that sounds too superstitious about that one. I am totally superstitious; I just don’t want to broadcast it all the time!

So, I hope that clears it up for you, where my write-ups are concerned. Fingers crossed that it does!