Recently some readers, both those I know personally and some just kind enough to share their thoughts on this E-zine, have been asking for more of my observations on current TV shows, so I figured I should wrap-up June with some. I’ve included a couple of other topics that are relevant this week, too. 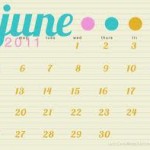 Between Roger Federer losing in the quarterfinals at Wimbledon yesterday and Javier Colon’s duet with Stevie Nicks on The Voice last night, (and subsequent win–yay!!!,) my false eyelashes got quite the work-out.  I basically started crying in the morning and didn’t stop until bedtime. So, let’s go in order and begin with Wimbledon. 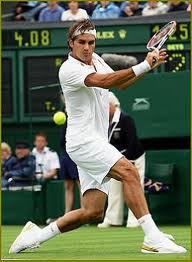 I really can’t even write about tennis just yet, I realized. Roger’s loss yesterday was seriously too painful for me. I’m hurting for my little mother, too, who loves him as much as I do. I think even Roger himself is not taking it as hard as we are.

I wish I were still doing sports radio now because I have a lot to say on the topic, but it’s making me ache even to see what I wrote. I’d have to read it over and over to proofread it, whereas on radio, I just let it all out and can’t go back.

But I have to tell those of you who didn’t see his match yesterday against France’s Jo-Wilfried Tsonga– Roger Federer is the classiest guy in sports. The other players always say so, too. His loss should have been crushing, and players in that position always hurry off the court, even though, at Wimbledon, they’re supposed to wait for their opponents and exit together. (I can’t find out if that’s a rule or just a tradition, and I’m out of patience to keep trying for now.) I can probably count on one hand just how many times I’ve ever seen that done.

But Roger waited for Jo-Willie for quite awhile because Tsonga said he didn’t realize that Roger had waited, so he was just enjoying the moment. Trust me when I tell you that no one, absolutely no one, would have stood there waiting like Roger did. What an unbelievably class act he is.

Speaking of how classy he is—he could have already just retired, like Pete Sampras did when he stopped winning everything, as the Greatest Of All Time. But, at just about thirty years of age, Roger loves the game and is not afraid to put himself out there and have everyone question his dominance.

I’m sorry, but I just can’t discuss anything else about the tournament at this time. So, let’s move on to a much more shallow topic, but with the happiest of endings.

First, the positives, which involve only Javier Colon. His victory is the first really fair thing I’ve seen in show business in a really long time. 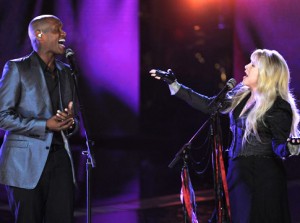 And his duet with Stevie Nicks on her iconic Landslide was breathtaking, even with a shaky start on both their parts. But by the middle of it, I was a puddle of mush, as I’m sure most who witnessed that were.  Stevie was so wonderful to him!  I don’t know how he kept it together to get through the song. If people want to call this one “amazing,” I won’t have a quarrel with it.

Okay, most of you will be happy to know that this is where the love for the show ends. Here come the honest negatives:

First of all, as I’m sure I’ve written before, the show is called The Voice, and it’s all about this celeb’s or that celeb’s “teams.” Yet, only an individual wins, and each contestant competes against their other “team” members, except for the very last show! That’s the opposite of “team.” And, after the first “blind” audition, where the team captains have their backs to the singers, they not only can see them, they become friends with them!!! So, it’s only a smidge about their voices, really.

If it truly was, little Vicci Martinez would never have made it as far as she did—all the way to the finals! Her voice is really not very good.  To copy an erroneous word from the American Idol judges, she’s always “pitchy,” which in real words means she hits the wrong notes more often than not.  I recognize that she gives her all to her performances, but this isn’t called “The Performance,” it’s called The Voice.

But good thing it’s not called “The Personality!” Hardly anyone up there has one! Except for the fabulous Blake Shelton, that is. He’s the perfect country star; he can sing and play guitar, is tall and stands straight, is good-looking and dresses cute, and is extremely funny and charming. But the personality of the show ends with him.

I don’t know how he can be so enamored of the creepy Dia Frampton. She does have an interesting voice and she’s an accomplished musician, but she’s the absolute dullest person in the biz!  At least she rates Mr. X’s favorite number on the personality scale: Zero point zero zero. And that’s with us being generous!

I just thought of this: she could play a crazy stalker in a horror movie. She just stands there with a weirdly mysterious look on her face and has absolutely nothing to contribute. Ever. And she makes weird eyes at Blake. So, if they ever re-make Play Misty For Me, with Blake in the Clint Eastwood role and his new bride, Miranda Lambert, in the Donna Mills one, Dia would make a great Jessica Walters substitute. (Wow—I’m hot tonight!)

And where oh where did she come up with that final ‘do???  Mr. X said it was something out of Star Wars.  She must not want to get by on looks because she does everything she can to look her absolute worst! Every outfit she wears makes her look more dumpy and nerdier than the last.

Enough about her. Let’s move on to Carson Daly. He seems like a nice guy, but could anybody be more boring? Other than Dia, of course. I’d love to be a fly on the wall for a conversation between those two. I’d finally get the sleep that I crave.

Last group of questions on this topic: How are these lummoxes, (excluding Javier as one,) going on tour?!  Does the public, (meaning Middle America,) know that the famous singers from the TV show aren’t going to appear with them on tour?  Who’s going to buy tickets to that snoozefest??  I want names.

After a full day that included watching ten hours of Wimbledon, crying my guts out, going to an early evening event in Beverly Hills, picking-up dinner for Mr. X and me, watching the finale of The Voice, crying my guts out some more, and writing most of this column, I finally got to see So You Think You Can Dance in just about the middle of the night! The time renders me too bleary-eyed to share most of my thoughts with you, but, of course, I have to include just a couple. 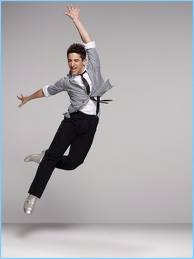 I just love that little Jess LeProtto! His every move is magnificent. I truly can’t take my eyes off him. I just watched his number tonight about ten times. Even Mr. X can’t get over how great Jess is. What he does cannot be learned; it comes from within. I really want to thank the producers for choosing him so I can have something to look forward to every week for a while.

But, once again this season, the direction is just awful. They keep cutting off the feet! Of dancers! In a dancing competition! Okay, don’t get me started. I’m pretty sure it’s the same woman director as last year, and they really do need to look elsewhere next season. I’m just sayin’.

In case you missed his latest attempt at career suicide, now he’s bagging on mentally-challenged people. If you really want to read his evil words for yourself, you have to research them because I won’t let such rottenness be typed by my fingers.

If NBC doesn’t fire his ugly ass now, there’s something seriously wrong with the powers-that-be over there. I’m happy to say that I watch only three shows on that network, but I may have to make it none, in protest.

All I can add on the subject is: I told u so!

Please be sure to read all the July features right here.  I have some fun ones coming up, including the scoop on a recent gifting suite, dish on lots of events, some fun (and possibly surprising) celebrity sightings, and, knock on wood that I have time for it and am now allowed to tell it–my jury duty story!  Here’s a hint–I thought I was going to be handcuffed and held in contempt!  Instead the judge told me that I’m charming. But it hit me that he may have been sarcastic. Nice.