I’m so sick of people ragging on Chris Brown–almost as much as he is! Enough already. His troubles are very old news, he’s done everything he was supposed to do to satisfy his court sentence, and now let’s all move on already. Rihanna appears to be over it, so why can’t the media and other-people’s-business-minders let it go?

I’m not sticking-up for someone punching anyone ever. That’s just plain terrible. But we weren’t there, we don’t know the fight. I re-iterate, domestic violence is never okay. All I’m saying is that we didn’t witness the fight itself, and if they had been drinking, as they say they were that night, it might help to explain what truly was a one-time horrible incident. 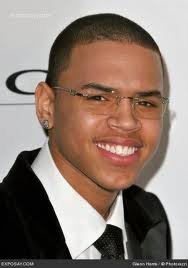 But also not okay is the media bringing-up the awful situation to Chris Brown at every turn. It happened over two years and he’s done what the court has asked. And now, this week, he went on Good Morning America in good faith to promote his first new album in years. I think he was correct in assuming the short interview would be about his music, especially on the day the album dropped.

Instead, host Robin Roberts blind-sided him with questions about the incident from two years ago. Rather than re-vile him for showing his temper about it after the show, I commend him for keeping his cool on the air! I don’t know how many of us could have. He repeatedly told Robin that he’s there for his music and gently let her know to stop. He wasn’t rude to her at all, didn’t come off as snippy, and held his feelings in check. Props to him for it all.

He even performed the heck out of his number. And did it early in the morning, in what’s always a strange performance venue. No one would even know he was upset! The hosts signed-off by singing Chris’ praises and said he’ll perform another number on ABC’s website. So, it’s not like he unleashed an attack, in any sense of the word, on anyone.

Instead, he chose to keep his temper tantrum, if he even did indeed have one, to himself and possibly throw a chair in his dressing room. Or punch a window. Big deal, I say. He should be in no trouble whatsoever. It didn’t happen in public, or someone’s home or store or personal space–it was in a dressing room of a giant corporation’s building.

So, instead of the public trying to bad-mouth Chris again, why don’t we all realize that what Robin Roberts did was way out of line? Imagine yourself in some trouble a couple of years ago–whether personal, financial, at work, in school, etc. Would you be happy if people brought it up all the time, especially in front of others, even this far removed from it? (“Hey, Harry, what about the time you shop-lifted in college,” at your company’s board meeting?) I think not.

Here’s an interesting point I made to Mr. X: that guy who played Roc on TV several years ago, Charles Dutton, had been in prison for murder just a few years before that. Did the talk show hosts ever bring it up to him??? Even once? The answer is no, of course not. He had paid his “debt to society” and not everyone was moving on.

And what about Mark Wahlberg? I just recently found-out that he had blinded a man in his wayward days before he became Marky Mark. Blinded a man! And it finally came-out in a big interview he did on 60 Minutes a few months ago, to promote his film The Fighter. I did research on the incident, and couldn’t find any instance of his paying restitution to the man. But no one has ever questioned him about it. And I have a feeling he’d do more that throw a chair if they did.

This morning I read that Good Morning America says no talking points were discussed, Robin says she cleared the questions with him before, and on a show on BET last night, Chris says the talking points approved by his people were about his new album and what he calls “positivity.” Even though there’s no way any of us can know what really happened, I tend to side with Chris’ version. I’ve done many talk shows in my day, including ones on ABC, and I can tell you that there’s no way a show as big as Good Morning America doesn’t plan-out the conversations before. Big talk shows always do what’s called a “pre-interview” and make a script out of what they want you to say, what they’ll allow you to say, and if you’re a star, as Chris Brown is, what the star will agree to have the show’s host(s) ask. Period.

Some hosts can then blind-side you, as once happened to me, big-time. I was a guest on a late night show that was trying-out Joy Behar as a host that week. [Note: she didn’t get the real gig, thank goodness.] For those of you who’ve seen my show, you know that I always talked off the top of my head spontaneously for a half hour, and therefore never liked talk shows I was guesting on insisting on my “script” beforehand but I always went with it. (And just about every show, including The Tonight Show, told me I had carte-blanche to riff on anything I wanted, which I so appreciated. Johnny Carson even sent a message to my dressing room telling me that if he asked just one question, and I wanted to go on for fifteen minutes, that was fine with him!) But Joy needed it worked-out before, almost word-word, and so, I obliged. I came up with some pretty good material, too, I’m surprised to say.

Someone had seen this new show on Monday night and told me what an absolute bi-atch she was, so, having never even heard of her, I tuned-in Tuesday-Thursday, just to know what I was in for. It didn’t look good.

So, I got to the show Friday night, and was in the make-up room, in my signature clown pants at the time, my hair up for make-up, with just the base that they apply to your face to make it like a blank canvas to paint your face on. Joy walked in, and, I’m ashamed to say, I kissed her ass, to make sure she was nice to me on the show.

So, just a short time later, out I went, in an adorable and colorful skin-tight outfit, with great hair and make-up, and looking pretty snazzy, I must say. The hatred in her eyes was frightening. Instead of the agreed-upon opening, this witch cried out, in her awful grating voice, “What a transformation!” (I still hear it in my nightmares.) She went on to tell the audience, in-studio and on national TV, how awful I looked in the dressing room, and how shocked she was at how good they made me look! Evil of her to begin with.

Then, the worst part, she proceeded to give all my punchlines, that I had written for myself, and therefore gave me nothing to say back! It was an absolute nightmare, and almost the entire staff apologized to me after. The talent co-coordinator rushed right into my dressing room the second after my segment, white as a ghost. It was that awful.

I tell you this not to take away from my thoughts on Chris Brown’s situation at Good Morning America, but to support his claim of being blind-sided over there. Trust me about how easily that can happen. Robin Roberts always seems nice, unlike the rotten Joy Behar, so maybe she got the wrong notes herself. But she has put out statements saying that she asked him if she could pursue that line of questioning. I doubt that she herself asked him for permission, and I highly doubt that he granted it. He seemed really perturbed with it during the brief interview, and tried to steer her away from it at least two times.

So, this morning I read that he has publicly apologized for his angry behavior in the dressing room after. I contend that he has nothing to apologize for–he let off steam behind closed doors in his dressing room, not in front of anyone. I feel that ABC owes him the apology for trying to use him to get a leg up in the super-competitive morning show race. Very shameful of them.