So last night, Broadway’s Tony Awards were handed out, and of course, for my classier readers, I have some random thoughts on everything about them. They’re listed kind-of in the order of the show, but sometimes a thought struck me later.

I can’t believe how much I liked Sean Hayes, especially his superb piano-playing, which I thought was going to turn-out to be a gag, until they showed a close-up of his hands flying over the keys! Very impressive. I had watched a whole episode of the dreadful Will & Grace only once (to see Bobby Cannavale, whom I loved in The Station Agent) and I was definitely not a fan of Sean’s over-the-top stereotypical acting-style, (I hate that on anyone,) but as Tony’s host, he was adorable, charming, and naturally funny. 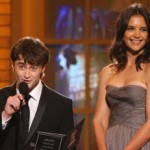 So, he announces that Danielle Radcliffe, probably the shortest non-dwarf actor I’ve ever seen, and Katie Holmes will be playing the Robert Morse and Michelle Lee roles in the revival of How To Succeed In Business Without Really Trying. First of all, no one, not even Matthew Broderick who did it a few years ago, should ever be allowed to touch Robert Morse’s iconic role! It’s sacrilege. But just because the originals were mis-matched height-wise, that doesn’t mean that all actors have to be in that configuration! Then, here come the new duo, and it was uncomfortable to think of them as portraying a couple. They were so mismatched that they didn’t even look like mother and son–they looked like a ventriloquist and her dummy!!!

And while we’re on Katie, did you see her weird boob situation, with them coming out very oddly over her dress? It looked like she had four of them! And with the homeless person hair she was rocking, she looked like a nerdy girl trying to get dressed-up for prom, rather than a major star. Very weird style choices.

And did you notice that Antonio Bandares’ accent is getting thicker? He’s turning into Ricardo Montalban! And even though this has noting to do with the show, I must apologize to him because I 100% thought that he would wind-up leaving, or cheating on, Melanie Griffith within a year of marrying her, and look at how long they’ve been going strong. My bad.

As the show progressed, I couldn’t help wondering if there were any non-movie-star-or-British nominees?

It used to be that actors had to become a stage star first, and prove their chops, and then be offered movies. Nowadays, it seems that Broadway chooses big names in film and television as much as possible, to attract theatre-goers, which seems kind-of insulting to real stage actors. Shame that it’s come to that.

And, they even announced presenters as “Academy award nominee” such-and-such. At the Oscars you never hear anyone being announced as “Tony award winner…”! I know that the Tonys producers want a bigger audience, but I just hate having them dumb it down, so to speak. I’ve always enjoyed discovering stage actors on the show every year, and becoming aware of them, in case I wanted to watch their progress down the road.

I noticed that choreographer Bill T. Jones won once again. I don’t get that, because, in addition to not enjoying his choreography in either Broadway show he won for, I saw his own dance company perform once, and let me tell you, it was the worst dance company I’ve ever seen…and I’ve seen Dance Of Malta!!!

Once again, my brother, Eddie Salkin, was in the band for the show, which is a major honor in Broadway circles. And though we’re far from friends, ( I hope you enjoyed that alliteration,) I’m always proud of him and impressed with his talent.

Kelsey Grammar and David Hyde Pierce are just so pretentious, even in their entrance together. I just never got the success of either, unless you’re a fan of fake English accents, so Madonna and Oprah must love those guys!

As I watched one of the winners, Katie Finneran, rush onstage, all I could think of is why would a snow white chick wear a white dress? Then, just as I was telling myself to give the girl a break, she tells kids who are interested in a career in theater to keep pursuing it because they’ll have “an extraordinarily blissful life.” As actors ourselves, Mr. X and I looked at each other, and simultaneously asked, “Is she nuts???” A career in theatre is guaranteed heartbreak, not what she said! Mr. X said that blissful life she promised is for the very, very few and the very, very lucky, and that her statement is as mis-leading as some armed forces posters, promising you’ll see the world!

Okay, Mark Sanchez is handsome and has gorgeous giant hands, but he is seriously a major stretch as a Tony presenter! They billed him as a “theater aficionado.” So, next year, it better be me up there because I’m a fan, as well, and at least I have some theatre credits, even though the closest my acting got to Broadway is off-off. He actually did a good job, though, and a million times better one than the guy from Green Day.

Kristen Chenoweth did great in all her bits, especially the fake acceptance speech. Clever idea. Except for that her dress just accented her wide hips on her tiny frame, and looked awful, I’m afraid.

Levi Kreis, who won for Million Dollar Quartet had a great statement: He thanked someone for “…making me more available to my good.” I wish that someone would do that for me! 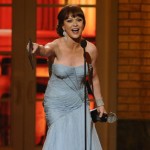 When did Catherine Zeta-Jones become an older mother type??? It seems as she became a more serious kind-of actress, she got less gorgeous. There are so many older actresses who I can never believe were gorgeous when they were younger, like Lauren Bacall, so kids may not realize just how beautiful CZJ was. And that was just a few years ago! Weird.

And why did she and co-star Angela Lansbury both lose their voices? What goes on over at A Little Night Music?

Speaking of mystery duos, why did Viola Davis (who graduated from the same college theatre department as I did!) and Denzel Washington not acknowledge each other in their acceptance speeches? Very, very strange.

Back to CZJ for a second. Not her exactly, rather Bebe Neuwirth missing a golden opportunity for a funny line off CZJ. The last person she had thanked was her husband, Michael Douglas, by saying, “ …and that man there, who’s a movie star, and I get to sleep with him every night!” Bebe had been lamenting being left out of the nominations, so when she came back on immediately following Catherine’s speech, she should have said something like, “Great!–I’m not nominated and I don’t get to sleep with a movie star!” I guess that’s why most actors have script-writers.

Paula Abdul??? Presenting at the Tonys??? Who’s next? Ocotomom?

Cate Blanchett is great, but she looked like either David Bowie or Olive Oyl. Or any young boy British actor from black and white movies. The combo of her skinny arms and pointy shoulder pads was too much to take.

I never realized that authors of plays don’t get their own category!!! If the play wins, then the author wins, but what if you write an incredible play on the page, and then the director and actors mess it up for you??? How is that fair?

I really like Matthew Morrison on Glee, and I’m sure I would have appreciated his shirtless abs in South Pacific, but the number he performed on the Tonys, (which once again took advantage of success in another medium, I must point-out–trust me, they would have never had the guy do a number on the show if he were just another Broadway baby whom only New Yorkers have heard of!) was one of the gooniest, lamest numbers in Tonys history!!! I actually stared thinking he was gay during it, when I’m pretty sure that he’s not. I think. (Along the lines of the musical question from Legally Blonde–Is He Gay Or European–I was asking Mr. X if Matthew is gay or just a musical theater actor.)

Even though Lea Michele was far from her best singing Don’t Rain On My Parade as she perambulated down the aisle, how long till someone revives Funny Girl for her? Perhaps even with Babs directing??? (I have a feeling they’ll owe me a royalty for this idea, that they’ll never admit was mine.)

I know American Idiot is designed to appeal to Green Day fans, but it’s really just stupid and inconsiderate of the producers to have so much strobe-lighting, even if it’s just in the one number we saw on the telecast. There are very many people with seizure disorders out there, and they could even have possible fatalities on their hands! (At the very least, a lot of dizzy, nauseous patrons, who will hopefully demand their money back.) Plus, I feel bad for all the bumpkins who visit NY each year, and stand on the TKTS line for hours, trying to figure out the best show to spend their hard-earned money on, and asking strangers for advice. Some nut will recommend this show, and when they see it, they’ll feel like American Idiot(s.)

Okay, that’s it for this year’s Tony awards. I have to go re-watch the show now to tell my little mother just where to look for my saxophone-playing brother.