Trending
You are at:Home»DINING»KAREN’S MEMORIES/DINING: THE END OF AN ERA: THE CLOSING OF STAN’S DONUTS IN WESTWOOD
By Karen Salkin on April 28, 2020 · DINING, KAREN'S MEMORIES

THE END OF AN ERA: THE CLOSING OF STAN’S DONUTS IN WESTWOOD

When I arrived in Los Angeles as a teen-ager, I had no intention of making it my home; going cross-country was just my summer activity. So when I decided to stay here, against my parents’ wishes (and therefore without their financial help,) I had to get a job. Up until that point in my life, my only jobs in Brooklyn had been baby-sitting and modeling! Neither of those occupations exactly prepared me for the real world. 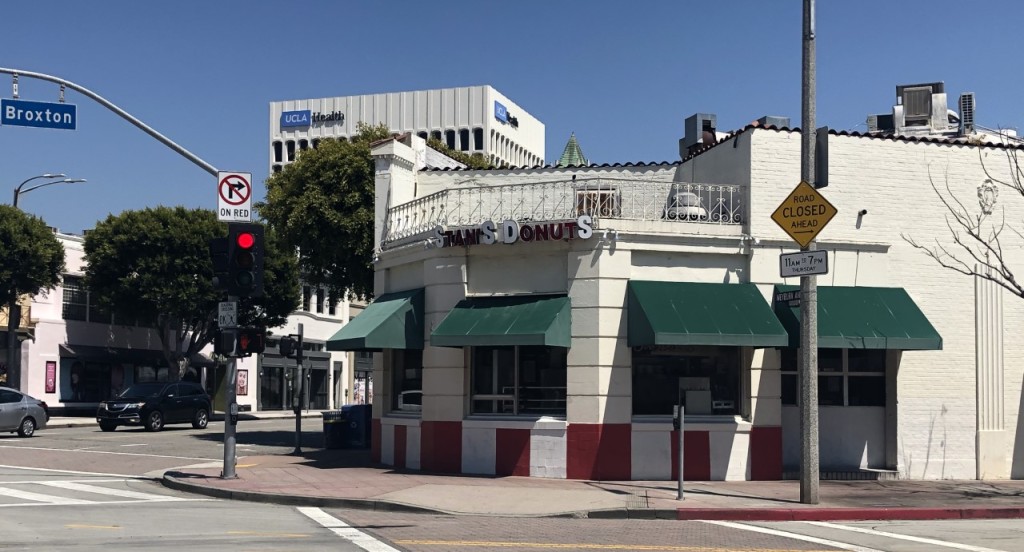 Stan’s Donuts in Westwood. That last window on the right side is where I worked back in the day. Photo by Karen Salkin.

So the guy I had started seeing out here, who was the manager of a record store in Westwood Village, recommended me to Stan Berman, owner of the already-famous donut-and-hot-dog place, The Corner Shoppe. [Note: It was later re-named Stan’s Donut’s.] Even at that young and inexperienced point in my life, I knew that gig was something special. And, sadly, now, after fifty-five years of existence, that place is no more. Stan decided to close the place much earlier than he would have otherwise, as many others have at this same time, because of the Coronavirus situation.

Most of my stories about The Corner Shoppe have to be told verbally, so I do just that in my latest YouTube video, which you can watch right here: www.youtube.com/watch?v=TppggJU8So4&list=UUF7mwI2jwcB2xB9dBCBxLZg. 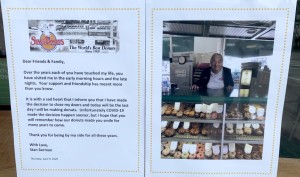 What was posted in the window of Stan’s Donuts, on the last day of the iconic business.

I met so many fun people there, both the customers and my fellow employees. And let’s not forget about seeing all the UCLA jocks!

Kathy, the sister of the guy I was seeing, was the basic donut girl, and became my roommate that year, but the early morning and week-end donut girl, Judy, became my life-long friend. (Well, not literally life-long, because we met when I was a teen-ager, but you know what I mean.) Just about every age-appropriate guy, (and many who were not,) asked me out, or at least flirted with me. And some were just kind people, interested in a young girl who had recently arrived from New York, all by her lonesome. That concept even still boggles my mind! In my entire life up to that point, I couldn’t even walk to the corner grocer by myself! (And I’m not exaggerating about that, not even one little bit.) 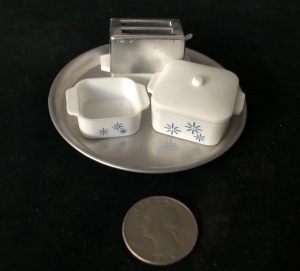 Part of the teensy-tiny houseware set a nice man bought me when I was a teen-ager working at The Corner Shoppe. I put that quarter in the pic just to show you how small the set is. Photo by Karen Salkin.

Upon hearing that I finally had to find an apartment for myself, (because up until then, I had emulated Blanche DuBois and depended on the kindness of strangers,) one man, who was just a kind middle-aged store owner in the area, ran out and bought me a tiny doll-sized CorningWare set, to start me out on living on my own. And to cheer me up about having to do that for the first time in my life. And guess what? I still have it!!! (In my way overcrowded house, I even knew where it was just now, to take this picture! That feat is the true definition of amazing!)

But that’s how Westwood Village was back then—it really did seem like a little village, with everyone knowing everyone. I literally lived my life right in and around that microcosm; I knew everyone and they knew me; I made fast friends all within a very short period of time. Most of the workers in every business in those few blocks was also young, and we all looked-out for each other. (I really was the youngest one, and a stranger in a strange world, and always friendly, so everyone just seemed to automatically take me under his or her wing.) I totally lucked-out to land at exactly the right part of Los Angeles! (The original look of The Corner Shoppe can be see in the background of a scene of Once Upon A Time In Hollywood. It’s across the street from the movie theatre that Margot Robbie, as Sharon Tate, goes to see herself in a movie. That took place way before my time there, but the edifice even still looks virtually the same today, just with the new name up there.)

Margot Robbie in Once Upon A Time In Hollywood, with The Corner Shoppe in the background, looking like it did in the early days.

Even though The Corner Shoppe was mainly known for its vast assortment of delicious donuts, I was the hot dog girl. Go figure. Always the rebel. I was headquartered in a tiny area of the other side of the corner space, where we offered hot dogs and Orange Jubilees, which was basically Orange Juliuses, with a different-but-similar moniker. Most of my customers were served on the outside counter, where they sat on stools on the sidewalk, right at my big serving window. What an enjoyable experience it was for everyone, me included.

Stan didn’t allow us workers to eat the more costly hot dogs, but we could devour as many donuts as we wanted! And we could take a box home, every day, which, of course, this poor girl did all the time. So ergo, I can’t even smell a donut anymore without feeling sick. I haven’t eaten, nor even looked at, one of those things since I left that employment! (For the story about me actually losing my lunch in that exact location, you’ll have to watch my new YouTube video—it’s too complicated to write. Here’s that link again: www.youtube.com/watchv=TppggJU8So4&list=UUF7mwI2jwcB2xB9dBCBxLZg.)

Some of Stan’s famous donuts.

Over the years, the hot dog side became other fast food enterprises, but Stan’s Donuts remained steadfast.

All entertaining anecdotes aside, I’m honored to have been an infinitesimal part of Los Angeles history. Even though Stan Berman has finally retired, (and I wish him a wonderful rest-of-his-life) and someone new will be coming into that space when the world gets back to normal, it will always be The Corner Shoppe to me.