Trending
You are at:Home»HOLIDAYS»HOLIDAYS: HAPPY PASSOVER AND EASTER
By Karen Salkin on April 3, 2015 · HOLIDAYS

Even though both these holidays are about resurrection and seriousness, they’re happy ones. The Jewish people celebrate being passed-over for death, and Christians celebrate their lord rising from the dead.  Or so I understand; I’m far from a religion scholar.  Or a religious one, as I had at first erroneously written.

But I love both Passover and Easter.  Guess why?  Think of what they have in common. Ready?  Lots of delish, once-a-year foods, of course!!!  (Or, as Mr. X just correctly guessed, “They both involve chocolate!” Like, dark chocolate-covered matzahs—OMG!) So, I celebrate both!  (But only one in the religious sense.  The one with my own peeps, of course. Wait—not the “Peeps” marshmallows candy—that would be an Easter treat.)

But none of my pals here are much fun anymore.  Very few pals have seders in LA; they’re usually going to ones, at homes of people I don’t know.  So, I don’t know if I’ll even be enjoying a seder this year.  But I can still get the food to have at home by my lonesome.  (Mr. X will be there with me, but he’s not Jewish, nor a fan of ethnic food. So—more for me!)

The juxtaposition of the two holidays this year is bringing me some wonderful memories, though.  They were in the same order when I came here as a teen-ager, knowing absolutely no one. 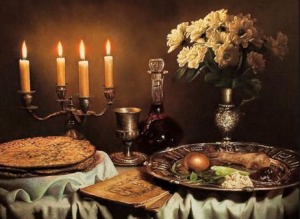 On the first night of Passover, I went to my new friend Ginny’s mother’s house, in the beautiful country-esque area of Pacific Palisades. For the second seder, she and I went to her father’s apartment in a high-rise in Westwood, which I thought was the absolute classiest place you could be in this town.

And the next day was already Easter, just like it is this year. I spent it with my favorite family in those days, the Cardozas. My friend, whom I always referred to as “The Beautiful Desdemona,” had one of the two most interesting extended family I’ve ever met, still to this day. (The other is the Hazel clan in Rhode Island, with whom I’ve always spent my absolute favorite Easters.) That initial LA holiday week-end is still one of my favorite time-spans ever, one that I’ve never stopped appreciating. 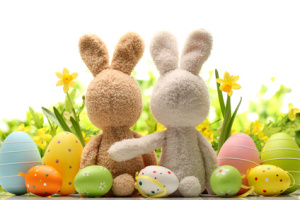 But that was a simpler time. No one I know is doing any celebrations this year, except in New York, where my presence was, gratefully, requested. And I have been invited to a gigantic Vietnamese celebration…at Pechanga Casino!!! (I really wanted to go that one, but, as I said, none of my pals are fun anymore. Except out-of-town ones.)

My Colorado friend, Carol, always sends a mixed holiday card to Mr. X and me. I have no idea how she finds those missives, year after year! This year, the card will hit the nail on the head, because of them being at the same time.

So, I’ll be celebrating with a couple of non-related fetes, binge-watching the six hundred hours on our DVRs with Mr. X, obsessing over the NCAA Tournament Final Four on Saturday, and resting-up for next week’s MTV Movie Awards Suites. And you know what? All that will be celebration enough for me.

So, no matter which you’re reveling in this week-end, I wish you an absolutely wonderful Passover/Easter. Enjoy whatever it is that you’re doing! And have some matzah ball soup, and chocolate bunnies, for me!