Trending
You are at:Home»HOLIDAYS»HOLIDAYS: HAPPY EASTER AND PASSOVER 2020 (YEAH, RIGHT)
By Karen Salkin on April 10, 2020 · HOLIDAYS 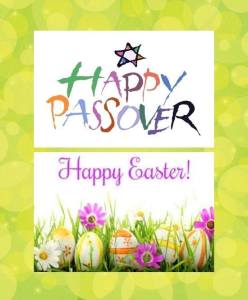 Easter and Passover are occurring together again this year, which I usually get such a kick out of.

But the point is moot this time, since none of us can celebrate together right now! Let’s be honest—that sucks!!!

The Passover plagues are correct this year! Even leaving politics out of it (because these are religious holidays, after all, so I’m biting my tongue on the topic of Orange Nero,) the Coronavirus itself can rightly be labeled a plague.

But desperate times call for desperate measures, including in the kitchen. So, to that end, I’m doing the cooking this Easter and Passover! 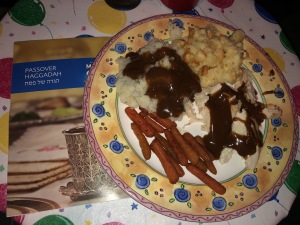 My 2020 seder dinner, cooked by very own hands! Photo by Karen Salkin.

I assumed my efforts would be for really just myself on Passover because A) Mr. X isn’t Jewish, and B) he isn’t a fan of chicken nor mashed potatoes. But I’m happy to report that he did join me! Nothing was fancy, but I was shocked to see him eat those two dishes. It was my first time making mashed potatoes from scratch! With real potatoes, not powder or frozen ones. I was so proud of myself, so I was thrilled that he liked them. (And now I’ll use the leftovers for cheesy potato pancakes on Easter! I may not cook too well, but I do always plan a mean menu!)

I’ve never cooked a Jewish meal before, but now more than ever, I feel the need for a little spirituality. And to remind myself that this, too, shall pass. And that I want the virus to pass over our house! I don’t have official seder cooking supplies, so I made do with leftover chicken, mashed potatoes, pre-made apple kugel, and creative carrots, which was my pièce de résistance. 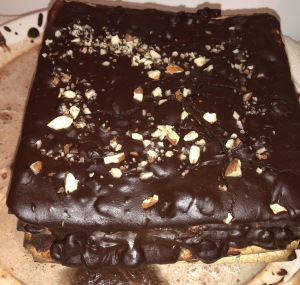 My Tower of Matzah that I whipped-up the other day. Photo by Karen Salkin.

Okay, okay, I did make a weird Passover dessert that I labeled Tower of Matzah, but I was seriously lacking the correct ingredients that were included in a myriad of recipes I found on-line, so I fully expected it to be somewhat of a disaster. (Here’s a baking clue: half-and-half is not a substitute for heavy cream, no matter what cooking sites may tell you! Trust me on that!) Mr. X and I waited until night two of Passover to try it, and the verdict is…it was absolutely delicious!!! That was actually pretty much of a shock to me. It was so good, in fact, that I’ll try to give you my recipe next week. So save about eight to twelve full-size pieces of the matzah you’re using this week! It will be a fun isolation treat to make. 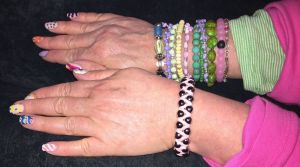 The Easter nails…I did myself! These are from 2018, but I do a new verison every year. Except for this one. My nails are in isolation, along with the rest of me! Photo by Mr. X.

Now, Easter is an entirely different situation! I’ve always been known to celebrate that fun holiday in style! (But, my Jewish readers, please don’t panic–I see it as bunny and pastel colors time, not Jesus and the cross.) I actually made a really fun Easter party for my brother when we were little. His birthday is in August, so he never got to celebrate with his school buddies. So my mother let me put together an Easter fete for him, (complete with my homemade Pin The Cottontail on the Bunny game,) which is still one of my proudest moments in life, even though I doubt he remembers it. (He’s conveniently forgotten everything I’ve ever done for him, but oh well. I still would not change a moment of it!) 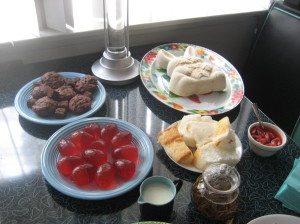 Just one of my TWO dessert tables in the Afternoon Tea I threw at my house, back in the day. Notice the Jello e-words and pudding bunny! Photo by Karen Salkin.

In more recent holiday history, I’ve been making Jello e-words and pudding bunnies for probably over a decade now! I bring those to the home of whomever is hosting the dinner, which is never me, (something I’m sure everyone gives a bit of thanks for!) Wait—I stand corrected! The year that my major back issues began, exactly ten years ago, I threw an Easter Afternoon Tea at my house! Mr. X was out of town, and I couldn’t even really stand-up because of the pain, but somehow I thought entertaining my pals would be a good idea. And you know what? It was!!! We had a lovely time. It was all perfect! A friend came over the day before to help me bake and make some finger sandwiches, while a couple of the ladies made their own sandwiches to fill-out the menu. And I always have tons of fun teas on hand, so that part was a no-brainer. I even broke-out the flowering ones, so we could all ooh and ahh over them. I still marvel that I did it all, while in the most pain of my life! I guess the lure of afternoon tea is a healer. 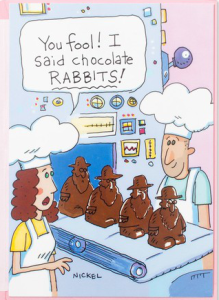 Wait again—in talking to a friend just now, I realized that I did once make a Passover seder!!! It was at my mother’s house in Brooklyn. After my father died in February 1999, I went home as often as I could, to keep my little mo company. I threw fetes at the house on a lot of those trips, to entertain and exhaust her. That way, she had a wonderful time when I was there, but was too tired to miss me too much when I left. Brilliant of me, right?

So, in one of those trips, I actually made a seder for a couple of my friends and some of my mother’s. But, I didn’t cook it, of course—I just got prepared foods from all different restaurants, so it would still be a unique meal, one that they couldn’t get elsewhere. It’s a whole fabu story, so since you all have nothing but time now, you might like to read it right here: itsnotaboutme.tv/news/holiday-happy-passover-2014. I promise—it’s a good one! 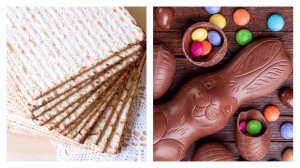 So I’ll leave you on that happy note.

And no matter how you’re celebrating (or not) either or both holidays this year, I guarantee you’ll remember these festivities, or even mere observances, for the rest of your lives, so make the most of them, with others, online, or even by yourself, with the little you have on hand!

I wish you each a wonderful Passover and as happy an Easter as possible!