Trending
You are at:Home»HOLIDAYS»HOLIDAY: HAPPY THANKSGIVING 2014
By Karen Salkin on November 26, 2014 · HOLIDAYS 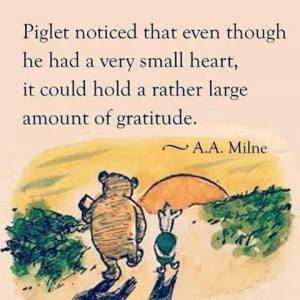 This picture has nothing to do with my story here, but I’m in love with Piglet, and this says it all.

Wow; on this fifth Thanksgiving column that I’m writing for INAM, I feel like I’m finally out of ideas for something new to say about the holiday.

To give me some ideas, I just read all four of my previous ones, and I was shocked to see how varied they were! I love it. So, now I’m giving thanks that I wrote at least four good columns over the years!

Looking back at those Thanksgiving articles, I discovered some things I’ve been grateful for, (and they all still apply,) some suggestions of things to do on this four-day week-end, and even some little holiday anecdotes. 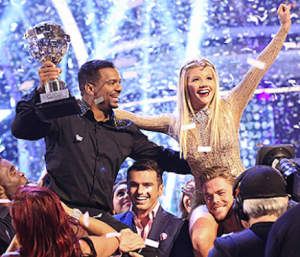 On a shallow note, since the Dancing With The Stars finale was just last night, I’m, of course, grateful that Alfonso Ribeiro and Witney Carson won this season. I’m as happy for her, (the pro) as I am for him, (the star.) She’s so sweet and adorable. And a non-skinny successful professional dancer!!! And I give thanks to those of you who read my plea to vote for them, and did so!

Now, to not repeat myself from the past years, I’m going to tell you my favorite personal Thanksgiving story. I can’t believe I never did before!  (Perhaps I did so once on my show.  I have a feeling it’s better verbally than in writing, though, but, oh well. I don’t have the energy to do a YouTube video on this one. And I can’t find my key visually aids, so please try to picture it.)

When I was a young elementary school teacher here in Los Angeles, I had second and third graders in a combo class.  For Thanksgiving, I had them do collages of Things To Be Thankful For.  [Note: Collages had been my specialty in junior high school.  My ninth grade teacher thought I was an artistic genius because of my collage skill, which I had not even ever thought of before he went nuts over mine.  So, I liked to pass that skill on to my school kids.]

My students each had a choice of what size paper to start with; either 8×10, or the bigger 10×12.  I had brought in all kinds of magazines for them to cut-up, all with tons of pictures of things to be grateful for: family, toys, food, clothing, you name it.  And I made sure that they all understood the assignment.

At the end of the period, I asked if they were done, which they all said they were.  I collected them, and took them home to mark on the back.  In that one class, I had every level of brain power, from geniuses, who were performing way ahead of their age group, to kids who were still at kindergarten level in their knowledge.  My two favorite kids were probably at the lowest level, Jaime and Joe. (Jaime was the best athlete, and I was worried he’d wind-up in jail, and Joe was very quiet, but the few times he spoke to me, his observations were spot-on.)

This is my artist rendering of Joe’s infamous collage. His pic was of a girl in a bikini on a loungechair, so that’s what I attempted to draw, using a stick figure. But it’s the same size as his! And in the same place.

At home, I went through the same well-constructed-but-boring collages they each made, giving-out good grades.  All of a sudden, I came to one that I thought was a blank piece of paper, that I had taken home by accident.  When I pulled it out form under the one on top, I noticed a teeny tiny picture at the bottom left corner.  On closer inspection, I saw that it was a girl in a bikini!  Turns-out that’s what Joe was thankful for: a girl in a bikini!!! The odd placement of the picture made it even funnier.  I showed it to all of my friends, and still have it to this day! (That’s the key visual aid that I don’t have time to look for right now. But it’s definitely in my house!)

On that note, I hope that all of you have much, much more to be grateful for than that!

And I wish you a happy, healthy, safe, and delicious Thanksgiving.

[Note: If you find yourself too stuffed to do much of anything this week-end, except read and/or browse the internet, and you get bored, here are the links to my Thanksgiving columns of the previous four years: