[Note: I have to admit that I wrote this while watching this week-end’s NCAA Basketball Tournament. I couldn’t give up even one second of the exciting tourney for anything else, and was glued to the TV for over twelve hours per day for the past four days. So, if this piece is a bit rambling and incoherent, please forgive me. I just didn’t want to pass over the chance to wish everyone a happy holiday.]

For those you who love schadenfreude (getting happiness from other people’s troubles,) this one is for you! (But if you’re an Empath like I am, this may make you feel a bit bad, but I swear, please don’t. Then I’d have to feel bad that you’re feeling bad!) Here’s the scoop: I’ve rarely had a good Passover since I was seventeen! I’ve had a few good ones over the years, but mainly they’ve been disappointing.

I always do Easter nails, but I’ve never even thought of these matzoh ones! The concept, tutorial, and photo are from the fabulous site www.10blankcanvases.com.

I always loved this holiday, and when I was little, I was happy to be helpful to my family in preparing the house. I couldn’t wait to change the dishes to our Passover set. I got such a kick out it. And even though my basic daily breakfast in life at that time was always some form of chocolate cake and milk, I enjoyed switching to matzohs and cherry preserves, (the latter of which I didn’t even like, but I told you–I liked getting with the disciplined program!)

When I was eighteen, it all went downhill. I was going to Florida with some guy pals, just for fun, (I didn’t think things through in those days,) and my best friend Jill needed a ride to visit a guy friend down there. So, always wanting to help a pal, I told the guys we had to take her with us. They agreed, but when we got down there, they wanted to stay in Gainesville, and she needed to get to Miami. I wasn’t going to let her travel alone, (don’t ask how we traveled in those stupid days,) so I had to give up my plans to go with her, which she was grateful for.

But when we got down there, her pal we were staying with, Bobby, was far less than thrilled to see me. He had planned to “get with her,” and I put a kink in his plans. Needless to say, I had an overall horrible time, but Passover was the worst. Even though she and I are still great friends, I still can’t figure out how a nice girl like she could have flat left me that night. Bobby invited her to his family’s seder, and said they didn’t want me to come. Yeah, right, I’m sure a parent would have said that! Jill should have declined to go without me, but she didn’t, and, not wanting to be a bad friend myself, I didn’t suggest it. But I still feel awful about it all these years later.

I had a couple of very old relatives down there, whom I barely knew, but I had visited earlier that week. So, I decided to be a grown-up and call them to ask to join their seder. To my shock, and the eternal disgust of my father, his uncle’s wife said they didn’t have enough chairs!!! Since when do Jewish people not make do??? So, I sat in Bobby’s apartment alone, and dreamed of brisket and my mother’s matzoh ball soup!

The next year, I was already living here in Los Angeles, and all my new friends and their fams were great to me. I still count that first weekend of two seders and an Easter party as one of the best of my life! I’m always grateful for those memories.

So, a few years later, I started doing my show. I did an afternoon one on the day of the first seder. It seemed that every single Jewish pal of mine came to the taping, and then they all left…to go to a seder! Not one of them invited me! Mr. X took pity on me, and even though he hates going out to eat, he took me to…a Mexican restaurant! (He’s not of the same ethnic persuasion as I. Could you tell?!) As I sat there crying into my quesadilla, delicious as it was, he said he thinks what happened to me that night was the beauty queen thing–no one asks her out because they assume that everybody else did!

And you know what? He was correct! The next day, everyone asked how my seder had been! They each had assumed I’d gone with someone else!

It’s been up and down since then, including some really fun ones. A few years ago, I made a seder myself at my mother’s house in Brooklyn, with some of her pals and some of mine, and it was great! Even my non-religious mother loved it! (I did, too, until everyone left, and looking at the sink piled with all the dishes, I remembered that my mother didn’t have a dishwasher anymore!) When I lived in Malta one year, I got a group together, and we made our own “kid”one. I’ve been invited to the home of a pal’s ex-husband’s new wife! And several fans have invited me over the years. There have been some other fun ones, and I’ve turned down the ultra-religious ones, even though I still appreciated being invited to them. 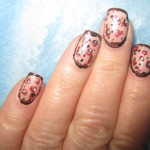 My attempt at the matzoh nails. But I used too dark a base color; I had looked at just the step-by-step tutorial pix, and not the finished product ones that showed a much lighter color. Next year they’ll be perf! Photo by Karen Salkin.

But I had one more bad experience some years back. I had been invited to the home of a couple who were both individually my friends. I knew all their many family members really well, and they knew all of my friends. One of my other best pals had just lost her grandmother, and being still a young girl, she was crushed. Her family cancelled their seder, of course, but she was a mess. I asked the host husband if I could bring her, since she was like a little sister to me, they knew her well, (they even called her “Little Karen,”) and they had a giant home with tons of food. He said of course, and my pal and I were thrilled and relieved. And then he called back and embarrassedly told me that his wife said no. That made me not want to go either, but my young pal insisted. So I went, and then cooled my friendship with this powerful couple after that. I can’t respect unkindness.

And there are years like this one, when I’ve been so otherwise engaged, I didn’t even know the holiday was upon us! I guess I don’t know many kind folks anymore, who could have reminded me. But one did, and I’m going to her seder, which should be low-key this year, which is exactly what I need right now. I’m not really up to an extravaganza. And all I’m doing is trying to pay tribute to my heritage anyway.

So, there you have it–the yin and yang of my many Passovers. I don’t know what possessed me to share them with you this year, but I figured it’s a more interesting read than just writing a generic “Happy Passover to my Jewish readers.” I hope I was correct. And that you all have a good one, of course! Now I have to run out and buy some chocolate-covered matzohs, which will make this Passover a good one, no matter what else happens!