First of all, let me welcome in 2020, which is not the beginning of the decade. (More on that a bit further down.)

And Mr. X and I started the year off right. We rang it in at my friend Heidi Rotbart’s fabulous New Year’s Day PJ Party brunch. This woman is definitely the hostess with the mostess!!!

Many of you ask why I don’t throw my January 14th birthday extravaganzas anymore. One of the answers is that my own celebration can’t possibly be as wonderful as Heidi’s parties that are just a mere two weeks before my b-day, so why even try? 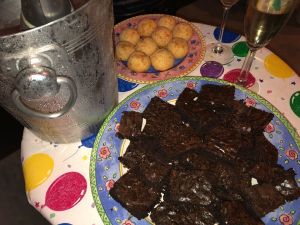 The night before. The cheese puffs are what Mr. X and I “dined on,” and the brownies are what I baked for Heidi’s party the next day. Photo by Karen Salkin.

We love this fete so much that we chose it over going out on New Year’s Eve! We know that we could not party hardy until the wee hours on December 31st, and then go out the very next morning, so we stayed in the night before. But do not feel bad for us—we love just being cozy and romantic at home, feasting on bad-but-fun food we would not eat any other night of the year, and watching the ball go down in several time zones. But poor Mr. X—I hate the taste of alcohol, so I join him in just the teensiest bit of champagne. Which means he drinks most of the bottle himself. 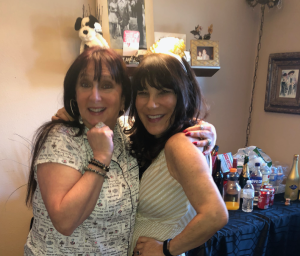 Karen Salkin and Heidi Robart. (And no–Karen is NOT rocking that stuffed dog on her head–it’s on the shelf above.) Photo by Mr. X.

For her fab event, Heidi asks us all to wear pajamas, which makes this food fest extra fun. I give many props to us good peeps who do as asked. I love seeing the entertaining outfits we all come up with. But some people are grinches and show up in regular clothing. I told Heidi she should not let guests in next year if they show-up with not even a semblance of bedtime attire! I wore an entirely new ensemble for it, except for my adorbs slippers (which would have won the contest had there been one. But, let’s face it—fashion is always an unofficial contest, especially to me!) Mr. X even got into the swing of things with his PJ bottoms. When he saw how many males thought they’re above the theme, he felt a bit uncomfortable at first. But when we got home, and he realized that he did not have to change, he was thrilled with Heidi’s pajamas request! (And here’s something fun—as we were just walking down the street on our way to her house, a family walking towards us asked, “Are you going to Heidi’s?” Mr. X was amazed that they knew. He didn’t figure it out that it was because we were wearing our PJs!) 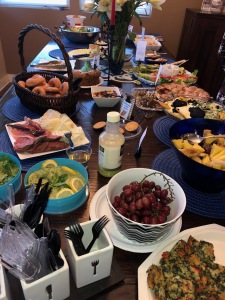 Just a teensy bit of the vittles! Photo by Karen Salkin.

But no matter what anyone wore, the main attraction there, as always, was the sumptuous buffet! (So sumptuous, in fact, that it was actually served on four buffets!!!) It was all just brilliant. Because it’s a potluck, Heidi always has the perfect mix of hot brunch items, creative side dishes, salads, all kinds of interesting breads and such, and desserts. This time, there were even McDonald burgers and Kentucky Fried Chicken!!! And there was plenty of it all. She was even kind enough to put standing signs by each dish, which helps so much. I hate when people don’t think to identify the food!

There was even an entire room dedicated to just beverages. It featured all kinds of drinks, from soda and OJ all the way to multiple bottles of champagne. 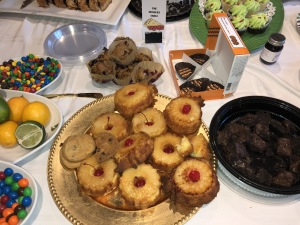 I panicked at first when I found-out that my perennial favorite dish at Heidi’s soiree, Grand Marnier French Toast, was not there this year. I had literally been craving it for the entire week before! But my yearning quickly faded into the background when I discovered incredible noodle pudding, blueberry blintzes casserole, maple honey bacon, and the second best cheesecake I’ve ever tasted! (I’m sure that fans of Karen’s Restaurant Revue remember my love for the late lamented Butterfly Bakery’s cheesecake, which was like no other in the whole world. So to come in second to that unique one is, indeed, very special.) 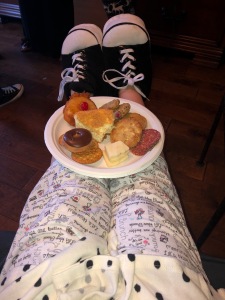 A plate of desserts, balancing on my legs. It’s just a clever way to show-off my adorbs over-sized Little Lulu sneakers SLIPPERS! Photo by Karen Salkin.

This year Heidi also did something new (which I totally appreciated.) As we walked in, there was a guest book for us to sign, (an activity that has always been a staple of my bday parties—it’s great for memories,) and wear name tags, which were actually attractive. I’m sure it really helped a lot of guests. One man wrote “Brad Pitt” on his, which I’m still wondering how many other people noticed.

All in all, a great time was had by all. I woke up today wishing that the year was already over so that we could immediately go to Heidi’s New Year’s Day party next year!

Now back to business. If you missed my explanation of why 2020 is not the beginning of a new decade, (which I discusses in my New Year’s Eve column,) here it is again: 1 through 10 is one decade, 11 through 20 is another decade, and 21 through 30 is another, and so on. So the end of this decade is really not until December 31, 2020. As my friend Barbara Burton wrote on Facebook, “I guess many people are unaware that we are just entering the last year of the current decade, which will end a year from today.” So I know that at least one other person gets it! 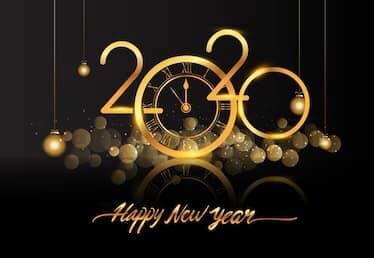 To celebrate the New Year, I’ll be live-tweeting the Golden Globes on Sunday. Yes, I know they’re coming really early this year, but so are all the awards shows! The Grammys are even this month, and then the Oscars are at the beginning of February!!! Everyone keeps asking me why they’re all so early, like I’m in charge of show business, but I have no answer other than the world is moving waaay too fast these days! So Happy New Year to all of us! (And don’t forget to follow me before Sunday. @MajorCelebrity. I’ll try to curb my snark a bit this time. It’s too early in the year to have it in full gear yet, anyway.)

And Happy New Year to all of you, my loyal readers! To say I appreciate you all is the understatement of the decade! (So far.)