Trending
You are at:Home»HEALTH»HEALTH/KAREN’S TIPS: THE HEALTH AND SOUL BOOSTS OF STUFFED ANIMALS
By Karen Salkin on June 20, 2018 · HEALTH, KAREN'S TIPS

THE HEALTH AND SOUL BOOSTS OF STUFFED ANIMALS

Last week, there was a really terrible fire right near my house. It was less than a mile away, and as Mr. X and I watched the horror unfold on TV, waiting to see if they would tell us to evacuate, we realized that we need to make “go bags,” even if not for that exact day; there have been tons of fires in our area recently. 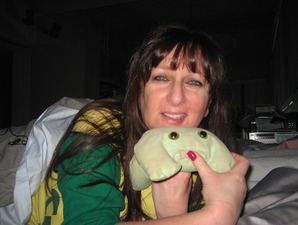 Terrible pic of Karen Salkin and her best friend, Froggy, taken on her exact middle-of-the-night birthday, which is why they both look so freaked-out by the extreme flash! Taken by…Karen Salkin! (But shh…don’t tell Froggy about Karen holding hands with the big dude at the top of this page!)

Mr. X asked me what we should grab if we had to go right then, and my very first word was telling–“Froggy!!!”

Yes, over money, meds, and valuable work, my first thought was of my treasured best friend. Oh, have I mentioned that’s he’s a stuffed animal?! Well, maybe to the rest of the world he is, but not to me. He is truly my best buddy. Froggy has been my loyal companion ever since I first moved out here as a teen-ager. It’s a long story, but we locked eyes in a store in my hallowed Westwood Village and he’s been by my side ever since. (I’ve even given Froggy three or four new bodies over the many years we’ve been together, and did an eye “surgery” too! His latest tongue actually looks just like the one on Clarence, my beloved late toy poodle!)

Yes, I am aware of just how crazy all that sounds, but not to others like me, who are wise enough to realize the health value of having even a non-living entity to love. Grown-ups usually don’t want to admit it, but many have their own version of Froggy. I’m not going to name names, but you know who you are! (And I’m proud of you.)

And let me tell you—he’s been absolutely comforting through thick and thin. I really can’t even fall asleep anymore unless I’m clutching him! I can’t tell you how beneficial it was to have Froggy when my precious Clarence died. He was not a substitute at all, but just having him to hug helped me get through those first terrible nights. (And he still does!)

And you know what—everyone in the world should have a stuffed animal to love. It doesn’t have to be your childhood pal, or even a long-term one, as Froggy is to me. About a year after my father died, I got my mother the softest little stuffed dog you’ve ever felt! The second I gave him to her, she named him, somewhat strangely, “Beauvoir!” Where she came up with that one, even she had no idea, but it suited him. And about a month later, she told me that she didn’t have trouble sleeping anymore! 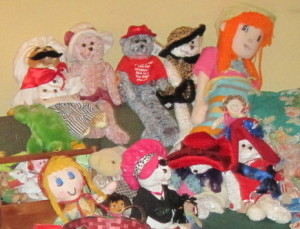 Just some of Karen’s mother’s pals in Brooklyn. Photo by Karen Salkin.

Beauvoir was the one she cuddled up with to sleep, but my little mo was no stranger to stuffed pals! She had started collecting dolls and such years before, long before my father passed. But after he was gone, her collection grew by leaps and bounds, mainly from me, but many of my friends gifted her, as well. Of the three couches in the living room, one was “hers,” one was basically “mine,” (because I visited her in New York so often,) and the third one was “theirs.” And she loved them all. Especially the fabulous singing bears I found in a specialty shop in Rhode Island. She could not get enough of those!

And they really did keep her company and cheer her up. Occasionally I even heard her talking to them, which I totally understood because I converse with Froggy quite often myself. Again, it’s comforting. (Okay, she might have gone a bit overboard by making me find panties for the “naked” animals! But she didn’t want them to be cold!) 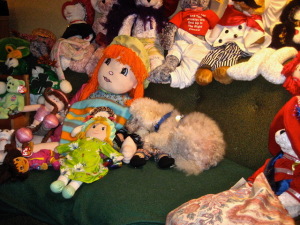 Here’s one of my favorite stories, about all of us! On one of Mr. X and my visits to my mother in New York, we woke-up one morning to find that Clarence, (our real-life dog, in case you don’t remember that darling boy,) was not in my bed. He wasn’t with Mr. X either, (we slept in separate rooms in my parents’ house, which was our own respectful choice,) nor with my mother. We were hysterical. The three of us ran all over the house like lunatics, screaming for him all the way. We even looked outside, just in case. We were afraid that maybe he had crawled away somewhere to leave this level of life. We were beside ourselves!!!

And then my mother spotted him, though I have no idea how. He was calmly sleeping on the couch with her stuffed menagerie. We hadn’t seen him earlier because his fluffy white blended right in with them! So even our adorable little dog loved being around his stuffed brethren. 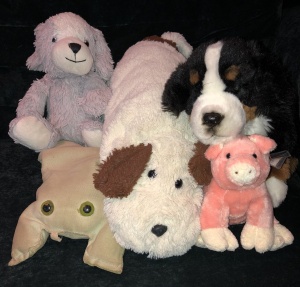 Back to Froggy for a second. He now has his own friends. There’s Doggie, (who Mr. X and I gave my mother for Christmas 2010, so she had him for exactly the last year of her life and she loved him so much,) and Odie (for “Other Dog,” who showed up in my room in Brooklyn one day, and I still have no idea where he came from! Then Mr. X threw him in the washing machine here, by accident, because he got caught in the sheets, so we love him even more because he needs us now.)

And okay, I have to admit there are a few more furry friends hanging around our house. There’s Bernie the St. Bernard, who lives on the living room couch so I can hug him whenever I take a nap there. And he has his own little friend, Little Piggy, because I didn’t want Bernie to be lonely. Okay, so maybe I am a tad nutty. But everything I told you about what help stuffed animals can be to one’s emotional health is the truth.

So if you or your children or anyone you know is having a little bit of a hard time with loneliness, anxiety, depression, or the like, maybe you should really consider giving them, or yourself, a little stuffed animal friend. I promise, you will love him! 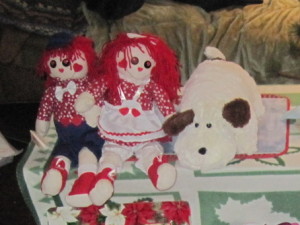 (L-R) Raggedy Andy, Raggedy Ann, and Doggie, all gifts from Karen Salkin to her mother, to further her fun collection of buddies. Photo by Karen Salkin.

The point of all this is—no, not that my mother and I are crazy—that the right stuffed animal(s) can really help your health and soul. I believe their positive effects have been proven by studies more scientific than my observations. Just having someone to cuddle with, and possibly have actual love for, can soothe a broken psyche, if even for the night. And you can always vent to them, with no judgement rendered. And how often does that happen with human confidantes?!

I’m very serious about all of this. If you’re someone who’s in need of a modicum of TLC, but don’t know where to turn, please, please, please, try a stuffed animal. Just make sure it’s the right one. (And if you’re allergic, never mind this whole topic.)

Happy New Stuffed Buddy Finding, from Froggy and me!