This was my third summer in the vaunted Hamptons. The first year, I mostly hated it, last year was quite the opposite, and this year was a mixture of the two emotions. Some of no-enjoying-it had to do with the recurrence of an old arm injury (a bad tetanus injection performed by a less-than-caring-and-skilled doctor several years ago) which informed my entire month in New York.

So, to bring the room up, here’re some of the good and worthwhile highlights of my trip, in the order that I experienced them:

Last summer, I ended my trip with a leisurely Sunday Night dinner at the lovely indoor-outdoor restaurant, Savanna’s. You know I hate to repeat restaurants, but as soon as I got to town I heard that the whole menu had been re-done by the team from T-Bar Steakhouse in NYC, Tony Fortuna & Arthur BaCall.

So, we went right over on a pouring Friday night, and ran smack-dab into quite the scene. No one but me seemed to even notice the rain! The place was packed, even on the semi-covered patio, with a wait of about two hours!!! But my host, Lauren Bennett, is quite the hipster, so waited it out we did, along with just about everyone else in town.

We were rewarded with lovely, upbeat, honest service from Christians, and one of the best dishes I’ve ever had in my life! It was an appetizer of Burrata cheese served with tomatoes and red onion. I seriously ate almost the whole thing myself, spoiling the rest of my meal, but I was in heaven.

Lauren enjoyed the tiger shrimp cocktail, featuring the most humongous shrimp I’ve ever seen, and her filet mignon, which was accompanied by a clove of grilled garlic. I was seriously too full to eat my veal chop, so I brought it home and shared it the next-day with my pal, Scott, who gave it more than a thumbs-up!

What I loved most, though, was that the new regime kept the look and feel of the place the same, while changing the menu and vibe. Not an easy task. On my fall east coast visit, I hope to dine at T-Bar NYC and compare the two. Unfortunately, the very pleasant manager, Tanner, will still be on Hamptons duty. 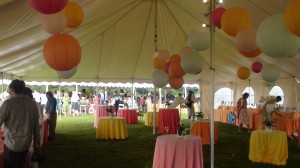 As Lauren schedules five events a day, I sometimes get them confused and don’t have stomach space left for each one. That’s what happened by the time Sunday night rolled around and we arrived at the most gorgeous, peaceful site I’ve been to in the area. I still can’t believe someone lives on this property, and trust me, between Bel-Air, Aspen, and Coronado, I’ve seen some spectacular residences in my day.

The dinner to benefit the Peconic Land Trust (which “conserves Long Island’s working farms, natural lands, and heritage for our communities now and in the future”) took place at the home of the Channings of the Channing Daughters Winery.

Unfortunately, we were there for only the cocktail party, which I spent admiring the pastel tent decorations and listening to the wonderful music of the Merry Makers Steel Drum Band, so I can’t tell you about the food.

But, as this was the first place I had relaxed in the Hamptons, I was grateful to have been there, however briefly.

LADLES OF LOVE/ART OF EATING

If ever an event had my name on it, this would be it! Love and eating? What could be better???

Actually, it gets MUCH better, as this was a benefit concert and food-tasting to benefit

The East End Food Pantry Network, which is a very worthy cause. Between the money raised, the left-over food donated, and the non-perishable food donations brought by the attendees, their event helped very many local food pantries.

Art Of Eating is local catering company whose owner, John Kowalenko, put together this whole event. He got many eateries to participate and each served one or two of their specialties to the assemblage.

There was a concert, too, but, unless it’s Paul McCartney playing, I’m much more interested in the food. The VIPs could do both at the same time (listen and eat), so I sampled the fare, and went to the stage area to pay attention to the music for only the last act, Band of Brothers.

The band consisted of musicians from several famous groups, such as Bon Jovi and Bad Company, and they were great. I was fascinated to see GE Smith, the guitarist and band leader of the original Saturday Live Band, who looks exactly the same as he does on the old show re-runs, which must be at least twenty-five-years-old!!! Unbelievable!

I’d love to single-out the restaurants I liked best there, but it was, happily, so crowded, I just couldn’t keep it all straight. And I never saw an actually menu of who served what. Sorry about that. So I have an idea. If you’re in the Amagansett area next time they do this, (which appears to be in the winter, too), why don’t you attend it yourself, and have a great time while helping out a very worthy charity? And hopefully bump into me with my mouth full. (What else would be new?)