Trending
You are at:Home»GOSSIP»GOSSIP/KAREN’S RANTS: HOW IS WHAT MARLON WAYANS TWEETED OKAY?
By Karen Salkin on August 8, 2014 · GOSSIP, KAREN'S RANTS

HOW IS WHAT MARLON WAYANS TWEETED OKAY?

In case you haven’t seen this classless act earlier this week, Marlon Wayans (I know–who?) posted something on Instagram that is considered by many to to be offensive. I hate reprinting it, but here goes. It read: “Man I got the most UNRHYTHMIC WHITE WOMAN dancing next to me at the jay and bay concert… this bitch dancing to AC/DC.” [Note: They were at the Beyonce/Jay Z concert.] 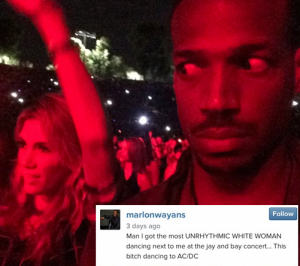 I actually have no big problem with it, per se. He’s a comedian and trying to be funny. My big gripe is that, if it were the other way around, the person posting it would be raked over the coals.

Picture it: if a white man had maligned a black chick, and called her a “bitch,” to boot, do you think the press would have just let it go??? No f**kin’ way! He would be instantly fired from whatever gig he had, and would be an immediate pariah in the business!

Look what happened to Donald Sterling. Yes, he is disgusting, in so many ways. But he was having a private conversation with his girlfriend, or whatever the heck that weirdo relationship was, when he ragged on black people. His words and sentiments should have never come to light. What you say in private to someone you’re having sex with, in the heat of the moment, is not the public’s business. But I understand that we can’t help but judge him for it. And he did dig a bigger hole for himself with his inane television interviews after the fact.

But, to me, what Marlon Wayans did is much worse. He unabashedly put his racist remarks out there, for all to see. He’s proud to call a white woman a bitch! And, on top of that, she’s famous herself! Perhaps even moreso that this dude who may have not even made it in the biz without being part of a famous comedy family. (The girl is Delta Goodrem, a very popular Australian singer and actress, and coach on her country’s version of The Voice. And when was the last time you worked, Marlon?) 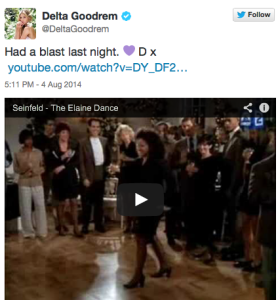 Delta couldn’t have handled this rudeness any better. In response, she put out a tweet stating, “Had a blast last night,” and linked to a youtube clip of the famous awful “Elaine dance” from Seinfeld. Brilliant!

So, I guess this mean-spirited-ness from the Wayans *&#% (if I were Marlon, that would be a real word, and not a good one) will be allowed to just fade away. But keep an eye out for if a white person ever does anything like it. I guarantee there will be a major fuss made over it, with an immediate apology demanded of him from civil rights groups. I guess white people don’t have any of those looking out for them. Shame.

[Note: Since I was born, I’ve always been for equality. I can’t understand any other way. But equality goes all ways. So, if one group of people are allowed to say things like Wayans did, then all groups should be, too, which we all know is not the way it works nowadays. That’s the shame.]