I can’t believe that in this time of so much world chaos, the biggest story this week is Renee Zellwegger’s new looks! I wasn’t even planning to weigh-in on the situation myself, because I think we all know that it’s a simple case of plastic eye surgery, but she lied about it, and I hate liars. Especially about something that we can all see for ourselves, and that’s no big deal, to boot! 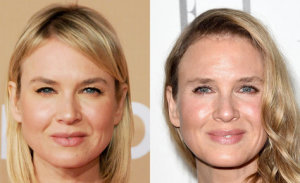 This the famous comparison photo that’s making the rounds. Cover her eyes, and then isolate them, and you’ll see they’re what’s different about her face.

I don’t care if someone has plastic surgery. It’s up to them how they want to age. And more power to them if they care enough, and are brave enough, to try to improve their looks. [Note #1: Surgery is always a crapshoot. If I got a nose job, just my luck that it would come out looking like Latoya Jackson’s awful one instead of the perfect, non-nose-job-y-looking one that Ariana Grande was lucky enough to receive!]

But, please don’t lie to us, especially if you’re in the public eye. What is the point of making believe it didn’t happen? I don’t get that at all.

Renee Zellweger had her eyelids done. Period. Just admit it! Who cares?

Her eyes went from being the squintiest orbs in history to having almost normal-looking eyelid space. Does she think we’re idiots who don’t notice?!

As a person who has a lot of eyelid space myself, (although no one has ever had more than Cher,) I never understood how Renee was able to see okay enough out of those eye-slits of hers, with the lids practically drooping over them. So, if she’s too embarrassed to admit to her surgery for vanity’s sake, she could have said the surgery was a medical necessity. I know that insurance companies often allow eye-lifts if the lids start impeding the patient’s vision. [Note #2: Watch—now she’s going to use the excuse I just gave her! Mark my words.]

The weird thing is that, as froggy-looking as she was before, this more open-eyed look has aged her. Plenty.

And somehow the surgery messed-up her eyebrows, too! She could have at least tried to make them better with make-up, tweezing, trimming, shaping, or tinting, before she went out in public, especially with that weird side-swept hair-do really featuring the brows.

Renee Zellweger, with dark glasses, on the day before the controversial other photo, that started the whole disucssion. This is proof that the difference is her eyes only, and not the rest of her face, because she looks the same as always when you can’t see her eyes.

By the way—I know that many others have thought maybe she had other procedures, as well, but I don’t agree. It doesn’t look like Botox to me, because her forward still has lines. And I don’t think it was fillers or a face-lift because her face has always been puffy. I’m pretty sure it’s only the eyes. A lot of people get that weird look when they have their eyes done, but since the flesh under her brows were always lying right on the eyelashes, with no lid-space between brows and lashes, this is really a different look.

What a bunch of bull!!! We don’t care that you had your eyes done! Just stop with the lies. Or, at the very least, just say it’s none of our B.I. business!!! But don’t lie to us! (Do you get the point that I hate lies!)

As a sidebar, some self-righteous media sites are calling people who are writing about this topic, trolls and haters. All people are doing is marveling at how different a person looks now as opposed to before. And then calling bs over this person’s claims that this totally different look happened from a healthier lifestyle! There’s nothing hateful or mean about it. Renee’s a public person and the public is just sayin’. And so am I.