[Note: I went to ten, count them, ten, Oscars Weeks events! Only one was a waste of time, but the other nonet were great, and each was unique. As physically-challenging to me as it all was, it was worth it to have so many wonderful stories to share with you. So, each Oscars Suite and party gets its own column, in the order of my visits to them, (with many of the celebrities being discussed in the next Celeb Sightings one,) because I want you to be able to concentrate on each and every aspect I’m telling you about. I don’t want you to miss even one second of the fun, so please make sure to check all nine days worth of stories to learn about the entirety of the fabulous-ness! This is the second of nine.]

This is one suite I look forward to all year! Amidst all the hectic-ness of Oscars week, this is an oasis of calm. That’s because of all the wonderful beauty services they feature. More on those in a minute.

But first, I must tell you about something special that happened there. The Roger Neal Suites are known for attracting lots of celebrities, of all ages. As fun as that is for most guests, it’s never an attraction for me because at this point in my life, I’ve seen it all. But I was thrilled to meet, as Roger rightly put it, “legendary actress” Margaret O’Brien, who’s as adorable today as when she was a child starring in Meet Me In St. Louis alongside Judy Garland!!! It’s hard to impress Mr. X these days, either, but he was floored when I told him. He just kept saying, “Wow!” So, a big special thanks to Roger for the personal private introduction to the beautiful Miss O’Brien, who could not have been more darling to me, by the way.

Also, a big shout-out to the personnel at the L’Hermitage Hotel, where it was held. They’re always lovely there, but they were especially so to me on the rainy day that I attended the Roger Neal Suite. From the valet parkers to the front desk staff to a wonderful woman named Britt who was extra kind to me when she saw me struggling with my bags. It was all totally appreciated. I guess that’s why they’re a world-class hotel!

So, now to my services at the two-floor event. Most of the sponsors were set-up on the ground-floor lounge, while a few of the others were in an upstairs suite, along with the service cabanas. I was treated to four services and loved them all! (There were a couple more that I didn’t have done, but a girl can’t be gluttonous enough to ask for more.)

First, I had a mini-facial from Sonia Poole of Sunlounge Studio. We chatted and laughed during it and I came out glowing at the end. I can only imagine what wonders she can work with a full one! www.sunloungestudio.com 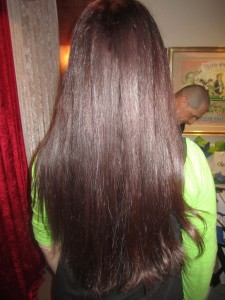 Karen Salkin's hair when Edward Teitel was done with it!

Then I moved over to the service I needed the most–getting my wild wavy natural hair flat-ironed! I swear, many people I talked to when I came in did not recognize me after Edward Teitel, from Olez, worked on my tresses! I think even he was a tad surprised himself. And they gifted us two samples of their professional hair care products, as well. www.olezprofessional.com

Then I had an absolutely new kind of massage from the knowledgable Lara Weithorn of Your MFR Massage. I swear, I got a bonus lesson in anatomy and how it all worked together while receiving a myofascial release massage, which was exactly what my broken back needed. I really did wake-up the next day in less pain than usual, even after carrying the gift bags, if only for a few steps. I recommend her to everyone who suffers like I do. www.mfrbacktherapy.com

And, last, but far from least, a beautiful girl named Brianna Korn, who runs the above-mentioned Sunlounge Spa, did my spray tan. You cannot believe how much better I look tan! And since I know firsthand about the dangers of sunning oneself, I’ll never sit in the sun again. So, with spray tans, I stay gorgeous and healthy! (Well, one out of two ain’t bad, especially when it’s really the latter.)

An always-feature of the Neals’ suites is that they give us giant goodie bags on the way out, so we don’t have to tax ourselves carrying it all around. This way, we VIPS aren’t cranky while we meet the sponsors. Such a great idea. I did go around and talk to them all, just to make sure I had the skinny on all the great products to tell you about.

Here are the highlights of those gifts: 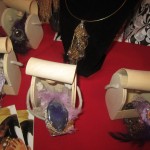 Sisa Designs—I believe Simone Rodrigues Sisa  is primarily a gown designer, but she was gifting big, bold bracelets featuring all kinds of fun accents like stones and feathers. I noticed Renee Taylor eyeing every one of them. I wonder which one she wound-up choosing. www.sisadesigns.com

Renee Taylor’s Face Love—Speaking of Renee, she was not only a celebrity guest at the suite, (along with fabulously funny long-time hubby, Joe Bologna, who makes the best pasta sauce I’ve ever eaten—I hope that he’s a sponsor there next year!!!,) but she was sharing her newly-developed facial serum, designed to reduce fine lines and wrinkles. And it was wrapped up in pink and red, to go along with the title of “Face Love.” Very pretty presentation. www.rtfacelove.com 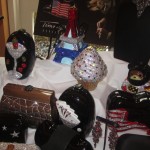 Timmy Woods—I’ve coveted this designer’s stunning jeweled handbags for years, and now I finally own something from her line. It’s not a purse, but a gorgeous cocktail ring. I wore it right away, to the following evening’s happening QVC Oscars bash, and my hands were the the most stylin’ ones there! www.timmywoods.com

Erin Fader Jewelry—this pretty jewelry designer brought many of her attractive designs to show everybody. She was gifting lovely black stud earrings, which will add class to any wearer of them. Even me! www.erinfader.com

Love On The Go—This is a cute set to take with you for a sensual week-end, if you get my drift. All the “romantic” products come in a neat little satin pouch, which doesn’t take-up much room in one’s bag. Just don’t let TSA agents go through it, because they may be tempted to keep it for themselves! www.productsonthegostore.com 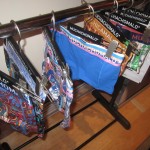 Muchachomalo Underwear—Here’s a secret about me—I love wearing men’s clothing. Not like weirdo males who wear women’s underwear under their suits, but I’ve always thought it was cute; like a boyfriend thing. (I used to have so many articles of clothing from my guy pals, that I called them “scalps!”) So, I was thrilled to see not only underwear that’s really for men, but even cuter boy shorts, for us gals! Knowing me, I’ll wear them both; just, hopefully, not at the same time. www.muchachomalo.com

You know I love when a suite has a charity component, and this one did. It’s Gentle Giants Rescue. I saw that it was about helping dogs to live longer, so, having lost Clarence over two years ago, at almost eighteen of age, I couldn’t really talk to them in depth. I still cry without him. But any organization who does that for others is fine with me! www.gentlegiantsrescue.com