I went to the most private gifting suite I’ve ever been to in my life. This one truly was for only the celebrities; there were no pretenders there, at all. 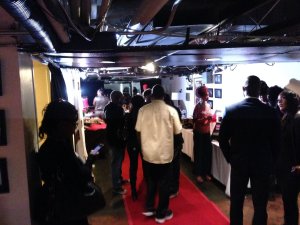 Some of the music biz atmosphere in the suite. Photo by Karen Salkin.

It was to celebrate the next night’s Divas Simply Singing show in Hollywood, which is put on by Sheryl Lee Ralph’s DIVA Foundation. The actress founded the organization in 1990, “as a memorial to the many friends she lost to HIV/AIDS while in the original Broadway company of Dreamgirls,” to “create awareness of, and help combat against, HIV/AIDS.”

This one was held in a really interesting place; I had been to the Sunset Marquis Hotel in West Hollywood plenty of times, (for parties, meals, or just to hang-out in the music biz-heavy bar back in the day,) but I never, ever knew that there was a recording studio in the basement! O-M-G! So, in addition to perusing the gifts themselves, I was thrilled to discover the NightBird Recording Studio; now I’m really in the know! [Note: Don’t try to go down there yourself; it looks to be a “Joe sent me” kind of thing.] 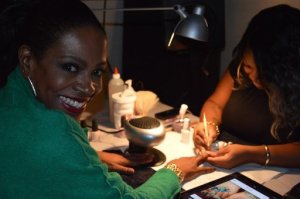 Shery Lee Ralph getting her nails done by Nay Ching of Delicacy Nails. (See mine at the bottom of this story.) Photo by Stephanie Redix for Infinite Scope PR.

After I chatted a bit with Sheryl Lee Ralph, I then suggested to Michelle Williams of Destiny’s Child that she have some lunch. That girl is so thin, in a good way, (which I’m totally jealous of!) (But I told her to have the food because it was delicious, not to fatten her up!)

Speaking of lunch, you know I love a gifting suite that feeds us, and this one had some of the best chow ever! Stephan Johnson of Salt of the Earth Catering did the honors, and I would have been content to just sit there all day, eating his fabulous fare. The hot buffet consisted of Thai steak, lemon-herb grilled chicken, salmon with citrus salsa verde, gourmet green beans, and rice pilaf. And, as if that wasn’t enough, there were rolls, fresh fruit, and a fabulous salad with several different kinds of dressing. And Stephan did perhaps the best move I’ve ever seen at a catered event—he put out a discreet bowl of the good toothpick-floss combos! Brilliant touch! [Note #2: I’m so sorry that I don’t have a pic of the food to show you, but guests were constantly milling around the table when I was there, so I never got to take a photo!]

I was a bit time-constrained that day, so I didn’t get to delve into all the gifts, but here are the highlights: 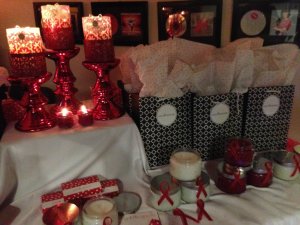 Notice the gold records on the wall, behind the candle display, showing that this is a music studio! Photo by Karen Salkin.

Gold Canyon Candles—These candles smelled as beautiful as they looked! And they come in fragrances that are different from the norm, such as Blueberry-Tangerine and my fave, White Pumpkin! Their glorious aromas wafted through the whole event. www.goldcanyon.com (Enter: “Consultant” as Alicia Miller-Johnson.)

Fannie Lash—These mink eyelashes were designed by Belle, a beautiful woman who also sings, so I’m sure she uses them on-stage herself. They also feature a box with a mirror, so you can apply them any place. All us girls should keep a set in our make-up emergency kits, dontcha think? Fun note: Belle has sung with Miley Cyrus, and stuck-up for her when I mentioned the girl is a mess. How’s that for good show business loyalty?! Nice to hear. www.fannielash.com

P M Gaji Jewelry—The variety of bracelets on this table was mind-boggling! I don’t know how people chose—I wanted them all! They were all beautiful. And varied! The collection included every color imaginable, with all different kinds of stone and jewels. They were a fashionista’s dream! www.pmgaji.com

Milk & Brookies—These combo cookie-brownies were delish! (Some even had cheesecake, too!) I only wish that I had gotten to take more than one because I could have eaten a whole barrel of them! And the mouth-watering display only added to my cravings. www.milkandbrookies.com 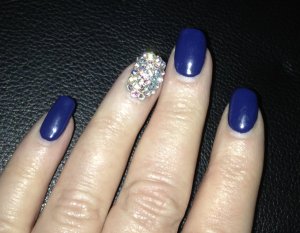 Nay Ching did the blinged-out nail, which looks even a zillion times better in person. And the crystals haven’t moved at all in over a week and a half!!! Photo by Karen Salkin.

But there was a surprise service that was even better than the food, which was hard to beat. It was Nay Ching of Delicacy Nails doing all kinds of nails! I had just had my own gel nails done, so I was lamenting the fact that I did not need a manicure at this event. But then I noticed a nail full of crystals on one of the organizers, and went nuts! I’m all about the bling.

So, I asked her where she had gotten that done, and it turned-out to be right there! So, she introduced me to Nay, (who’s also an artist on not just nails,) and I’ve been waving my new blinged-out nails all over town ever since! (The trick is to get the “jewels” on just one finger on each hand, not all ten.) I found-out that this kind-of design is called “junk” nails. I had never heard that term before. They’re actually quite the opposite of that; what I had done was pretty opulent. [Note: Nay doesn’t have a website, so you’ll have to get in touch with me if you’re interested, and I’ll pass your inquiries on to her.]

So, this first-time (for me, anyway,) suite was a success. Next year I hope to make it out to the actual show!!! With how crazy busy I get this time of year, I better reserve my space, and time, now! And so should you!