This was the best time I’ve ever had at, and around, a suite! The sponsors were great and innovative (I’ve never seen any of them at a suite before!,) but the even better part was the invitee list! This suite was the only one at the official site of the NBA All-Star activities that we in Los Angeles were lucky enough to host this past week-end.

It was held at the relatively new JW Marriott downtown, around the corner from the Staples Center. That area just develops all the time! And quite honestly, with most of my usual activities centering around the west side and Hollywood, I’m rarely in that now-bustling neighborhood. So, it was a treat from start to finish.

The whole experience was so mind-blowing that I must share it in its entirety. But if you can’t wait to learn about all the fabulous gifts the suite featured, just skip ahead. 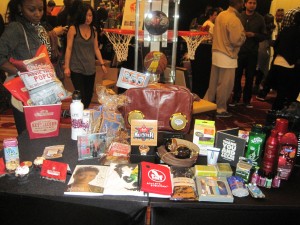 The welcoming table at the suite, displaying some of the fabulous gifts. All photos by Lucia Singer.

The hotel was the center for all of the NBA festivities for the duration, so as we approached the entrance, we were told that we needed credentials just to enter the premises! When I said that we there for the Swag Suite, they ushered us into the lobby, which was lined with a giant table with tons of lists for the different events. We had to check-in with the main person, and they sent us to the section of the table that had the suite list. Because Prezzie Charles, of Urban Elegance Media Group, had been so on top of my invitation from the start, this was the first time ever that I wasn’t worried stepping up to the plate. 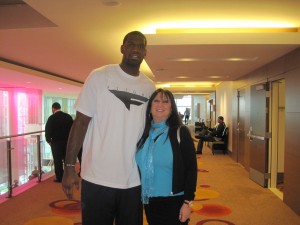 They sent us right up to the third floor, which turned-out to be where all the action was! I can’t tell you how many players I saw walking around up there, but here’s a partial list: current stars LeBron James, Amar’e Stoudmire, Dwayne Wade, Dwight Howard, Ray Allen, Paul Pierce, Dirk Nowitzki, DeMarcus Cousins, Tim Duncan, Kevin Durant, and the super-lovely Greg Oden; retired stars Steve Smith and my old friend (for real) Marques Johnson; and this year’s All-Star coaches, the unassuming Gregg Popovich and another former LA acquaintance of mine, Doc Rivers, who still looks as young as the current players! No lie. Best of all, I ran into Kevin Garnett in the actual suite and got to tell him a short story of when he acknowledged me in New York a few years ago.

Now to the suite itself. It was a cozy, colorful one with interesting gifts and some terrific tastes treats. It was interesting in that it was the first suite I’ve ever been to that was geared towards men! And big ones. Duh! It was for NBA players! And I’m sure they were thrilled to receive these gifts. 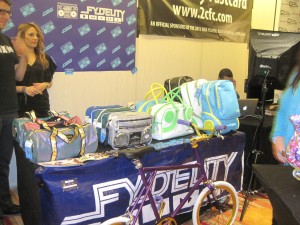 FYDELITY STEREO BAG–the very first items I laid eyes on were these colorful speaker bags. They came in different shapes and sizes (kind-of like my girlfriends, actually,) and each had two speakers that you plug your music source into from the inside. Sort-of like soft boom boxes! Now Mr. X’s krump sessions will never go music-less again! www.highfydelity.com 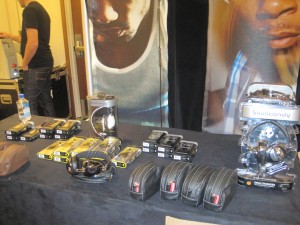 SKULLCANDY HEADPHONES–two days after I received extra-bass headphones from them (for Mr. X, of course–like he needs more excuses to not listen to me!,) they sent Charles Barkley some for his birthday, on-air. I felt so famous to have just met the same Skullcandy guys as he did! Six degrees, baby, six degrees. www.skullcandy.com 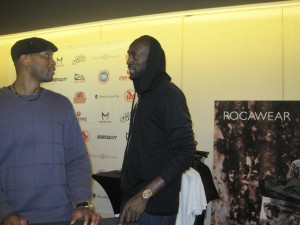 The Celtics' Kevin Garnett blocking the Roca Wear tee-shirt I got Mr. X.

ROCA WEAR–this was hysterical–this hip clothing line, founded by Jay-Z, was gifting fun tees and men’s shorts. The girl kindly offered me some for Mr. X and asked me what size waist he wears. When I said, “34,” she apologetically told me they start at 36! Of course–this was a suite for giant basketball players!!! I either have to find a normal-man-sized suite or a bigger boyfriend! He went nuts for the crazy krump-style tee-shirt, though. www.rocawear.com

MOC SOCS–thankfully, I’m not that familiar with men’s feet. (I try to avoid looking at them even when they’re exposed in the summer.) But I’ve been told these half socks are an innovation for men who like to look like they’re not wearing socks, but want the sweat protection of them. They’re actually pretty attractive, so I’d be happy if they were whole socks! www.mocsocs.com

SKIN ESSENCE–finally, something for the ladies. We actually did get our fair share at this male-centric suite, but we were happy to see these cute goodie-filled bags that we felt were geared towards us. Men should, and do, take care of their skin sometimes, but we girls do it religiously, so we’ll be heading over to one of their salons for a facial real soon. www.skinessence.net

I missed a couple of the big ticket items, such as watches and a men’s shopping spree, but we enjoyed the tables of smaller items to choose from, including body washes and shampoos, Shea Moisture shaving supplies, and Ginger + Liz nail polishes.

We also got to take nutty pictures of ourselves in the portable booth provided by Ultra Booth, and have tee shirts live-screened with basketballs and nets courtesy of Family Industries. 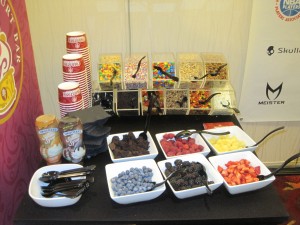 The snacks were as fun as those at a kid’s birthday party–there was a candy bar, a Popcorn Indiana tasting table, delicious cupcakes by My Sweet Cupcake, and, best of all, Cold Stone Creamery’s new frozen yogurt with all the trimmings.

All that sugar gave me the energy to sit in the kind-of private lobby on the Players Plaza (one couch and two chairs,) where all the players had to pass-by, and marvel at all that talent in one place. I honestly can’t thank Urban Elegance Media Group enough for inviting me to be a part of All-Star Week-End.