I had all this to say by Sunday, but needed some time to calm myself down, or else this whole column would have looked like this:  *&%^$#* 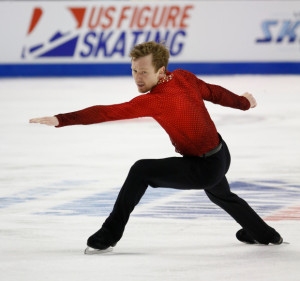 Ross Miner, whose misfortune inspred me to write this entire rant. Pictured at the top of this page are the 2018 Men’s medalists. (L-R) Siver medalist Ross Miner, Champion Nathan Chen, Bronze medalist Vincent Zhou, and Pewter medalist, (yes, that IS a thing!,) Adam Rippon.

Because I’m the busiest girl in the world, I’m a bit behind in watching all of the US Figure Skating Nationals that took place last week.  But I did see every second of the Men’s and Ladies competitions. And there was controversy in both of them. [Note: I had to look this up because I thought I had it wrong—the competitions are listed as “Men’s” and “Ladies,” which are inconsistent. “Men’s” is possessive while “Ladies” is just a plural! How has no one in sports fixed this before??? But I’ll just have to go with it…for now.]

But what happened on Sunday, the day after the Men’s, is so disgusting that I almost can’t even spit it out.

This is an Olympic year, so the results are more important than in the previous three years.  For those of you who are not familiar with how this sport works, here’s a super-short primer:

In most of the past years, throughout history, the skaters who place as the top three, in all four disciplines, are the ones who get to compete at the World Championships that year and, more importantly, the Olympics.  [Note: Sometimes, it’s only the top two, or, in horrible cases, as with this year’s Pairs, only one team who gets to go. But three is the most from any one country.] 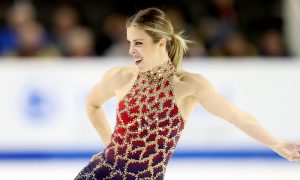 Some other countries decide who get to go not by who are the top three at their country’s Nationals; instead, a committee looks at their body of work.  That way, if their real top skater screws-up at this one competition, he or she is not penalized for it.  But America has always made it the top three, except in cases of temporary injury.

That all changed four years ago when the United States Figure Skating Association wanted fourth place Ashley Wagner to go to the Olympics, feeling that she’d have the best chance to wind-up on that podium, which is all they care about.  Medaling on the world stage is much more important to the committee than individuals’ feelings or fairness. 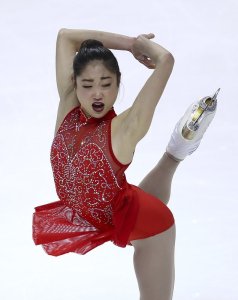 It’s always been a shame to me that one competition can crush a person. But conversely, it can make someone’s life complete.  It’s up to each competitor to do his or her best.

So background over, and now the saga begins. Four years ago, in 2014, (the previous Olympics year,) semi-newcomer Gracie Gold won the Nationals, and the powers-that-be loved her, so of course she was chosen.  Ashley Wagner, who had been expected to win, fell to fourth.  My favorite current skater, Mirai Nagasu, (who has been competing on the senior level for a decade now, and who always seems to be expected to fail,) did great, but not great enough, because she wound-up in third place, with super-young newbie, Polina Edmonds, as the surprise silver medalist.  So, that’s the trio who should have been appointed to the three-skater Ladies Olympic team. 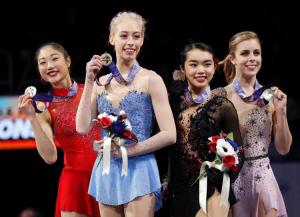 But no—they really wanted Ashley on there!  Mirai had come in fourth at the previous Olympics, at just fifteen years of age, so she should have been rewarded with a berth this time, especially since she earned it in the Nationals!  They could not replace the Champion, so, if it had to be anybody who was left off the team for Ashley, it should have been inexperienced Polina.  But they wanted the young ‘un to gain the experience for the future, and it really would not have been right to kick the second place finisher down, anyway, so it was lovely Mirai who was sacrificed for Ashley.  It was a truly horrible, painful time for Mirai.

But she hung-in there for this entire Olympics cycle, and won the silver medal this year, while Ashley, once again, came in fourth.  Thank goodness they didn’t screw Mirai again, or there would have been a revolt by all American skating fans.  So, they did the right thing, and the Ladies results stayed the way they were, with the top three going to the Olympics.  I’m really so happy for this totally deserving trio. (Last year’s Champ, Karen Chen, is the third place girl.) 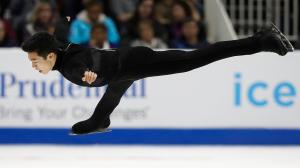 I told you all that as a prelude to the horror show that was the Mens competition this year.  So, we have the incredible Nathan Chen, who would have won his Olympics spot even if he had pulled-out of the Nationals—he’s that good.  But, even with a cold, which forced him to water-down his programs, he blew everyone away, and just may be the favorite to win Olympic Gold.

But the rest of the competition was a mess.  Very young Vincent Zhou was expected to come in second, with two former National Champions, senior citizen Adam Rippon and crowd favorite Jason Brown, duking it out for third.  But that’s not even close to what happened. 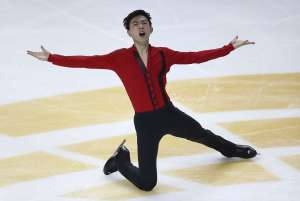 Vincent was fifth in the short program, but pulled-up to third in the long program, due to his many triple jumps combined with less-than-stellar performances by the other guys.  Adam and Jason fell on the ice multiple times each, and “popped” jumps, (which means they did singles or doubles rather than planned triples,) and fell to fourth and fifth places, respectively. 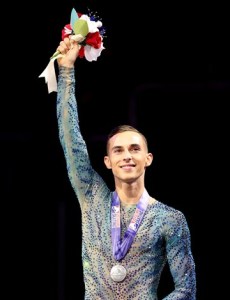 Jason had been to the Olympics before, and he’s still young, and has no quad jumps, so he’s not a contender on the world scene, anyway.  But, at twenty-eight, this is basically Adam’s last chance.  He’s a gorgeous skater, who’s very confident, (bordering on cocky this year,) so it was sad and shocking to witness his problem-plagued program.  In all his pre-competition interviews, he made it quite clear that he was expecting to be on the Olympics team.  (He went so far as to say that the only way he would not make the team is if the other skater’s “mothers are on the selection committee.”  But that isn’t really as obnoxious as it sounds; it’s just Adam.) [Sidebar: He cracked me up when he tweeted that being a gay athlete in sports is “exactly like being a straight athlete. Lots of hard work but usually done with better eyebrows.”] 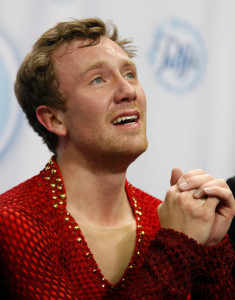 But the shock of all shocks is that perennial also-ran, Ross Miner, had the skate of his life!  It was amazing, and he won the silver medal.  Which meant that even if the committee decided to move Adam up, how could they leave the third place finisher, Vincent, on the team, and screw the second place guy, Ross, right?  But guess what?  That’s exactly what they did!!!  How terrible of them!  Ross earned his spot, yet was totally screwed!

And adding insult to injury is this—they didn’t even make Ross the first alternate (which means he’d get a trip to the Olympics if one of the top three drop-out.) They gave that spot to Jason!!!  That means that two of the top three would have to drop-out for Ross to get to go.  That is just unconscionable of them to do to someone who’s put his heart and soul into skating for all these years, and had the second best performance of the competition! What do these athletes work for their whole lives if their accomplishments wind-up meaning nothing to these decision-makers??? I’m so outraged that my head is pounding just writing this! [Note: Jason Brown is lovely and kind and totally beloved by all who know him. But this is a professional skating competiton–his goodness as a person should have no bearing on his selection or not. Although he does have the most gorgeous posture I’ve ever seen!] 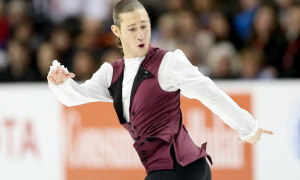 Of course they want Vincent to be the one to go to the Olympics, because they want the seventeen-year-old to gain experience for the next Olympics, just as with Polina Edmonds four years ago.  (Yeah, look how well that worked out!)  But fair is fair.  He’s who should have been scrapped for Adam, not Ross.  And, at the very least, Ross should be the first alternate, not Jason.  My heart just breaks for the poor guy.

By the way, I love Adam Rippon’s skating, and I feel he has not been marked high enough in the past.  So I’m thrilled that he’s getting to finally live his Olympic dream.  I’m just saying he should have replaced third place Vincent, not second place Ross.

I still wish them all the best in Pyeongchang, Korea next month.  And I hope that Mirai Nagasu and Nathan Chen come out of there as new Olympics Champions.  But I also hope that the selection committee gets no sleep ever again for the wrong they’ve done to Ross Miner.  I’m just saying.