Trending
You are at:Home»FASHION»FASHION/PARTY: FOR THE STARS FASHION HOUSE GRAND OPENING
By Karen Salkin on October 24, 2013 · FASHION, PARTIES

The grand opening of this fashion boutique on Melrose very aptly coincided with the end of LA Fashion Week. I brought a friend who’s a veteran of fashion shows, having worked at the California Mart for many years, and she admiringly said, “There was definitely a fashion show, it just wasn’t on the stage.” 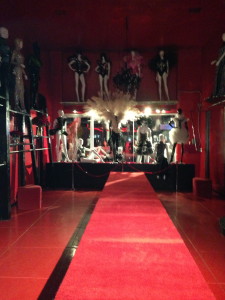 We had the perfect seats in the middle room between the indoor bar/runway space and the multiple-barred patio in the back, so we got to see the constant parade of fashionistas throughout the night. What impressed me most was that just about everyone knew enough to dress up; the styles ran the gamut from boho chic to Nicki Minaj-esque wildness to preppy hipster to cocktail dresses and black tie gowns. And it was all fabulous, dah-ling!

The whole night was a super-fun event. Everywhere you looked there was something going on. Even on the way in, there were girls in some of the wildest creations I’ve ever seen, posing all night on the red carpet. What a great idea!

Once inside, you had your choice of open bars, including a tiki hut in the back, and one with a Miley Cyrus look-alike on top, working a pole in her underwear all night. I’m sorry that Mr. X missed that one! Not. 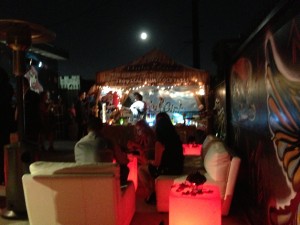 You know that I’m always partial to a party that feeds me, and even though this one had no real sustenance, they did have girls in little French maid outfits walking around all night with different desserts. We had to leave to go to dinner, so we didn’t get to try everything, but we were happy to have mini red velvet cupcakes and some new meringue confections that will be featured in their own store in Beverly Hills by the end of the year. (I’ll tell you about that when it opens.)

The fact that there was a long, raised, red runway in one of the front rooms led me to believe that perhaps there was an actual fashion show later on in the evening, but we had to leave after the first two hours, so we missed whatever came next. 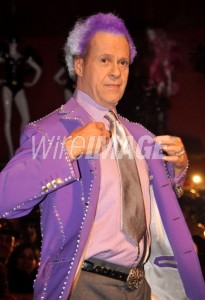 But on the way out, I was thrilled to see exercise guru Richard Simmons, who was actually dressed in real clothing! I had never seen him out of exercise gear before! He was all in lavender, and looked the best he had in years. I actually felt bad that it was too crowded for me to get over to say hello to him because we used to know each other back in the day, when he always told me he was a fan of my show, Karen’s Restaurant Revue. One of my fond memories of those times is when he requested me for a bit he was doing on a national telethon, and I was thrilled to oblige.

Richard led a bunch of us young TV “starlets” in an exercise routine, choreographed to music of a tap dance. It was hilarious. I had on a leotard and tights, but the wardrobe people had neglected to inform me of the need for a heavy-duty sports bra. I doubt that anyone watching that day saw anything other than my bouncing boobs. I cringe when I think of it.

But the best part, to me, (other than that we were helping a charity,) was Richard’s introduction of me. He introduced everyone else just by name, with no special fanfare, but when it came to me, he shouted in his inimitable way, “And now we have the most fabulously LA restaurant critic, Karen Salkin!” I was just shocked he even knew my name! And he was darling to me off-camera, as well, declaring himself to be one of my biggest fans. So I always think of him fondly, and would have loved to get to chat with him at this event. But there was a taco in a restaurant that was calling my name, so we had to leave.

It’s always great to leave an event on a high, and that’s just what we did at this one. I had forgone some other LA Fashion Week events in lieu of this opening of For The Stars Fashion House, and it looks like I made a good choice. Now I just have to return to try on all the gorgeous boots I saw in the front room, and hope some of them come in my crazily small size!