Trending
You are at:Home»EVENTS»FASHION/EVENT: THE FACE OF SPOILED KIDDIE FASHION SHOW
By Karen Salkin on July 30, 2014 · EVENTS, FASHION

I went to an unexpectedly wonderful event last week-end. “Unexpected” only because I had been wondering how fun a children’s fashion show would be, and my erroneous answer to myself was “not very.” But I was wrong—it was great! On so many levels. We could not have had any more fun at this event if we tried. The kids were adorable, the food was fantastic, the entertainment (an awe-inspiring marionettes show) was superb, and on top of all that, everybody was dressed well, which you know I love. 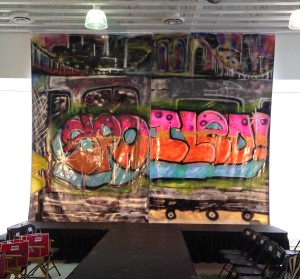 The stage and runway, pre-show. Photo by Karen Salkin.

This is what the day was about: Spoiled is a shopping website that sells high-end (hence the moniker “spoiled,”) children’s clothing on consignment. (Check-out the link at the end of this article.) They were choosing this year’s “face” of the company. Boys and girls were submitted from all over the country, and the finalists were here in L.A. to participate in a fashion show that crowned the winner. Each child got to strut his or her stuff down the runway in two different head-to-toe outfits chosen by organizer (and site head honcho,) Cece Hendriks. (I especially loved all the shoes on the girls.) They must have been in heaven doing it!

But the event was so much more than just a fashion show! First of all, as I alluded to before, the entire assemblage, (children, hosts, guests, judges,) made the afternoon special by being the best-dressed people I’ve seen in a long time. Just about everyone looked great. And appropriate! No jeans and tee-shirt slobs here! No, sir.

And even before the show started, there was a party atmosphere. There were DJs playing great music throughout the entire event, which got the crowd going. (At the beginning, the music was way too loud, even for my hip-hop-clubbing self. But they did get more volume-appropriate once the actual fashion show began, though.) 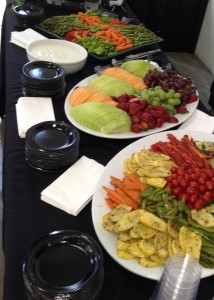 Then there was absolutely delicious food served at just the right intervals. It was catered by Dulan’s, a soul food restaurant here in Los Angeles, and was done in such a perfect way. As the guests arrived and were seated, the amiable staff served beautiful, healthful, classy, colorful, easy-to-eat-at-a-party fruits and vegetables, and they did that again at the break after the first set of fashions were presented, just as all of our energy was beginning to wane. And then when the entire show was over, they busted out the hot dishes: fried chicken, beef brisket, collard greens, corn muffins, rice and beans, and best of all, mac & cheese! Yum-my! (I’ll try to do a full review of their restaurant before the end of the year, because if these few dishes were any indication, all the fare there will be fabulous.)

Now to the show itself. As a former teen-age model myself, I could really appreciate what was happening from the kids’ perspective. And I must laud them all because they looked pretty calm to me. Their ages appeared to range from about five to thirteen, and they were each well-spoken, well-behaved, intelligent, and adorable. And, most impressive of all, they had excellent reading skills! (I know about the reading and well-spoken-ness because they each read and answered a question in the second half of the show, which proved to be the most fun part.) 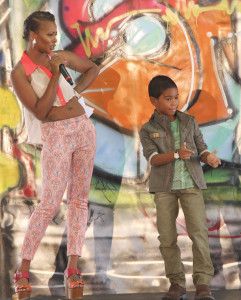 Gorgoeus hostess, Eva Marcille, with the boy model who had the most personality! (He so reminded me of my favorite young pal, Ronnie Hazel, Jr.) His answer to where he’d most like to visit was “Vegas,” because there are “so many opportunities there!” What a riot!

There were two hosts, who did an admirable job of keeping the action going. The co-host, Princeton, is a young guy from a boy band called Mindless Behavior, and the main host is the most gorgeous female I’ve ever seen in my entire life, Eva Marcille. I had seen her only once before, as a guest sitting across from me at a fashion show last year, (which, of course, made me feel inadequate,) and I didn’t know anything about her. But when I asked the PR guy from this Spoiled event where they found such a beautiful girl to be the hostess, he told me that she was the winner of season three of America’s Next Top Model! You all know that I don’t watch reality shows, (I even had to just look up that exact title!,) so I had no idea, but I could totally see why she won. And she was a likable hostess, as well. She was really kind to the children, and made each one feel comfortable and special. Since I’ve hosted a lot of these types of events myself, I always see flaws in what other hosts and hostesses are doing, but I had no complaints about Eva whatsoever. She really kept the action moving. You go, girl! 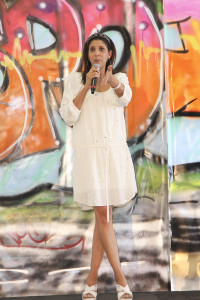 There was a panel of industry judges, the most famous one being L.A. newswoman Christine Devine. I’ve actually had lunch with her a couple of times at an annual event that benefits her Wednesday’s Child organization, (which helps find “forever families for children in foster care,”) and she’s lovely. I’m glad that she had the opportunity to go up on stage to tell us all a little bit about it. But the most enthusiastic judge, by far, was Twinkie Byrd, a big-time casting director.  She was always smiling and dancing in her seat and having a good ol’ time.  (I only hope that she’s just as enthusiastic if I ever get to read for her!  Fingers crossed.)

But my favorite part of the entire day, (yes, even more than the fabulous food!,) was a mid-show performance by the Bob Baker Marionettes.  It was unbelievably charming!  You really can’t imagine that inanimate objects could be that animated!  And there was such a variety of characters, and their “talents!”  There was a skating bear, a flirty cat, a tango dancing couple, and even a woman whose hair grew in front of our eyes!  In all, there were over half a dozen different marionettes.  It was fascinating.  And the best part was the joy on everyone’s faces, young, old, and in-between, as they witnessed this magical presentation. Big props got to the puppet-master (I don’t know the real technical term for the person who works them,) Eric De La Cruz, who was stupendous!  I was so impressed with the guy, especially when I chatted with him after his performance; he told me of his love for this line of work, that Bob Baker himself had taught Eric.  His face was aglow just talking about the art! 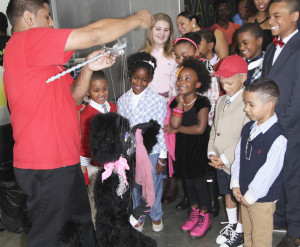 Eric De La Cruz, showing his Bob Baker Marionettes to the children, up-close and personal. Look at the joy on their little faces! The little girl with the pink sweater (that she held steady on that shoulder all day,) was the eventual winner of the Face of Spoiled competition.

The only slight drawback of the whole day was that the show got a tiny bit disorganized near the end, while we were waiting for the votes to be tabulated, but I have a feeling that part will be cleared-up next year. I suggested that they have a young dance troupe, or the like, entertain us during that procedure. Maybe we can talk krump-dancing Mr. X and his crew into doing a demonstration. I’d love to see the kids’ faces watching that bit! That just might make their faces be “Spoiled” for awhile after!

A big thanks and congrats to everyone who participated in the day. We attendees were all the winners at this one!

For more info, and to buy or sell on the site, go to www.spoiledfashionz.com