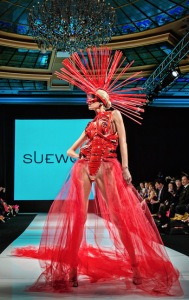 Photo by Sam Fu, while the big one at the top is by Derrick Rodgers.

Having been a model for many years when I was younger, I’ve always looked forward to Fashion Week, both here and in my native New York.  But, in very recent years, because of so many other time commitments, I’ve had to pare down my participation in most of the festivities.  The one show I will never miss, however, is that of Sue Wong.  Her offerings are always gorgeous and dramatic, and her after-parties are among the best I’ve ever attended.  She continued those traditions with her latest Spring Collection.

I was thrilled to see that the majority of the guests knew enough to dress-up for the occasion, even many in gowns, which you rarely see in laid-back Los Angeles.

The show was held once again in my least favorite venue, the Taglyan Complex in Hollywood, but at least this go-round, it was much easier to negotiate around the interior, especially the always-overcrowded lobby. 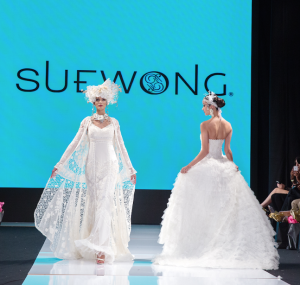 The rain that night curtailed the pre-show cocktail scene, but not the guests’ enthusiasm.  In addition to the full no-host bar, there was a table making fresh coffees and teas in thin, easy-to-carry-into-the-auditorium cylinders, and bins of bottles of cold coffee drinks and flavored waters.

Now to the actual designs on this runway.  Sue Wong outdid herself with this one.  The whole affair was more elaborate than ever.  I don’t know how she finds the time to come up with all these exotic creations, especially amidst all the soirees she’s famous for throwing!

The collection was grouped in colors, as usual, which I always appreciate.  I swear, there wasn’t one gown or dress I wasn’t a fan of, but I especially loved the silver group.

As usual, the were plenty of extravagant headdresses, and, to go along with the theme of Alchemy and Masquerade, they added masks this time, as well. 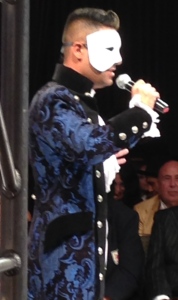 Several of us who regularly cover fashion appreciated the interesting touch of having a few older models this time. I liked that, and think that perhaps they carried-off Sue’s classic designs better than some of the younger ones. Kudos to Sue for choosing them!

But my favorite model at this show was one of the young ones, a girl with wild, very curly red hair, which went perfectly with the outfits.  I can’t believe those tresses looked so good on her;  I look like Monica in the Bahamas with my locks like that!

Right before the Finale, when all the girls appeared together, in spectacular fashion, a singer named Michael Peer serenaded the crowd with Phantom of the Opera, which was spot-on with the theme. 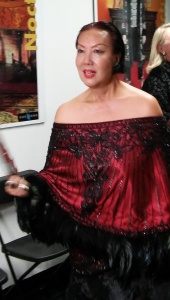 But the rest of the music that night was brutal.  Sue Wong’s designs are way too classy and elegant to be accompanied by that horrible pounding music.  I know it’s de rigueur for modern-day fashion shows, but Sue’s collections are above that trend. Maybe next time, they’ll choose strains worthy of her creations.

But noise aside, Sue Wong’s Spring Collection was quite the success. And an excellent time was had by the appreciative standing-room-only crowd.

To celebrate her triumphant show, Sue threw her usual unbelievably generous after-party. But this time it was at her spacious Atelier near Hancock Park, rather than at her beautiful Los Feliz home. That turned-out to be a great idea–I loved seeing the work space of a design genius! 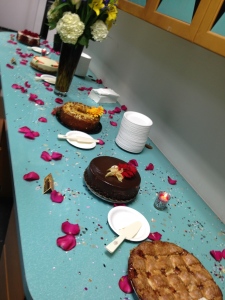 Porto’s did the catering, and there was fare like I’ve rarely seen. There were four or five rooms with different foods, featuring everything from hot pasta and sausages to many creative salads to Cuban pastries (both sweet and savory) to full-on cakes of ever flavor imaginable. And, for the entire duration, servers walked around with trays of sandwiches, potato balls, and ham and cheese croquettes. Lucky for me that my dress wasn’t as tight as some of the gowns on the other guests, so I could eat as much of this delish cuisine as I wanted!

There were also a couple of full bars, a room with special confections from Downey’s Desserts, and even a bowl of her perfume samples. Sue and her staff did not leave a stone unturned.

And now I can’t wait until her next event. Congrats to Sue Wong on all her success!