Trending
You are at:Home»EVENTS»FASHION/EVENT: A DUO OF FASHION WEEK EVENTS
By Karen Salkin on October 16, 2014 · EVENTS, FASHION

A DUO OF FASHION WEEK EVENTS

I realized that recently I haven’t been covering Fashion Week as much as I used to. I have so many other events on my plate! So this year, I made a point of getting to a couple of shows so far.

DAY TO NIGHT AT THE W HOLLYWOOD

This event started-off L.A.’s Fashion Week for me. (Although, truth be told, isn’t every week fashion week for me?!) It was really one of the most fun Fashion Week events ever! 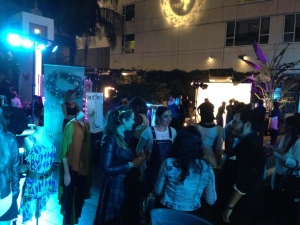 It was held at the W Hollywood, and the way they did the whole affair was very interesting.

To start, guests mingled on the patio, and got to shop some of the lines at an outdoor boutique. There was a bar, and servers passed trays of creamy desserts. (Obviously, the models didn’t have any that night…or ever!!!)

The show itself was inside, in the Living Room, with various areas from which to watch it all unfold; there were couches, chairs, and standing room. There were even a couple of seats on the stage!!! 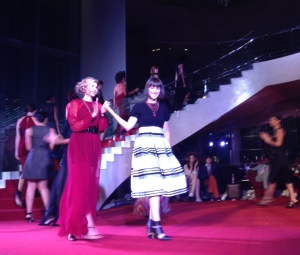 Designer Bri Seeley, on the right, taking her bow at the end of her segment of the show. Photo courtesy of Mannfolk PR.

The models came down the very long, movie-like, spiral staircase, did a quick turn-around, and returned up the steps. I was, of course, worried the whole time that they were going to fall down the stairs in their crazy-high heels! But no one did. (To my relief, and to the dismay of a few audience members who may have been imbibing a bit too much earlier!)

I was there primarily to peruse the line of Bri Seeley, about whom I’ve written in the past. This go-round she was featuring easy-breezy evening wear. I was wishing that I was wearing any one of those designs that night!

There was a really clever touch in-between the presentations. After each designer’s segment of the show, a parade of show personnel descended the stairs, and gave each guest a bag of much-appreciated sustenance supplies! In them was a flavored sparkling water and two kinds of health bars. 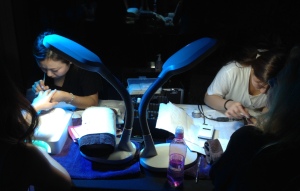 But the best part of the evening, to me, was discovering a duo of nail techs from ES Nail on the patio doing—get ready for this—gel manicures!!! We each waited for well over an hour for our turn, but it was soooo worth it! My manicurist was Misako Matsui, and she was adorable. She’s indeed an artist, and seemed to love what she was doing. I couldn’t take my eyes off her hands performing their painting skills, even though I’ve seen it from others a million times over! My nails came out looking magnificent, which was the perfect ending to the evening. Big props to whosever the brilliant idea this was! 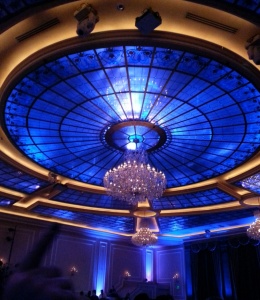 Look at that gorgeous ceiling of the Grand Ballroom in the Taglyan Complex! Photo by Alice Farinas.

This major undertaking was produced in association with Aids Healthcare Foundation, and was held over several nights. Unfortunately, I was otherwise engaged on two of those evenings, but I was happy to make it out there for the first group of Art Hearts Fashion shows on Monday night.

It was held in a fabulous space that was new to me, (even though it’s been there for about six years now!) The garden of the Taglyan Complex in Hollywood looked really happening as we pulled-up to the valet. Once we checked-in, we noticed that the crush of guests inside to get into the Grand Ballroom was just crazy! But its beauty was worth the wait. 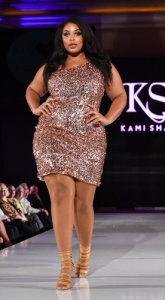 Once everyone was seated, the modeling began. There were eight fashion lines featured in the first half alone! Great “get-the-crowd-into-it” music was played throughout.

The crowd was appreciative all along, but they went wild when the only plus-size model appeared. I was glad to be in such a down-to-earth crowd. Making her runway walk even more special was that, during it, they played All About That Bass, a song about being happy to be big! Nice job all around on that one.

I wish I could have returned the next night for the closer, but alas, I was already spread too thin this week. I hope to get in one or two more events before Fashion Week is over, but, if I don’t, I’m grateful I hit these two really excellent ones!