This year’s edition of the Macy’s Passport Glamorama Fashion Show, subtitled “ART-rageous” and held once again at the venerable Orpheum Theatre in downtown LA, was even better than last year’s show! Last year, I had to get used to the change of venue from a gigantic hangar in Santa Monica, complete with long runway, to a total stage show. But, now that the change wasn’t an issue for me, I could just sit back and admire what everyone’s hard work had brought to fruition. 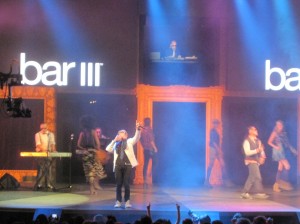 The show had everything–fashion, hip music, wonderful dancing, art, and attitude. And celebs in the audience, such as John Hamm, Jennifer Love Hewitt, and one of my all-time favorite figure skaters, the fashionable Johnny Weir. (You can read more about the celebs in my upcoming Celeb Sightings column.) What more could anyone want in a show??? The answer is…nothing.

The whole event put me in such a good mood that I won’t even report the multiple-series-ed television actress who ducked out in the middle of the show with her male companion. To be fair, a baby sitter emergency is always a big possibility, but there are also so many other reasons, most of them rude. So, I’d rather give her the benefit of the doubt because I can’t imagine anyone wanting to miss even one second of the spectacle. [Note: I just may spill the beans, though, the next Friday that I do my gossip segment on Daytime with Donna, though, so be sure to listen in. I’ll try to remember to tweet the date. @karensalkin] 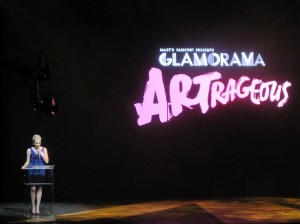 Let’s talk about the most important aspect of the show first—that the proceeds benefit AIDS Project Los Angeles and Project Angel Food, two very worthy causes. For most of the previous years, Dame Elizabeth Taylor put in an appearance, no matter how bad her own health situation was. So, this year, to make her presence still felt, her good pal, and fellow AIDS activist, Sharon Stone, presented a heartfelt tribute to her, along with Taylor’s two grown grandsons. 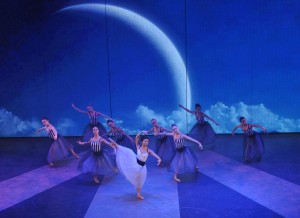 Ballet to open the show. Photo by Getty Images.

The flow of the show was just perfect. It began with a ballet and ended with a rousing performance by Ceelo Green, with the tribute to Elizabeth Taylor and hip music from Far East Movement in the center. And, of course, creative new fashions all the way through. (I had told Johnny Weir pre-show that seeing him again was the highlight of my night. He answered, “I don’t know; guys in underwear are in the show.” I thought he was thinking of last year’s spectacle. But, thankfully, they repeated underwear models. You go, boys!) 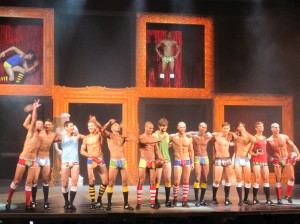 This image is self-explanatory! Photo by Karen Salkin, who had to stop drooling long enough to snap it!

Despite near-naked men, my two favorite parts of the show were Ceelo and the dancers. There’s a little boy dancer, who’s about ten, named Bailey Munoz, who is just fabulous. I’ve seen him on TV a bunch of times, (he’s half of Future Funk from last season’s America’s Got Talent, helped out Serge Ibaka in this year’s slam-dunk contest, and even danced with Chris Brown on Dancing With The Stars,) and seeing him in person was even better. That kid just loves to dance. And he’s great! I spent most of the after-party just watching him on the make-shift dance floor. There’s a lot of pep in that little body and I predict that he’ll become one of the most famous dancers in the years to come. 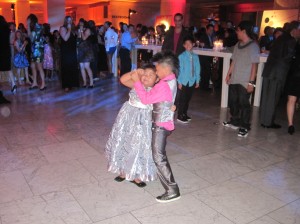 Wonderful dancer Bailey Munoz making a little girl's night with a whirl on the dance floor at the party. Photo by Karen Salkin.

Speaking of the party, it was held once again on the humongous first floor of the California Mart, a short walk from the theatre. It featured catering in Ethnic categories: Mexican, Asian, and American, which was my favorite—mini-brisket sliders and crisp french fries. Yum. Not even the generous See’s Candy Bar could beat that fare!

There was something fun going on at every turn, but I missed a lot of it to watch the dancers. To see talent like that up-close and personal is quite the treat. It was even better than the goodie bags! 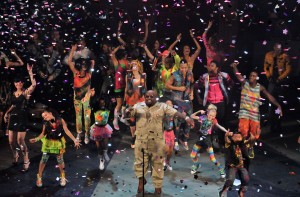 The upbeat finale of the show, starring Ceelo Green.

But the highlight of the whole night came at the very end, when we were approaching our car in the parking lot, après-party. A big van stopped just in front of us, and being an avid watcher of scary TV dramas, like 24, I got a tad frightened, for just a sec. Then who came out of it but Ceelo!!! We couldn’t believe our eyes. He and I chatted for a brief moment about the show and the audience, and I was happy to tell him that he’s the reason I came back from New York after my recent two-month sojourn. A perfect ending to a truly “ART-rageous” evening.

All I can say in conclusion is that you’re a fool if you miss this event next year. I’ve been lamenting that I missed the first twenty-six years of it!!! Let’s all put it on our 2012 calendars now, and I’ll see you there in about twelve months.