Trending
You are at:Home»EVENTS»EVENT/TRAVEL: ISLAND OF IRELAND RECEPTION 2015
By Karen Salkin on December 7, 2015 · EVENTS, TRAVEL

I was happy to paint my fingernails three shades of green, and don a kelly green dress, to attend this year’s Tourism Ireland dinner. Even though they usually switch up how they do it, and at what venue, this year’s fete returned to the classy Beverly Hilton Hotel, in Beverly Hills, (of course,) although it was held in a different area of the hotel than it was last year. 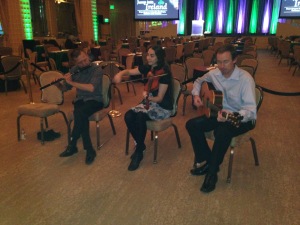 The first part of the evening was the cocktail hour. It featured a generous bar, and passed trays of several attractive appetizers.  Best of all, we got to walk around and chat with the reps of the different areas of Ireland, which my friend, Lauren, took full advantage of.  She and I both hope to visit that country in the near future, and she’s a better planner than I am, so she got the scoop on it all, for both of us.

While Lauren mingled, I got to enjoy the wonderful trio of musicians who entertained us throughout, which was my favorite part of the cocktail hour. They even had a “river-dancer” along for the ride, and every time she got up to dance, she had my total attention. 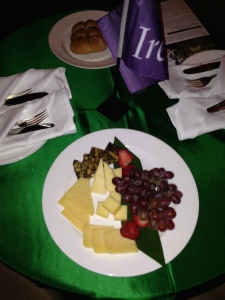 The fare on each table during the presentation. Photo by Karen Salkin.

Then the assemblage moved on to the presentation portion of the festivities.  We sat at tables of four, each adorned with a lovely cheese and fruit platter, along with some Irish soda bread, which tided us over until the dinner.

The presentation included videos and beautiful pictures of Ireland. (The ones of Dublin were especially stunning.) They let us know about all the various areas, resorts, and places of interest the country has to offer. Some of it was very interesting, such as finding-out that the Ireland-headquartered Waterford Crystal are the people who make the exquisite New Year’s Eve ball for Times Square. (I was glad when the man told us, “They release it, not drop it.” That’s important when you’re talking crystal!) I’ve seen many of Tourism Ireland’s past presentations, as well, and I must admit that they could really make it shorter next year; they had us at “Ireland!”

Some of the highlights were: 1) Deborah O’Brien, the rep for The Glenlo Abbey Hotel in Galway, who mentioned the magic words—afternoon tea! If ever I get to the Emerald Isle, you know I’m heading straight for her resort! 2) There was a speaker named Declan O’Brien, which just hit me as the perfect Irish name! 3) One of the presenters mentioned that everyone who visits the country must stay in an Irish castle at least one time. I totally second that! Except that then I may never come back to Los Angeles after that.  4) When they were showing us the many golf courses, they referenced their golf icon, Rory McElroy, just in case we forgot that he’s Irish. 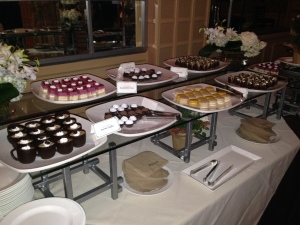 When the presentation ended, we were treated to a delicious, creative buffet. There was something for everyone, even newly-dietary-challenged me!

Lauren enjoyed the sautéed Irish filet of salmon with lemon parsley sauce, and though my mouth was watering for the roasted Irish honey-mustard-marinated corn beef with wild berry sauce, (OMG—what a moniker!,) since I can’t eat it anymore, I was thrilled to see the unusual and lovely assortment of vegetables on offer. There were green peas with mint, glazed carrots with bacon, roasted fingerling potatoes (in two colors,) asparagus with hollandaise sauce, sautéed parsnip with walnuts, and mashed potatoes with kale, which were downright heavenly! 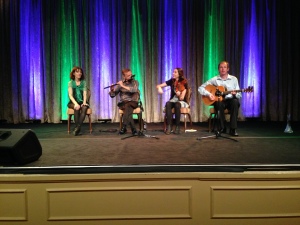 The trio entertained us at the end, as well, but from the stage this time. The woman on the left is the dancer. Photo by Karen Salkin.

We finished the evening with an elegant dessert buffet, which included truffles, petit fours, and a chocolate mint mousse that I thought Lauren was going to marry. (And she is not a dessert girl!) While everyone enjoyed their treats, they raffled off a beautiful Waterford crystal piece, and I’m sad to say I’m not the one who won. But there’s always next year. Knock on wood.

We all still went away happy. After all that Guinness, I think I even saw some guests do an Irish jig out of there!