Trending
You are at:Home»ART»EVENTS: THE WARHOLIAN LAUNCH PARTY
By Karen Salkin on September 24, 2010 · ART, EVENTS, PARTIES

In my recent role as restaurant critic for the Culver City News, I had the opportunity, a couple of years ago, to review Royal T, which is so much more than a tearoom. It’s really an art space and gift shop with interesting edibles. (BTW–I gave them an excellent review, despite the fact that they erroneously call it “high tea,” rather than the correct “afternoon tea,” which is a major pet peeve of mine.) 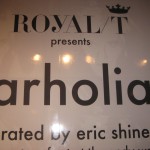 So, as soon I was invited to The Warholian Launch Party, I was there. Shamefully, (since I usually research everything ad nauseam,) most of what I knew about Andy Warhol previous to this reception is that he was big in the Pop Art movement, painted pictures of soup cans, and is still famous for those four-panel portraits that have now popped-up everywhere, including in the opening credits of Karen’s Restaurant Revue when a Brentwood picture shop made one of me as a fan present. 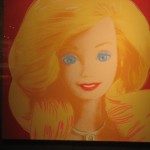 So, besides knowing that Royal T would serve fun food, and the fact that Mr. X had just left town for a few days, the attraction was to see this exhibition of “photos, film, portraits and objects by Andy Warhol and various artists inspired and influenced by his work.” But the party was so packed (in a good way) with guests, many of whom looked like art work themselves, that I barely got a chance to view the walls through the masses. Luckily for all of us, the exhibit will be up for quite awhile. [Note–there was a press preview an hour before the party, but I couldn’t get a handle on the whole event from the busy invitation, so I thought the party was called for three hours later, not one, or else I would have attended the preview, as well, to be able to give you guys more info. I’m really sorry about that, to all of us.] 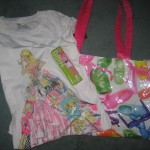 I guess because Andy Warhol had famously done a portrait of Barbie back in the ’80s, our goodie bags were Barbie-themed. (The doll, not a porn woman. Don’t laugh–that’s what I had originally thought when I read the name on the invitation! I told you it was a tad confusing.) As one who still has her originally Barbie, and a couple of newer ones, I was thrilled to receive a Barbie tee and gift card. And they came in a plastic bag adorned with pix of colorful shoes. You could tell that just walking around carrying them put pep in the attendees’ steps. People were even trading Barbie tees. Really fun stuff. 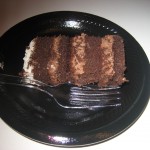 The best chocolate cake ever!!!

And the food was pretty good, too. As always at Royal T, the waitresses were dressed as Japanese maids, the purpose of which I don’t get, but it sure made them easy to spot. They constantly served mini-bites all night, which were an interesting mix of tastes. There were grilled goat cheese triangles, figs with cream, pork on tortilla chips, truffled French fries, red velvet and chocolate cupcakes, and my absolute favorite–the best, lightest, chocolate cake ever!!! No one could have been hungry when they left the soiree.

The best part was that the guest list appeared to be all different folks than the ones I usually see at events, and often wish I didn’t. This group had a happening party vibe, and weren’t pushing others out of the way for a morsel of food, like happens at most of the other functions I attend. And many were attired so creatively that my friend asked me if they were dressed-up for some reason, like an early Halloween. We loved it.

Now if only I had seen more of the art, which was the reason for the bash to begin with, I’d have had the perfect party experience. But next time I’m in Culver City, which is often, you can bet that I’ll be checking it out. And not just for some more of that scrumptious chocolate cake!