I went to an interesting avant-garde dance/film event a week ago. My pal, Diane, was jumping out of her skin over it. It was the opening night of Dance Camera West’s month-long Dance Media Film Festival at REDCAT, which is sort-of the hidden-away step-child of Disney Hall. (It stands for “Roy and Edna Disney/CalArts Theater.”)

What’s interesting about it is that it’s not dance programs, per se. Rather, it’s short films of movement, mostly dance, but not necessarily so. One was of some guys doing parkour, which is basically running around the streets jumping off buildings Crouching Tiger, Hidden Dragon-style. It was one of my faves, actually.

For opening week-end, there were three separate sessions of multiple films, and none were shown twice, so if you had the time (the money was negligible,) you could see all them all. 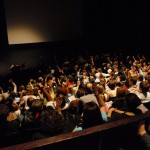 I’m the one in the last row with the (knock on wood) shiny hair and big black ring. Doesn’t it look like I’m patting that’s guy’s bald head? Photo by Barry Michlin.

The audience was interesting, as well. I was excited to see L.A. dance legend, and sometime So You Think You Can Dance judge, Toni Basil, a couple of rows in front of me. We talked a bit at the post-reception, and she is as down to earth as I thought from watching her honest appraisals of the dancers on that Fox show. (And she would know–in addition to all her choreography and directing gigs, she was an original member of the Locker Dancers! And the only girl in the group, too.)

In her pre-screening audience-welcome address , DCW founder, Lynette Kessler, pointed-out the filmmakers who were present, of whom I took note, and when the program was over, and I saw the name of the director of the final film that evening, (and my absolute favorite one,) Mitchell Rose, I realized that he was sitting behind me! In my efforts to congratulate him on Advance, I totally forgot to ask him the questions I had while watching his two person, fifty locations, dance number! There was so much I wanted answered. (The work wasn’t confusing–I just wanted all the production deets because everything about it was so interesting.) 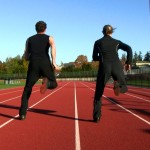 At just two minutes long, Advance was the shortest film, as well as being the best, in my opinion. It was the perfect one to end with, to put the assemblage in a good mood for the casual reception in the lobby. I haven’t seen so many artsy types since I graduated college in the theatre department!

Most of the other works were short enough, and some interesting enough, but the longest one, Circulatura, from Germany, was an interminable twenty-three minutes. I guess that country is still sticking it to us! Mike Myers’ Dieter character (the host of Sprockets, a fictional German television show) from SNL would have loved it! (Actually, I think that Diane did!)

If I had had the time, I would have gone back for the other two programs because dance on film is an interesting niche of the business that we don’t get to see often. There are still three more weeks to go for this worthy festival, so check-out the website for the rest of the happenings.