This year’s recent annual Concern Foundation Block Party was the single most amazing event I’ve been to in ages! Perhaps ever! On every level you can possibly think of. There was not one stone left unturned. And the best part is that one hundred percent of the proceeds go to cancer research. You can’t do better than that. I believe that all the refreshments, services, auction items, and surprises were donated for this spectacular evening. 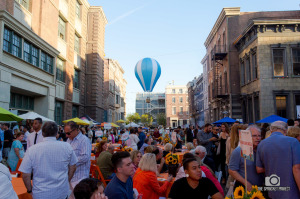 Photo courtesy of The Sprocket Project, as is the big one at the top.

I’m sure that the other four thousand guests, (that’s the real number, and not my hyperbole for once!,) had as wonderful a time as my friend Maria and I did. It just wasn’t possible to do otherwise. For perhaps the first time ever, I’m confidant that I can guarantee that a great time was had by all!

For this very special event, I’m telling you about the important areas of interest first. (No worries, though—I’ll dish the fun parts right after. But please, please, please pay attention to the next few significant paragraphs. I promise that they’ll be worth your while.) 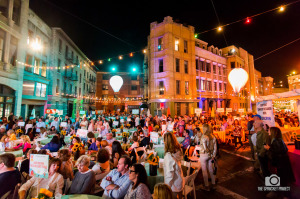 The big group loving the important presentation. Photo courtesy of The Sprocket Project.

Having already been somewhat familiar with this gigantic soiree, I was shocked to learn that this was the forty-second year of its existence! I had attended the Concern Foundation Block Party at Paramount Studios a couple of times way back in the day, when I had just started doing my show, Karen’s Restaurant Revue, and I remember being very impressed by the whole shebang. But what it has grown into absolutely dwarfs what it was back then. And, most importantly, over the years, they have raised over fifty-nine million dollars for cancer research! How wonderful! [Note: So, I believe that this year’s contribution took them over the sixty million mark.] 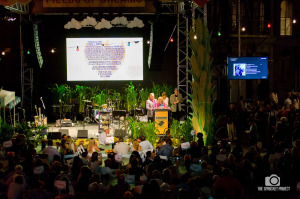 Photo courtesy of The Sprocket Project.

After many hours dedicated to pure partying, (which I’ll get to the details of in a second,) the serious part of the evening began. Those of us who were interested (and awake) enough to pay attention to the presentation got quite the education. (And I’m happy to report that it was a pretty large number of people who were raptly focused on the stage at that time.) The emcee really brought home the sad fact that “everyone has been touched by cancer” by asking the assemblage to raise hands if we personally, or someone we’ve known, has been affected by the dreaded disease. Every single person there had his or her hand in the air. It was a “wow” moment, and, looking at the glass half full, I’m sure made each of us feel less alone in our plights. 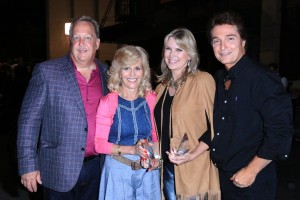 During the speeches, (some by honorees Dr. Peter and Rebecca Grossman, and Barry and Sue Brucker, all uber-kind people,) we learned some good news—that, nowadays, more people successfully live with, and survive, cancer than ever before. It was great to hear that, and to be made aware of all these compassionate Angelenos amongst us.

All that necessary seriousness was followed by a rousing live auction. I’m proud to say that Maria contributed heavily to it, both by donation and by humor provided. She won several of the top items she was coveting, (VIP Barbra Streisand tickets, anyone?,) and also boosted the rest of the other final amounts by continuing the bidding wars with several other guests. The only way it could have been more entertaining is if I had broken out my auction-hosting gavel from my show days, and conducted it myself! But this one was really a lot of fun for everyone, even the people who were just watching it occur, rather than participating. 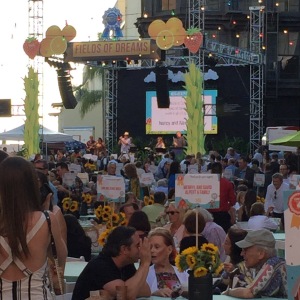 That whole presentation portion of the evening basically closed-out the night, except for the hard-partying peeps (like Maria) who stayed to dance some more at the DJ stage. (I actually had to physically drag her away, but only because I had to get home to start writing this!) On the way out, we each received a cute tee-shirt to commemorate the occasion.

So, let’s backtrack now, to all the party deets. The theme this year was Field of Dreams, For a Cancer-Free World, so it had sort-of a country flavor to the décor. And possibly even to the choice of bands, since one appeared to be playing in a southern gas station setting. (Or something like that.) 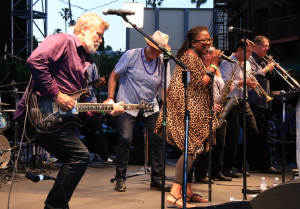 Maria and I arrived at the fete only twenty minutes after it began, and it was already filled-up! It looked like everyone in Los Angeles was on the Paramount backlot! It was a bit overwhelming at first.

There were three separate stages of music, (our favorite performers were the Tom Nolan Band,) a silent auction, (on my suggestion, Maria bid on, and won, a signed Derek Jeter jersey, even though she has absolutely no idea who he is!!!,) a big casino area (which we never got to take part in, even though we would have loved to, but there was just not enough time for us,) and even a beauty services room!

That set-up featured complimentary mini-manis and very many hair stylists. I had come to the event camera-ready, complete with gel nails, so all I opted for was a hand massage from Teresa, a very pleasant student at Colleen O’Hara’s Beauty Academy.

But I think everybody’s favorite part of the evening was the restaurant/caterer-provided food and drinks, which were generously flowing all night. About five dozen local eateries participated, each proffering a few of their most famous tasty tidbits. Being a long-time restaurant critic, I was familiar with most of them, but I was also happy to discover some of the newer ones I haven’t had a chance to review for you yet. [Note: I don’t want to single any of them out here because, since I didn’t have the opportunity to try even half of the offerings, it would not be fair to the ones I didn’t sample.] 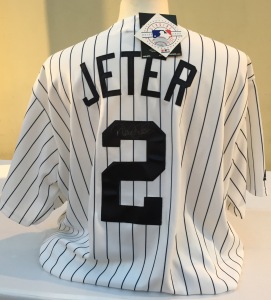 We seriously did not know what to do first when we arrived. I wanted to talk to everybody, and eat, of course, but I also couldn’t wait to explore the massive grounds. And Maria needed to spend an hour or so perusing the silent auction items. And dance! But we worked it out to do as much as we possibly could that night. It was like one of those old “supermarket” shows, where you rush around like a lunatic to get as much as you can grab in the allotted time. Here, we were trying to accomplish as many activities as possible in the four or so hours of the Block Party.

So, now that we’re familiar with the proceedings, we know what to do for next year. And we can’t wait.

For more information, on any of this, or to donate, please go to www.concernfoundation.org.

And, in case you can’t wait another second to learn more about this organization, I feel it’s important to include this official statement from them here: 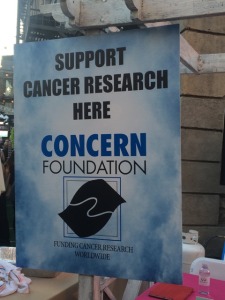 “Concern Foundation’s mission is to conquer cancer by providing essential funds to support the early yet critical stages of discovery. Since its inception in 1968, Concern has raised and awarded $58 million to 750 gifted cancer scientists around the world.

“For 48 years, Concern has pioneered the advancement of cancer immunology—the study of the relationship between the immune system and cancer—a field that is now widely acknowledged to hold the most potential for discovering treatments and preventions for cancer.

“With 90-95% of net proceeds going directly to research, Concern Foundation has made significant strides toward bridging a major gap in research funding by focusing its grants on young, innovative researchers with breakthrough ideas.

“One out of two men and one in three women will be diagnosed with cancer in their lifetime. With cancer expected to surpass heart disease as the leading cause of death in the U.S. by 2030, funding for cancer research has never been more important.”