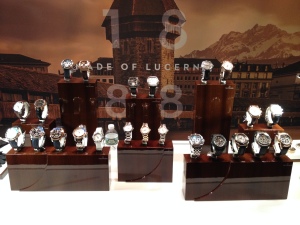 Photo by Sharon Lieberman, as is the big one at the top.

I’ve been watch-obsessed for a long time now. Viewers of my former television show may remember that I used to wear two and three at a time! Watches are so much more than just timepieces; they’ve become important fashion statements over the years. You can actually know a lot about a person by just glancing at his or her watch.

So I’m thrilled that I was in the Big Apple for this year’s WatchTime New York. I’ve actually never seen anything like it! I only feel bad that I missed the inaugural one, in 2015. 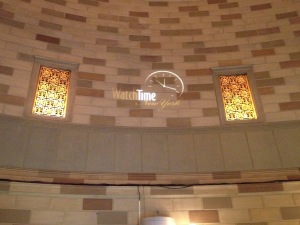 The top of Gotham Hall, with the event logo. Photo by Sharon Lieberman.

WatchTime New York is the largest event that presents luxury watch brands to enthusiasts like myself, including collectors and buyers. It was a two-day event, held at Gotham Hall. My friend Sharon and I attended the Friday night VIP cocktail party; the next day was filled with other more practical events—seminars, panels, and book signings. I, sadly, was otherwise occupied that day, but Sharon and I really enjoyed the cocktail fete and watch exhibition. 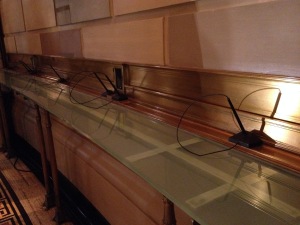 Gotham Hall was the perfect venue for the soiree. It’s one of my favorite locations in New York. For those of you who don’t know about it, it’s an old bank building, with the perimeter of the interior still featuring the old school pen stations. That made my mouth water. And the way this particular exhibition was set-up made each watch brand feel featured without being intruded on by another. It was sort-of a maze, and the new discovery around each corner felt special.

We got to mingle with collectors, buyers, and brand reps alike. There were a couple of bars set-up, and non-stop passed hors d’oeuvres, including mini sliders, short rib quesadillas, and Buffalo chicken and blue cheese wontons. The staff could not have been nicer, including their many inconspicuous (except to me, who, of course, made pals of them) security guards. (The watches were so high-end that I saw armored cars out front!)

And then, since we all needed to garner some extra strength to carry the heaviest goodie bags I’ve ever seen, there was a lavish buffet. And they smartly served it from two sides, so everyone could get back to admiring the watches more quickly. There was butternut squash pasta, which was generously doused with truffle oil; a lovely caprese salad; a medley of thick roasted veggies, including brussels sprouts, carrots, and potatoes; and the pièce de résistance was hand-carved herb-crusted sirloin of beef. The guests were thrilled with such classy fare. 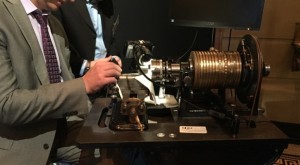 A guest learning a technical watch craft from a company in one of my three favorite states–Rhode Island. Photo by Karen Salkin.

We were all equally thrilled to get up-close and personal views of the glamorous timepieces and accessories. We also got to see a demonstration of quality stitching, and one of what appeared to be metal threading, which guests got to do for themselves! (They were guided by the pros, of course.)

It was a wonderful evening. I really did not expect such a tony event to be that much fun, so I was pleasantly surprised. (I was on my best behavior for nothing—these were sophisticated people, not stuffy ones.) 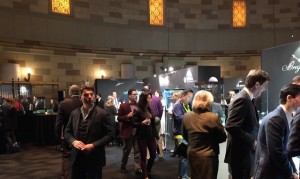 Some of the action. Photo by Karen Salkin.

On our way out, we loved receiving those aforementioned luxurious goodie bags. (But I don’t know how anyone without a near-by car carried them! They were so heavy. I didn’t even have to work-out my arms for the next three days!) Here are just some of the opulent contents: several coveted industry publications, (including that of the host WatchTime,) a stunning leather passport case from Wolf, a beautiful Breguet pen, Swiss chocolate, and my favorite item, from Omega—a little notebook with attached petite one. I wrote these notes right in it, of course!