Trending
You are at:Home»EVENTS»EVENT/FOOD: A TASTE OF DIVINITY FLUFF
By Karen Salkin on November 10, 2015 · EVENTS, FOOD

A TASTE OF DIVINITY FLUFF

Last week, my pal, Carolyn, and I went to Tamara Anderson’s fun, sweet event for her company Sugar & Spyked, at the The Grafton on Sunset.

Tamara Anderson (on the left) with her team. Photo by Sir Jones.

It was to taste-test lots of Sugar & Spyked’s potential “Divinity Fluff” made-from-scratch marshmallows, including gourmet alcohol-infused ones, with fun flavors like Mudslide, Moscow Mule, and Pink Moscato.  But never fear, if you’re like me and don’t like the taste of alcohol–there were also marshmallow flavors that don’t include it, like Grape and Lemon.

As we tasted, we voted for our faves, (by dropping little crystals into a dish beside them,) so Tamara can start making it all up in time for the holidays. The whole event was so well-done! There were long skewers with which to try the pillows of sweetness, so no one’s fingers ever touched the other marshmallows. A germaphobe such as moi really appreciated that. (Tamara is also a nurse, so she knows the value of not passing germs, especially at this time of year.) A really cute touch was having a chocolate fountain alongside it all.  What fun! 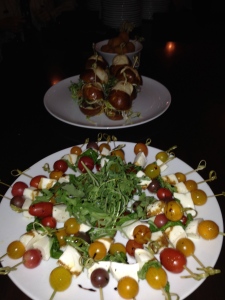 Carolyn’s fave was the Cosmopolitan, which featured white cranberry juice and vodka, and the best part–bits of cranberry in them!  Since I can’t eat sugar anymore, (much, much, much to my dismay!,) I brought a couple of them home to Mr. X to try, so we could weigh-in for the final tally. He chose the Berrie Tequila ones, made with a combo of tequila and blackberry liqueur. (There are other ingredients, of course, but you don’t think I’m going to share Tamara’s secret recipe now, do you?)

Tamara was smart enough to not feed us only sugar all night! We also feasted on hors d’oeuvres from the adjacent restaurant, Oliver’s Prime. Carolyn deemed the short rib sandwich “very tasty,” and explained that she was happy it was served on a “crispy” roll, which is just the way she likes it.  There were also chips and salsa, tuna tartare on little toasts, and chicken skewers, which I loved. 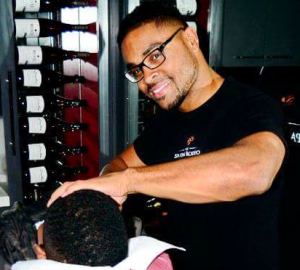 Antone Murray, working on a guest. Photo by Sir Jones.

Some of you may know that I had to recently change my foodie habits, but that doesn’t stop me from admiring and drooling! But I just had to cheat a tiny drop and try the teensiest bite of a rice-and-cheese ball, (but the filling only.)  It was as delish as the chicken! I was really grateful to see some basic mozzarella-and-tiny-tomatoes-combos, because I’m allowed to eat one or two of those.

Since eating can’t be my thing anymore, I was especially thrilled to see Antone Murray of Royal Treatment Pampering Services (www.getroyaltreatmentps.com) setting-up shop there. We each received a mini-massage from him, and it was the highlight of both of our nights! Antoine had moves I had never experienced in a chair massage before.  I think he and I are now engaged!

Seriously, though, he was great. I forgot that I was at a party, and just went with the relaxation.  It was my first non-stressed moments in the past three weeks. 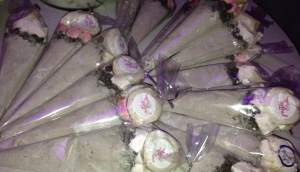 All the guests left with an adorable favor—a triangle bag containing ingredients that caught my eye, but I wasn’t sure what they were, especially all-together in one package. Turns-out, the bottom is cocoa, then chocolate chips to drop into the hot chocolate you make at home with it, and, then on top, what else but little Sugar & Spyked marshmallows!!! How adorbs is that?!

If you’re curious to find-out the marshmallow flavor winners, just go to their website, below. (It will be up fully at the end of the month.) Here’s a hint: I already mentioned one of the winners earlier!

For more info on the marshmallows: www.sugarandspyked.com