Trending
You are at:Home»DINING»EVENT/DINING: MASTERS OF TASTE 2018 PREVIEW
By Karen Salkin on March 14, 2018 · DINING, EVENTS

Last year’s Masters of Taste was so fabulous that I was happy to return to the scene of the crime (Pasadena’s Rose Bowl) for the Media Preview of this year’s foodie fest. The actual main event will be on May 6, 2018, and I highly suggest that all Angeleno restaurant fans be there! The best part is that all of the proceeds go to Union Station Homeless Services. Eating good food while doing a good deed—you can’t get better than that! 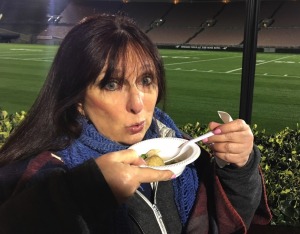 Karen Salkin, enjoying her matzah ball soup from XO. (But she might need a bang trim to go with that!) Photo by Lisa Politz.

Over fifty restaurants/caterers/food purveyors will be participating again; each one shares samples of a few of their most popular dishes, and there’s something for everyone, even moi, the most picky restaurant critic you’ve ever met. The viewers of my former television show, Karen’s Restaurant Revue, used to get such a kick out of my—how shall I put it?—“limited” taste buds.

So I’m happy to report that even at this small-sampling-of-eateries preview, there were several dishes that featured foods on my minimal list of ones I eat! And devour those I did. With gusto!!! 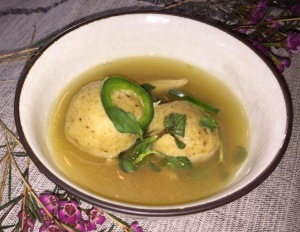 My favorite was a unique one–Vietnamese matzah ball soup!!! Who knew?! New-ish Beverly Boulevard Vietnamese eatery XO surprised me with it. When I asked what it was, (because it appeared to be matzah ball soup, but I knew the place was Asian,) I thought the guy was saying “faux matzah ball soup,” so I was wondering just what it was made with. Was it fake chicken??? But then I realized he was saying “pho,” the famous broth from Vietnam! Boy, was I relieved! And guess what? XO’s matzah balls were almost as good as my little mother’s! (Don’t get alarmed, thinking that I withheld a skill of my little mo’s from you all these years—that was the only thing she could cook! And, as I told Johnny Carson the first time I was on his show—she passed that non-knowledge down to me. Hence, I became a restaurant critic! Thanks, Mom!) 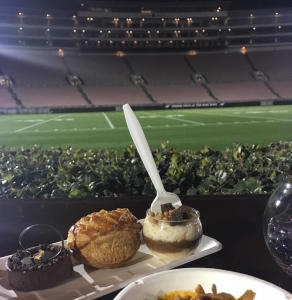 What could be better than a beautiful view of the Rose Bowl field while enjoying desserts from Porto’s? Photo by Lisa Politz.

I also enjoyed the very flavorful asparagus and crunchy quinoa atop burrata cheese from The Bellwether in the Valley, a place I always plan to go for dinner, but never actually get there. So this was a treat.

I brought along my pal, Lisa, and she was a fan of Ayala Luk’s beef khao soi with curry noodles. She deemed it to be “creamy, a little spicy, oh so flavorful, and perfectly delicious!” (I don’t eat beef or curry, so I sat that one out.)

But we were both thrilled to finish-up with a dessert trio from what appears to be everyone’s favorite Burbank bakery, Porto’s. Their fare was so popular that they brought along to-go containers!!! (If only I had known about that, I would have been happy to bring some home to Mr. X. Shame.)

One of the perks of this nighttime preview fete is that we got to take a quick minute on the famous Rose Bowl field! You’ll get to be on it much longer, if you join me there on May 6, for the real Masters of Taste!

Just make sure to come over and say hi to me, and I’ll point you in the direction of all my faves. (If you can catch me between bites, that is!)

For tickets and info, please go to: www.mastersoftastela.com.