After attending this cancer research charity’s incredible fundraising event last year, I could not wait for this year’s presentation. And, if possible, 2017’s rendition of the Concern Foundation Block Party was even better than the previous one! 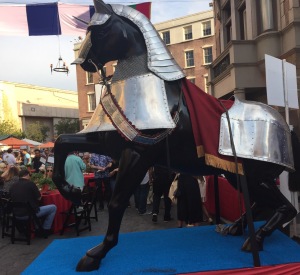 One of the big decorations. Photo by Karen Salkin.

The best part, of course, is that the soiree raised so much money for the cause. But along the way, the thousands, (and I do mean thousands,) of guests were entertained royally.

Speaking of royally, the theme this year was Kingdom of Concern: An Evening of Feasting, Revelry and Dance. That motif was carried through the whole evening, with plenty of wenches strolling along the back lot of Hollywood’s Paramount Pictures Studios, and even a sighting of a knight in armor or two. (I know for a fact that it was real armor because one bumped right into me really hard!)

It’s a testament to the organization and event that everyone showed-up, and stayed, on what has got to be the hottest night of the year! And enjoyed themselves!!! No one wanted to miss this event, trust me. 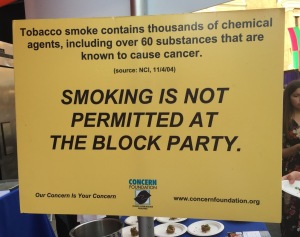 First let me share what the whole evening was like, and then I’ll tell you about the honorees. The first thing that caught my eye on the way in was a sign in giant capital letters that read  “SMOKING IS NOT PERMITTED AT THE BLOCK PARTY.” In smaller writing, it told us that “Tobacco smoke contains thousands of chemical agents, including over 60 substances that are known to cause cancer.” I was so grateful to see signs like that all over the grounds. I’ve been saying that very same thing for many years now to every idiot who still smokes! 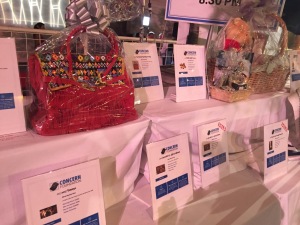 A very small portion of the silent auction items. Photo by Karen Salkin.

Right after we were greeted by members of the “kingdom,” I noticed the plentiful silent auction. There was a dizzying number of items in there; I don’t know how the bidders decided among them!

And, of course, the generous all-night-long food was a major attraction of the Block Party. All in all, there were about seventy-five different restaurants, caterers, and bakeries, all serving their most famous fare for the duration of the event. I laud all the vendors for participating, and feel that they’re so kind to do so! I now want to review them all for you, since you know how much I love kind eatery personnel. On top of that, everything that my friend, Lisa, and I tried was first-rate. And what a variety of items was featured! Some of the highlights were burgers, pizza, hot dogs, sushi, Mexican food, soul food, cookies, cakes, ice cream, and my favorites—believe it or not—several creative salads! 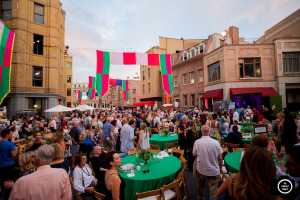 Photo courtesy of The Sprocket Project, as is the big one at the top of this page.

There were all kinds of beverages, as well, but since I don’t drink anything but water, I didn’t check them out. But, speaking of water, I really appreciated that the organizers made sure to have tons of bottles of water at the ready throughout the evening, to keep the guests hydrated in the brutal heat of the night.

There was an indoor area with hair and make-up services, which Lisa and I didn’t need, (because I never want to show up to an event looking like I need work,) but we were more than happy to avail ourselves of the fabulous chair messages on offer. There were also several casino tables, which looked like tons of fun; I wish we had been able to make some time to play. 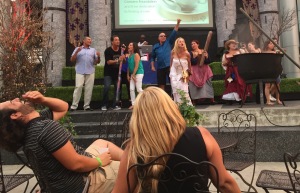 The guy on the bottom left was as entertained by this whole stage “show” as I was! Photo by Karen Salkin.

But we did sit in one of the several music areas for quite awhile. There were other stages with live music, but the one we chose had a DJ and a lively emcee, who—how shall I put it?–”encouraged” the audience into coming onstage to sing and dance. Everyone who joined in had a great time! He couldn’t get the mike out of one woman’s hand for about an hour, she was having such a great time!!! And we were having an equally good time watching her!

Another special activity was taking pictures in the multiple photo booths. I counted at least three of them, as a matter of fact. One of them even put our 3D photos on our choice of a magnet or luggage tag. How clever! 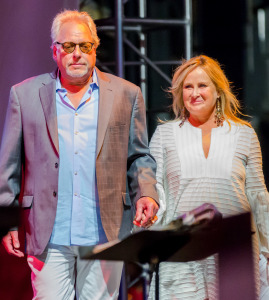 But the most compelling part of the evening was the presentation of the Spirit of Concern Humanitarian Awards to Kelly Stone, Bruce Singer, and Eden Alpert, who’s part owner of the restaurant Vibrato, which I cannot believe I’ve never reviewed for you guys yet! I actually got to meet her dad, the famous trumpeter Herb Alpert, who looked unbelievable! [Note: There will be a picture of him in my next Celeb Sightings column, so you can see that I’m not exaggerating.] He was meeting and greeting everyone around the big stage, like the pro that he is.  This entire group of award recipients is deserving, although that’s not at all why they do what they do. They’re just genuinely good people, which I wish we had more of in this world.

Then came the live auction, which is always entertaining for the Concern Foundation Block Party attendees. It started right off with a bang when Dodger tickets kicked it off, and it went from there. 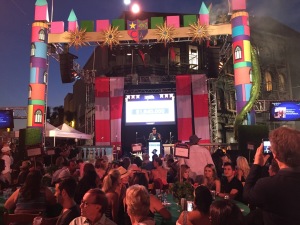 I have to admit that I didn’t stay until the bitter end of this wonderful event this year, as I had last year, because I had to get out of the heat. So, I’m sorry to say that I cut my visit to the Block Party a bit short this go-round, which means that I probably missed one thing or another.

But I’m already looking forward to next year’s version of this fete! But wouldn’t it be great if the Concern Foundation raised so much money this year that a cure for cancer was found before then, meaning that we wouldn’t even need the Block Party?! Except as a celebration! So I still hope to see you all there in 2018!

For more information, on the Concern Foundation, or to donate, please go to www.concernfoundation.org.