As I’m sure you’ve been reading here, I’ve been going to a lot of beauty events this summer, and enjoying them all. But this one from Angeleno Magazine, that was billed as a “beauty party,” was more of a classy party than a pajama one. [Note: Both kinds are fun; I’m just explaining the difference.] 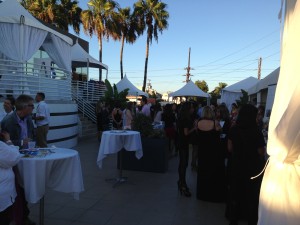 This Poolside Beauty Party was actually a grown-up co-ed fete, with some beauty services set-up in white cabanas around the perimeter. The attendees were a select group of people, not the usual crazies that one finds at events such as this.

It was held at the massive Equinox Sports Club in West L.A. I’m a bit ashamed to say that I haven’t been there since it was Sports Club LA! The action took place on the outdoor terrace, just past the giant indoor pool (where I actually used to do physical therapy!) This time, instead of we re-habbers, it contained…two mermaids! Interesting visual for the party entrance.

My evening started off in a fun way—I got lost on the secret tennis court roof with Angeleno Publisher, Chris Gialanella, and his fabulous wife Andrea; the latter is exactly who I would have been friends with growing up in New York! A less snobby couple I cannot imagine, so that stated me off on a good foot. 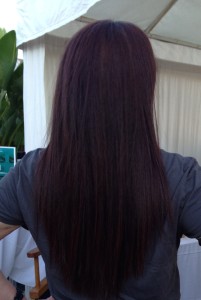 Now let’s see how well you all know me–can you guess what the very first thing I did when I entered the soiree was? Think a second. You all answered, “Headed for the chow,” didn’t you? But guess what? It was the hair cabana! I can’t function correctly until the hair’s working.

And, in this case, it came out great! I had the good fortune of having my tresses flat-ironed by the owner of his eponymous Beverly Hills salon, Englishman James Kendall. As we chatted, we realized that we have a couple of other British blokes in common, including one very famous one! We had such an interesting, upbeat convo about that.

Better than the chat, though, was how excellent my hair looked after sitting in James’ chair. He even did me a huge favor and…cut my errant bangs! It was a relief to be able to finally not have to keep blinking them away.

When I was able to face the rest of the guests, now that my hair was styling, I noticed the salon’s display of attractive nail polishes, from a brand I had never heard of before. Like a moth to a flame, I’m always drawn to nail stuff. It turned-out that it’s a new line, Trust Fund, and they’re the only ones in L.A. who carry it! I can’t wait to try it out. 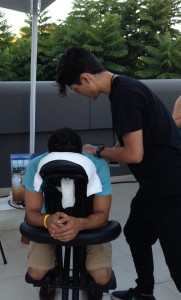 Patricio Salazar working his magic on a guest. Photo by Karen Salkin.

As I was strolling the terrace, waiting my turn to get my eyelashes done, I came upon the one person there I needed more than hair—Equinox masseur, Patricio Salazar. He did a brief chair massage on me, and said he’s rarely felt a back as stressed-out as mine. Duh. That morning, I had done my first treadmill in four years, and I was a mess, so happening upon Patricio was an excellent surprise! He’s a cute kid, too.

Then, at the tail end of the evening, I finally got eyelashes applied by make-up artist Alice Farinas, working with D’Lashes. The ones I chose were D’Sexy Individual Lashes, though the company has tons of styles, including the kind that last a month or so. (But those take hours to apply, so, of course, they weren’t going to do them at a three-hour party. I can’t wait to try them one day soon, though. For next week’s Emmys, perhaps?) 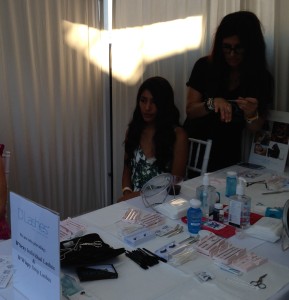 It was almost too dark for lashes applications, even in this early pic. Photo by Karen Salkin.

Something so 2014 Hollywood happened during my application. Of course, it got dark out near the end of the evening, and all the lash artists were virtually working with no light! How bad for their own eyes, and dangerous for ours, as they have to be using delicate tools around our orbs! So, I said we should all use the flashlights on our phones! And that’s just what we did. It felt like being on a girly camping trip! It was hilarious. And practical.

I wouldn’t be Karen if I didn’t tell you about the food at the party. They passed around tasty tiny tidbits, which were easy to eat at a standing-up event like this. Excellent planning! The bites were courtesy of Tender Greens, an eatery I reviewed a few years ago, when I was the restaurant critic for the Culver City News and Blue Pacific News. Even though these were just small samples, they were so good that I’m glad I gave that place a good review! 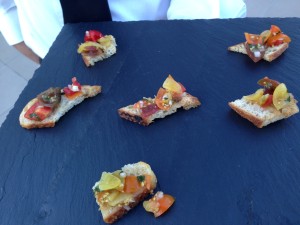 A tray of dainty, colorful bites. I like that they left enough room between them, so that guest’s fingers didn’t touch more than one! Photo by Karen Salkin.

I had such a lovely time at this rooftop event that, I swear, I didn’t even wonder if there would be goodie bags as we exited! And I didn’t notice any, so I was pleasantly surprised when, on the way out of the building, (not the party,) the girl at the check-in desk motioned me over to give me a bag full of product samples, including lash strips from D’Lashes! Usually at these events, you have to fight for your gift bag, so I was extra appreciative that she was keeping an eye out for the people she had checked-in earlier, to make sure we were hooked-up. If she and Chris are representative of the Angeleno personnel, that’s a great company to be a part of! I was just glad to be a part of their summer fete!