As I wrote about this event last year, (which you can read here: itsnotaboutme.tv/news/event-media-access-awards-2012,) the Media Access Awards is the most worthwhile event of the year. I always feel privileged to be included. (This should give you a small clue as to just how worthwhile I deem it to be: it has no goodie bags, or even food that I eat, and I have to wake up at the literal crack of dawn to attend, but there is no way I would miss this one.)

In case you’re not familiar with exactly what the Media Access Awards are all about, this is the official description: They “honor individuals in the entertainment and broadcast industries for their efforts in promoting awareness of the disability experience, accessibility for people with disabilities, and the accurate depiction of characters with disabilities.” 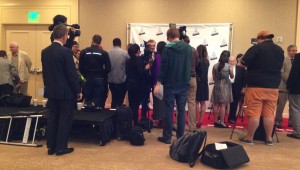 All the same accolades I gave them last year still apply, but each year’s version has its own energy. The entire soiree is upbeat and positive; I’ve never been to any other show business event where no one is grumbling about themselves. Even more interesting this year was that so many people with their own serious disabilities were expressing concern for my heavily bandaged hands! Talk about lovely, caring, compassionate souls; why can’t everybody be like the attendees at this one?! (I did at least try to do my small part for mankind by having my stitched-up left hand bandaged in pink, in honor of Breast Cancer Awareness month.) 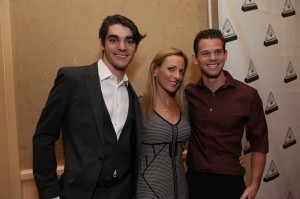 The morning began with a meet and greet with many of the honorees and presenters in a smaller room off the bigger one where the breakfast was about to take place in the Beverly Hilton Hotel. I was happy to chat with many people I haven’t seen for a while, including casting person DeeDee Bradley who was being honored for her work on Switched At Birth. I hadn’t seen her in years, since she cast me on Life Goes On, which I was very proud to be a part of because it was a groundbreaking show whose central character was a teen-age boy with Down Syndrome, played beautifully by Chris Burke. (When DeeDee mentioned in her speech that Life Goes On had “terrific actors,” I obnoxiously uttered a silent “thank you!”) I hadn’t even realized that Switched At Birth is performed half in sign language! How fabulous, especially because, being on ABC Family, it’s a show primarily for teenagers. (Breaking Bad fans will be pleased to learn that its popular actor, RJ Mitte, who was also lauded at the MAAs by his former castmate Anna Gunn, is joining the SAB cast this season.) 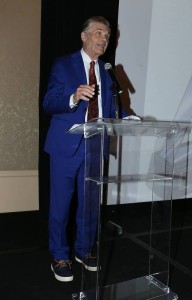 Last year’s host, Jimmy Kimmel, made it hard for anyone to live up to the incredible emcee job he did, but this year’s host, Fred Willard, at least tried. The lesson learned by those of us in attendance who have had multiple hosting gigs, though, is: never follow Jimmy Kimmel.

But the speeches by both the presenters and award recipients were excellent. They all were warm, humorous, and educational, three things that every speech in the world should be!

Here are a few highlights of the proceedings:

David Shore, creator of this show House, (which most of us know is about an arrogant but brilliant doctor with a bum leg,) brought the house down when he said, upon accepting his award, “I’m being honored for showing the world that a person with disabilities can be an asshole.”

Comedienne Geri Jewell seemed to be the hit of the day. (And looked about twenty years younger than she really is! No lie.) Here are her opening lines that brought knowing applause with the first sentience and big guffaws after that: “The more and more visibility, the less and less disability.” “I look out here and I don’t see any disabilities… but Congress? They don’t need an awards show—they need a telethon!” 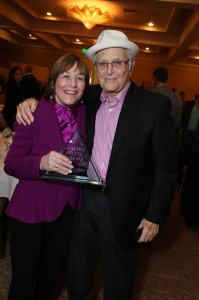 Geri was presenting an award to Norman Lear, and he’s the only person for whom the assemblage stood, deservedly so. (One of my main regrets in show business is that I never got to meet him; his production company called me right after the very first episode of my show, Karen’s Restaurant Revue, telling me they were interested in doing a sitcom for me. I moved through the ranks over there, but stopped short of meeting Norman Lear himself. And of course, like everyone else in show business in those days, nobody in that company could figure out exactly what to do with me anyhow.) Norman did something extra admirable in his speech; he introduced Fern Field, a producer who’s been involved with the Media Access Awards for a very long time, whom several other people mentioned in their speeches that day, but she wasn’t on stage so she hadn’t gotten her proper due. I, at least, was happy to applaud someone so kind, so good onya, Norman Lear!

My favorite speech of the day came from honoree George R. R. Martin, the author of Game of Thrones, which I’ve never read or seen. He said, “When you’re writing a man in a wheelchair, your interest should be the man, not the wheelchair.” He also said that when he began writing smaller parts in scripts, such as “policeman number one,” he realized that the powers-that-be in these shows would just see basic white men for all those roles. So he started putting in descriptions of people who usually wouldn’t be cast, such as “redheaded policewomen,” or “lawyer in wheelchair,” to make casting people think outside the box. I love that! Now I need him to write one that says “formally hot, now a tad chubby, with a prominent nose and waist-length auburn hair, not-as-young-as-she-used-to-be-or-thinks-she-still-is female,” so that I can start acting more! 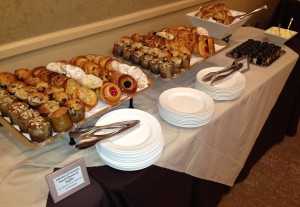 Some of the breakfast fare. Photo by Karen Salkin.

Okay, that’s it for the best parts of the event. But, since it’s been pointed out to me many times that I didn’t even mention the food at last year’s Media Access Awards breakfast, I’ll review that part right now. It’s a really simple affair, but there’s something for everybody. The main dish is, unfortunately for me, scrambled e-words, so I had to deal with watching everybody else eat them, which you know makes me totally nauseous. But people were exclaiming that they were delicious. There was also a variety of beautiful muffins and morning pastries and croissants, along with the most delicious butter ever, and various flavors of jams and marmalades. And let me not forget the gorgeous array of fresh fruit, and several delicious juices. I must thank the Beverly Hilton catering staff for being extra kind to me.

And please check back in the upcoming weeks for my next Celeb Sightings column; it will have all the deets on the many celebs in attendance at this year’s Media Access Awards, so you won’t want to miss it.