Years ago, when I was doing my TV show, Karen’s Restaurant Revue, a group of producers from PBS approached me about hosting an automotive series for them. At first, my agent turned them down because he figured what did a young girly-girl from Brooklyn know about cars? But as soon as I explained to him about my love of them, we took the meeting. We were all set to do the show, but then the station had to cancel, due to finances. (I did mention it was PBS, didn’t I?) I was a tad sad, but my love for cars never waned. 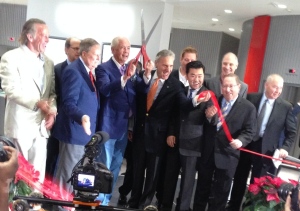 The ribbon-cutting ceremony. Peter Mullin is the triumphant one with the scissors. Photo by Karen Salkin.

So I was extra-thrilled to be included in the private preview event that heralded the re-opening of LA’s Peterson Automotive Museum last week. I’ve been driving by the newly-designed structure for a while now, and knew that if the interior was anywhere near as exciting as the exterior, we’d all be in for a treat.

I had visited the museum on the last day it was open in the fall of 2014, and really couldn’t imagine how they were going to make it better. But that they did.

You can read about the history and exact new exhibits elsewhere, (and I recommend that you do,) but you know that I’m here to tell you the fun stuff! So, here’s the low-down on what this special experience was like, (mostly in order of the day, of course!) 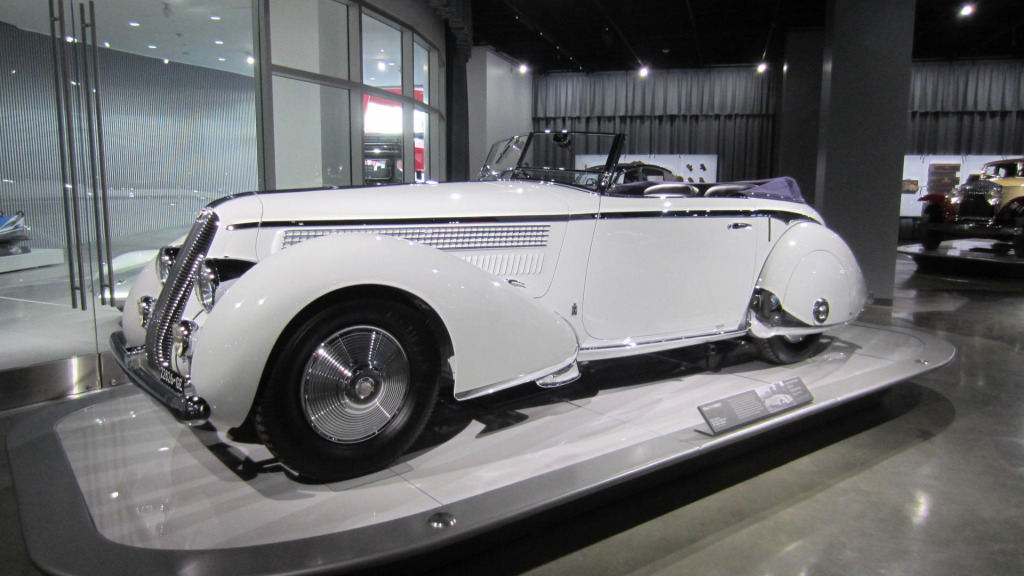 The 1936 Lancia Astura Cabriolet, which inspired my tears. Photo by Celia Yusem.

The event kicked-off with welcoming speeches from several of the powers-that-be. I was most interested to hear Peter Mullin, whose unbelievably stunning, amazing, incredible, spectacular, and every other superlative you can think of, collection of cars, takes up almost the entire first floor. I actually cried when I saw the white 1936 Lancia Astura Cabriolet with a dark purple convertible-top-holder in the back. I absolutely love old cars, (as witnessed by my still driving my 1991 BMW 318I, with an E30 body, and only 65,000 miles, even though it’s not exactly a classic…yet,) and Mr. Mullin’s is the most wonderful “art” collection I’ve ever seen.

After the ribbon-cutting ceremony, we were invited to wander around at our own pace, which my associate, Celia, and I took full advantage of. There were several special events throughout the day, all on the wonderful rooftop Penthouse, in a glass-enclosed conference room in the middle of the area. I’ve been to several events there over the years, and I was happy to see that that part of the commodious edifice didn’t change. 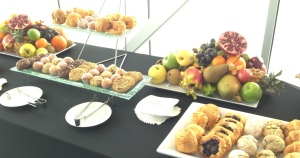 Part of the breakfast buffet. Photo by Karen Salkin.

The quartet of brothers Drago (owners of over half a dozen of LA’s top eateries, including Celestino, Tanino, and Il Pastaio, and the soon-to-be restaurant in the Petersen, as well,) catered all the food. Lucky us! There was a mouth-watering breakfast buffet, which featured the most beautiful assortment of breakfast pastries I’ve ever seen, especially the chocolate chip scones! (Even though I’m not supposed to eat sweets anymore, I just had to have a couple of bites of a chocolate chocolate chip cookie, and I have to tell you that it was the absolute best, number one, most delicious cookie I’ve ever had in my entire life. OMG!)

Luckily for me, and my new way of eating, there was also a fabulous display of whole, un-cut fruit, and I was able to fill-up on grapes, kiwi, and clementines. And, to satisfy us healthful-eating guests, there were cute little cups of yogurt topped with granola and blueberries, and several interesting bottled juices, such as cantaloupe and carrot. 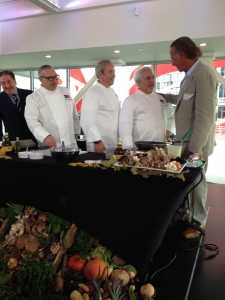 The four Drago Brothers, with a museum exec on the right. Photo by Karen Salkin.

Celia was thrilled with the fresh cappuccino and espresso bar, where they were whipping-up delicious hot drinks all day. Each cup was made to order; they ground-up fresh beans for each person, and the machine added the requested amount of froth. Celia said that was “a much-needed pick-me-up” for the guests who stayed for the whole day, (like we did!)

Even though I can’t wait to tell you about the cars themselves, not to mention the stunning new design of the building, I have to stay on the food just a bit longer. The Drago Brothers did a cooking demo on the conference room stage, (and gave us their secret recipe—oh my!,) and then served their masterpiece to the assemblage. It was crepes filled with mushrooms and fontina cheese fondue, and topped with truffles that the brothers shaved right onto each crepe before the tray was passed. How generous!

They also served lots of other dishes for the next hour or so. The fare was so much heartier than your basic party tidbits; there were unbelievably tasty sliders with caramelized onions, grilled ham-and-cheese triangles, arancini, beet madeleines with goat cheese, and even more. Guests were thrilled with it all. I had so many of the delish pumpkin soup shooters, I thought I would turn orange!

The crepes. Photo by Celia Yusem.

Celia’s favorite treat was the one they made right in front of us. She said the crepes were “paper thin and light,” and she loved the “smooth, lush filling of cheese and mushrooms.” But her favorite touch was that they were “draped with a luscious cream sauce, and topped with shaved truffles,” which was the icing on the cake, so to speak.

One note on the Dragos: I adore Italian guys, in general, and these four all wore bracelets, which I love on men. (I just got Mr. X one for Hanukkah last night, as a matter of fact.) But I’m especially jealous of their familial bond. That’s great to see.

[On a shallow note—a very shallow one—for you single ladies: this is the place to meet men! You should have all been at the opening! But I have a feeling the visitors will be testosterone-heavy on a daily basis, so get yourselves over there asap.] 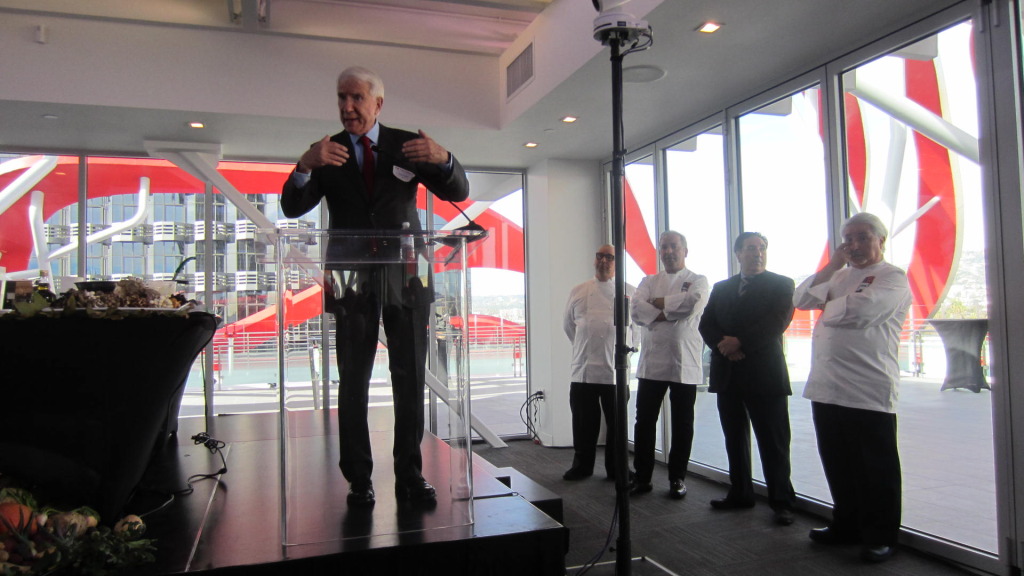 Architect Gene Kohn addressing the crowd, with the Dragos behind him. Photo by Celia Yusem.

Before the dining portion of the day, we got to hear about the impetus behind the already-famous re-design of the building from the architect himself, Gene Kohn. (I’m so shallow, I couldn’t take my eyes off the perfect way his pants fit over his shoes, so I missed some of what he actually said.) I love that he and his co-architect, Trent Tesch, said that they designed it with the movement of LA in mind, which is exactly what we see as we drive up Wilshire Boulevard! In my humble opinion, this modern design is the perfect companion to the across-the-boulevard iconic perfume bottle on the corner of the structure that housed the old May Company all those years ago. Now we finally have something else fun to look at in that area!

Celia, an LA native, (yes, they do exist,) also loves the look of the exterior of the Museum. Here’s her take on it: “The architectural design that wraps around the facade of the main structure is nothing short of breathtaking.  The ribbons of silver and red flow around the structure as if they were undulating roadways for the spectacular cars that are housed inside the museum. Kudos to KPF Associates for their visionary sculptural design of the Petersen Automotive Museum.” 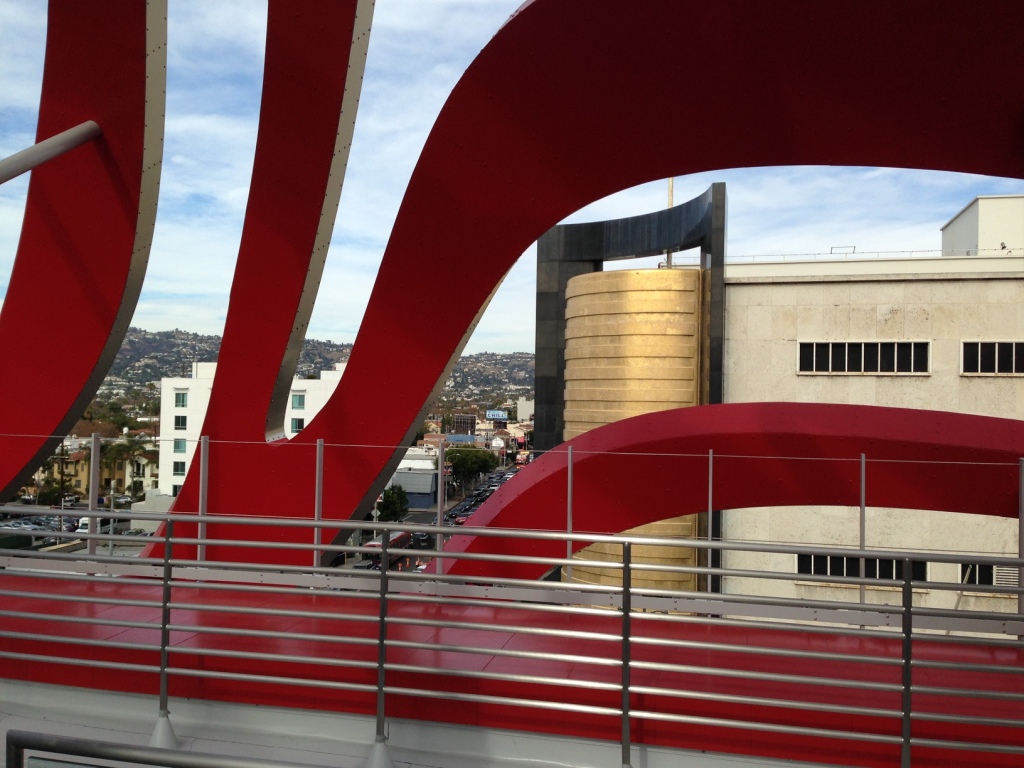 The view of the “perfume bottle” on the building across the street from the Petersen Musesum, viewed though the exterior stripes, which are red on the inside. Whew! Photo by Karen Salkin.

I, too, thought the the strips of silver against the red background look like ribbons, and every time I pass by, I start singing Stevie Wonder’s Ribbons In The Sky, which is one of my all-time faves, so the building gives me a good feeling. I’ve always wanted to dance to that song at my wedding, but you know that, although I love Mr. X madly, I’ve never wanted to get married, except to play that song. So, if ever we just break down and do it, maybe we’ll have the reception at the Museum, which is a fabulous party venue to begin with! (Of course, since I’m a sports nut, the silver “waves” remind me of the streams of ribbon used by rhythmic gymnasts, so they look elegant to me, while at the same time being so hip and modern.)

[Fun Note: Celia and I got to chat with Trent and Gene for quite awhile later on in the day, and I cannot tell you how impressed we both were with this duo! I’ve rarely met such successful peeps who are also so down-to-earth and human. So I have big news for them—they now share the title of My New Best Friend! But enjoy it while it lasts, fellas!] 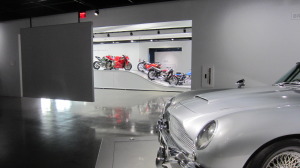 After all of that Penthouse activity, Celia and I finally got to walk around and enjoy the exhibits. I seriously have no idea how we found the strength! We began at the top, and worked our way down. I suggest that you don’t miss any of it; it’s all so fascinating! There were kind and knowledgable docents everywhere we turned. We could have stayed there for literally several more hours to take it all in.

The third floor is dubbed the “History Floor,” and features the Hollywood Gallery. As much as I’ve been fortunate enough to have seen tons of Hollywood memorabilia up-close and personal in this town, I still got a charge out of seeing famous cars, like the Batmobile, right in front of me. 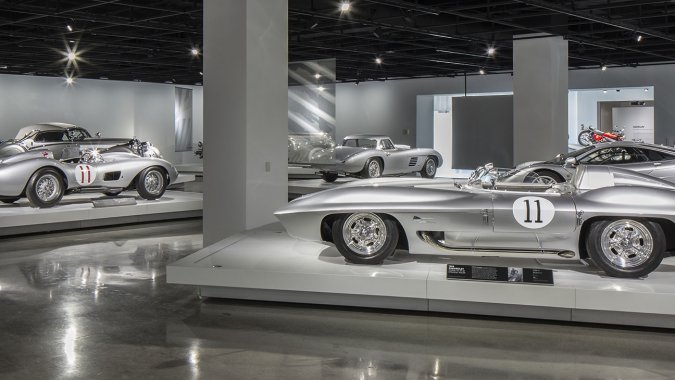 “Precious Metal” exhibit, courtesy of the Petersen Automotive Museum, as is the exterior shot at the top.

The second “Industry Floor” is partly educational. There are see-through classrooms for future car designers from the Art Center College of Design (where I used to model—not for cars, of course, [although I could model for a Volkswagen cover right about now,] but for their fashion department, so I’m partial to that institute.) That floor also features the Pixar Cars Mechanical Institute, which is a Discovery Center, perfect for youngsters.

We saved the best for last—the first floor, with the impressive moniker, “Peter and Merle Mullin Artistry Floor.” That’s where I saw the car that made me cry. How one couple can own so many stunning vehicles is seriously beyond my comprehension. If I had seen just those antique autos, and done nothing else that day, I would have gone home happy.

Speaking of going home, when we did finally exit, each guest left with a goodie bag containing a notebook, (which I wish I had received earlier—then I would have even better notes for you guys!,) a must-have picture book of the museum, and the cute touch of a Hot Wheels car! I think it also should have included some ice and Advil, for our poor tired bodies after all that activity!!!