Trending
You are at:Home»EVENTS»EVENT: STONE MARKERS SCREENING
By Karen Salkin on August 2, 2012 · EVENTS

The screening of this film, Stone Markers, was a really fun event. It was at Universal CityWalk, where I’ve never spent any time, save for two dinners years ago, so that was fun right there. But the best part is…it was in the early morning!!! I felt like we were peeking backstage to see the whole thing, from the venue to the people, so early in the morning when the rest of the location was so still! 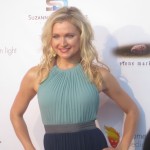 This is how Hollywood everyone looked...at 9AM! Love it. All photos by Celia Yousem.

So, I laud the organizer for all of that. And they still had a red carpet, so it was great to see all the actors in the film all dressed-up like it was nighttime. So different, yet glam Hollywood at the same time. I loved the dichotomy.

Now, to the actual film. I’m going to tell you the truth of what happened with that for me. Screenwriter Clay Sharman spoke before it began to let us know that it was a true story of what happened to him, and his twin bro, back when they were teens. He told us the story of it being written and gave big props to the screenwriter for following the truth and not embellishing. 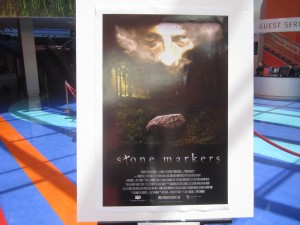 It was billed as a “thriller, adventure” film and I love those. It began and after the initial set-up, they got to the twins and their cute, connected relationship. And I noticed myself smiling. I couldn’t wait for the rest to unfold. And then it became really interesting, exploring the connection between the brothers.

And just then, a rude woman, reeking of the worst perfume ever that made my eyes tear, came and sat down on the step right in front of me. I knew that I should run out of the auditorium then, but I so wanted to continue watching the film. But, alas, it was not to be. Her rotten fragrance gave me an awful asthma attack, so I had to leave the theatre. (If I hadn’t, while I was gasping for air, I would have been as rude as she was!)

Some of the hubbub.

So, after such a fun morning, (which included goodie bags for the guests,) we had to leave while I was still wanting to finish out the film.

What I can tell you, based on what I saw, is that I think it will be good. I’m intrigued to finish the viewing when it comes out, which should be soon. So, I’m thinking you should take a chance it on it, too, and maybe I’ll see you at the movies!