I think many people either know, or can glean from the fact that I always reference only my mother (as opposed to both parents,) that my father is deceased, but I think that not even my close friends can tell you that my father died from lung cancer. It’s just a disease that we don’t hear about on a daily basis, unless we pay attention to the stunning non-smoking commercials. (I wish the smokers they’re aimed at would take heed, but alas, most don’t.) 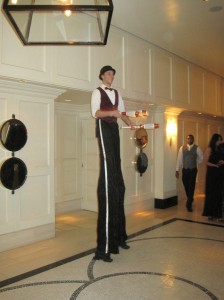 All photos by Karen Salkin, except for the last one at the bottom.

So, when I was invited to The Soho Project’s event to benefit the Bonnie J. Addario Lung Cancer Foundation, I cancelled other plans to be there, without even knowing how special an evening it would be.

It was at the London Hotel in West Hollywood, and was titled Masquerade, (because they were “unmasking” the face of lung cancer.) Lucia and I had just been to a screening of Albert Nobbs earlier, where they also had a masquerade night, so we were doubly into it. (Lucia even brought her own mask, although we chickened-out and left it in the car.) 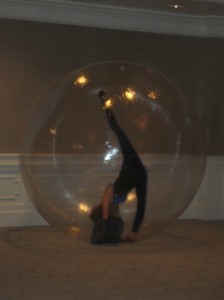 The fun began as we walked into the reception area and saw a juggler on stilts. Fortune Entertainment provided all the talented circus-type performers, including contortionists working their magic in giant bubbles. We were stymied as to how they were breathing, but didn’t want to ask in case they hadn’t thought of that! (By the way—when I was in the circus back in the day, I was billed as a “world famous contortionist!” Trust me, if I could do what these girls can, I might still be in that circus!)

The cocktail portion of the evening took place in the ballroom off the lobby, and featured a silent auction, two bars, a fruit and cheese buffet (with chocolate covered strawberries as a bonus,) and delicious passed hors d’oeuvres, my favorite of which was the mini croque monsieur sandwich. Very Parisian. 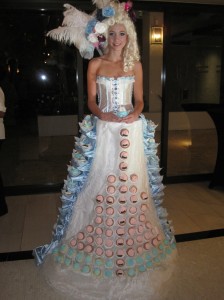 The outer room had a “boothless” photo booth and a girl draped in a cupcake dress, courtesy of Debiteful Cake Pop Shop, from which we each chose the flavor we wanted, (the banana pudding was hard to beat,) and the friendly personnel packed them in individual boxes for us to take with us. They also had a table of beautifully-decorated cake pops wrapped and ready to roll. 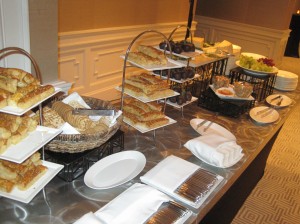 Then we moved up to the tented roof for dinner and entertainment. Believe it or not, my favorite part of the evening was not the Gordon Ramsey-catered repast, but rather the speeches and videos! They were very educational about this insidious disease. Even with the loss of my father to it, I hadn’t realized that lung cancer is the #1 cancer killer of them all! Who knew? I’ll definitely do more research on it now. [Note: the evening’s speakers pointed out that it’s not just smokers who get lung cancer; nor even the unfortunate people who die from second-hand smoke. But I have to put in my two cents on this topic because I can’t feel sorry for smokers who get lung cancer; they have all the information and still choose to smoke, which I think is just insane. And I hate them for foisting their smoke on the rest of us.]

The main honoree was two-time Emmy winner, and more importantly, lung cancer survivor, Kathryn Joosten from Desperate Housewives. I’ve met her a time or two before and she appears to be a lovely woman. I’m always happy for the few dedicated actresses who get famous in their senior years. I was also pleasantly surprised to hear pro footballer, Hank Baskett, speak so well. His wife, ex-playmate Kendra Wilkinson, didn’t talk, but it was the best she ever looked! So much better than on Dancing With The Stars, which is the only other place I’ve ever seen her before.

One final word about The Soho Project because I’m impressed with the sisters who run it, Lindsay and Kimberly Scheel. (Soho stands for Sisters Offering Help to Others. And I don’t think they mean the Ben-led Others from Lost!) Part of their philosophy is that they “believe art is a force for positive change.”  They “create opportunities for artists to use their creative gifts to give back to the community.” What a lovely idea. And they pulled it off wonderfully with this beautiful event.