Trending
You are at:Home»EVENTS»EVENT: MOTHER’S DAY TEA AT THE HOLLYWOOD MUSEUM
By Karen Salkin on May 9, 2022 · EVENTS

With yesterday being Mother’s Day, I was happy to be invited to the Hollywood Museum’s Mother’s Day Tea a few nights before. 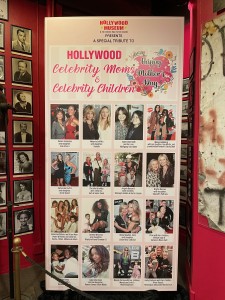 It was the opening of their new exhibition of photos of famous moms with their daughters, or conversely, famous daughters with their moms. It’s a fascinating little display, and I highly recommend you drop by to see it by May 15, when it ends.

As many of you know, I haven’t celebrated Mother’s Day since I lost my own little mo over a decade ago, so the event and photos were a lovely little reminder of the holiday for me.

The pictures begin in the lobby, with the biggest first floor room housing the body of them. More on the exhibit in a minute, but I’m sure you show biz aficionados want to hear about the festivities first.

This opening night party was done differently than the ones I’ve attended at the museum before. They’re usually massive events on the top floor of the edifice, with last year’s Silence of the Lambs tribute being in the “dungeon” area. But this time, the fete took place right in the lobby. There were rows of chairs facing the presentation area, where the speakers appeared later in the evening. And the buffet was set-up right to the side as we entered.  It was really nice. 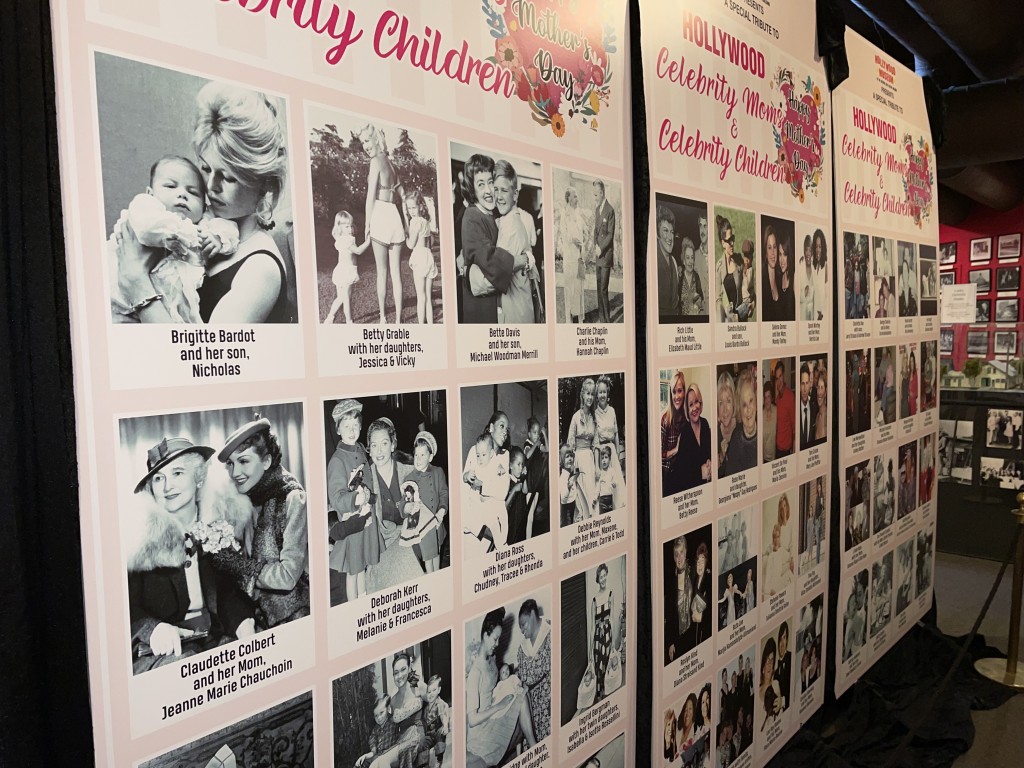 I was thrilled to see that most people were appropriately attired in finery. I guess I had not been to a soiree with all grown-ups in a while! 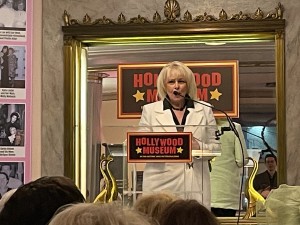 Speaking of those grown-ups, there were several old school actors and actresses on hand. I had never seen any of their series, (except for a couple of snippets of Leave It To Beaver during the pandemic, when it preceded my precious Perry Mason on some cable channel featuring old shows,) but my friend Marc loved seeing them all.

They included The Beaver himself, Jerry Mathers, Michael Learned, who played the mother on The Waltons, and Mr. Belvedere‘s Ilene Graff, whom I had met many years ago because she was kind enough to tell me she was a fan of my show. She and her famous composer husband always seem so sweet. And Ruta Lee was the most nattily attired for the occasion, dressed from head to toe in lime green chiffon. 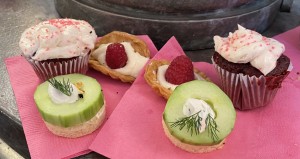 To keep with the theme of a Mother’s Day “Tea,” the buffet featured all finger foods, with a few afternoon tea touches, such as little open-faced cucumber sandwich rounds and lemon curd tarts adorned with raspberries. But Marc pointed-out something really funny—there was no actual tea! Only coffee! That made me laugh.

But the fare was sooo fabulous that no one missed the tea; the resident museum caterers really outdid themselves this time. It began with cheese and crackers, then moved on to shrimp cocktail and a mouthwatering variety of small tidbits including quiche, mini chicken salad sandwiches, pigs in the most luxurious blankets ever, and my fave, which I had never seen anywhere before—tiny crackers topped with…Caesar salad!!! Yum. The last stop was petite red velvet cupcakes, which were the perfect ending to the repast. 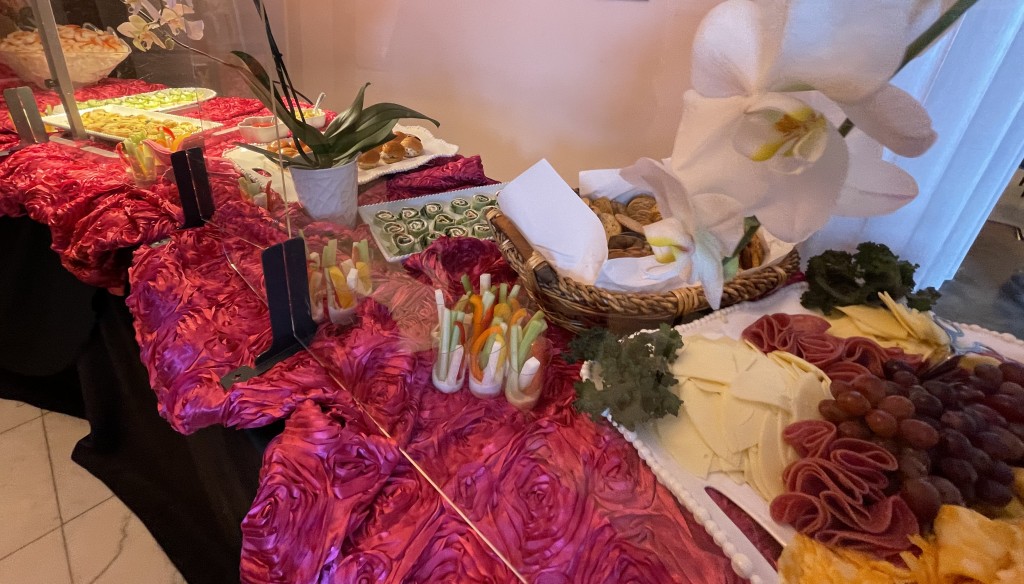 Part of the buffet. Photo by Karen Salkin.

And the evening got even better because the photo exhibit itself is really awesome.  It brought up a lot of fun memories for me; there are pix of sooo many people I have connections with, whether they be confessed fans of my former TV show, with whom I’ve had a mutual admiration, (such as Carl Reiner, Marion Ross, and my good buddy Valerie Harper,) or people whose shows I was fortunate enough to appear on, (such as Kellie Martin and Leeza Gibbons,) or even an icon I played on TV once—Lucille Ball! (Don’t ask.)

Just a few of the scrumptious tidbits. Photo by Karen Salkin.

And I have a poignant connection to one of the participants, Stephanie Powers, which is very apropos for the occasion: her dear mother Julie would call me after some of my shows to say how much she liked my wardrobe or nails or hair that night. I loved that! She’d even call to ask what I thought about one certain celebrity gossip or the other. That all meant a lot to me, no matter whose mother she was.

I loved the celebs’ pix in the museum’s exhibit, but I went them all one better in life—I had my adorable mom on my TV show…three times! And she was a riot. And when I guested on Donahue, they asked for a certain clip of my show, and I said they could have that one as long as they also showed a clip of one of my mother’s appearances. That made her famous! People called her from all around the country! I’m grateful to the museum for sparking that wonderful memory in me, especially at this time of year. 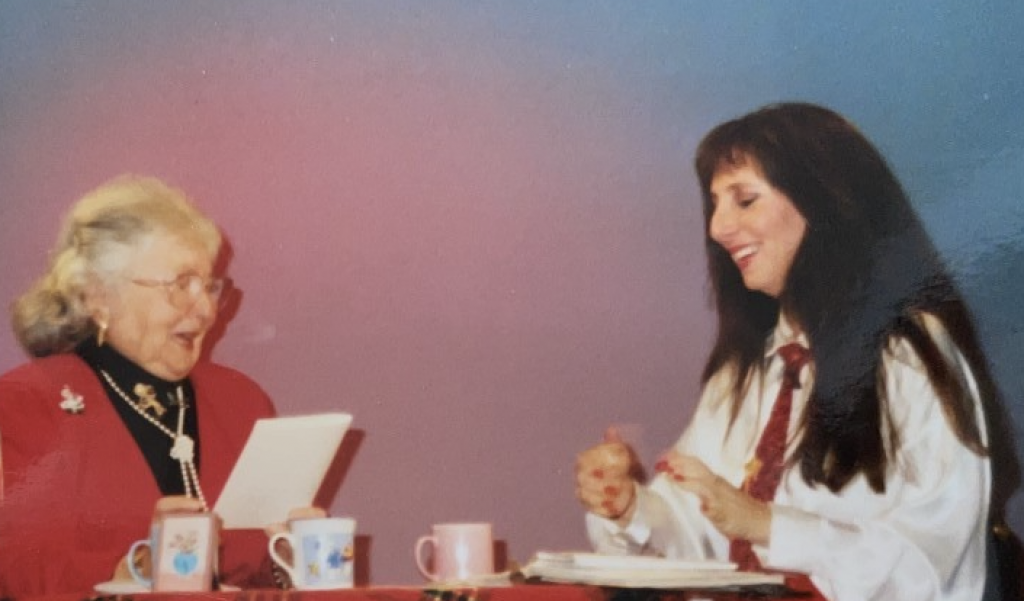 Poet Laureate of Aspen, May Rose Salkin, reading one of her famous ditties on daughter Karen Salkin’s TV show. (Note one of May’s oil painting miniatures on the left side of the table.) Photo by Mr. X.

So I guess you can tell I really appreciated this new exhibition at the Hollywood Museum. If you’re in SoCal this week, make sure you see it, as well, by Sunday. Here’s all the info you need: