Trending
You are at:Home»EVENTS»EVENT: LORIMAR WINERY OPENING
By Karen Salkin on May 22, 2012 · EVENTS

This was a really special all-day event. Since the Lorimar Winery is in Temecula, a couple of hours drive from Los Angeles, several of us VIPs were shuttled there in a luxury van, so that everyone would be able to sample all their wines without having to drive the two hours back to town. The round-trip was interesting enough in itself, but the party once we arrived was the main event. 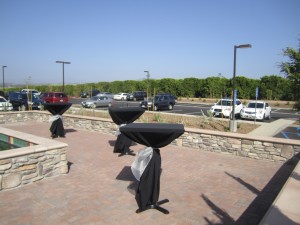 Lorimar has a tasting room in the adorable town of Old Temecula, which we did a drive-by of first, but the opening soiree was at the gorgeous, peaceful, sprawling winery in the country. You couldn’t help but relax there!

We arrived in plenty of time to enjoy the gorgeous, unobstructed sunset, and there were several outside areas from which to view it. My favorite was the orange tree grove, which was easy to stroll through. What was hard was refraining from picking the juicy fruit! 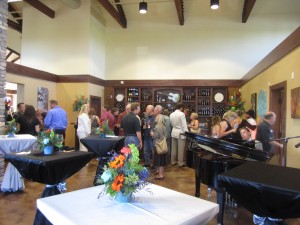 For some reason, I had envisioned this event as a thirty-ish person sit-down dinner. Instead, it was a grand-scale cocktail party, complete with low-key piano player, and had the look of a scene out of one of those opulent Technicolor movies from the fifties and sixties. I loved that feeling. (Well, all of it except for being freezing because we hadn’t realized that a winery had to be temperature-controlled for the sake of the wines!!! Keep that in mind, should you guys ever visit this, or any other, winery.)

The bar in the main room was fully stocked with all of Lorimar many wines. We all know I don’t drink, but I loved their pretty water bottles! Vanessa drank for me, and her two favorites were the pink champagne and the regular variety. The other guests I spoke with seemed split down the middle on the reds and whites. And I was impressed that all the servers were pleasant and helpful.

These winery owners really know how to throw a shindig, food-wise. The on-site chef is Kurt Ehrlich, whose catering I was already a fan of from his stint at the last Roger Neal Oscar Suite. That one was a four-day event and he not only provided both lunch and breakfast for the assemblage there, he came up with different menus every day. We guests wanted to show up multiple times just to see what he was cooking! 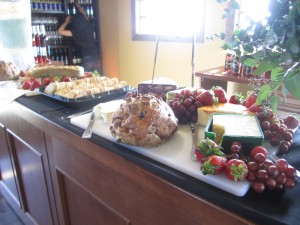 So, I couldn’t wait to see what he was going to do at Lorimar. As we explored the many rooms, including a bridal one, (because they plan on having outdoor weddings there–duh,) the servers passed hors d’oeuvres such as delicious potato puffs and incredibly tasty perfect-sized-for-finger-food shrimp.

And they kept whole pizzas flowing from the pizza oven set-up on the back patio! I could have just eaten a bunch of those and been very content. 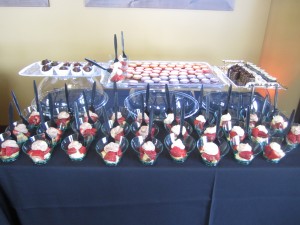 They also had a beautiful, interesting buffet set-up in a side room, with all kinds of cheeses (which, matched with the fresh air, made me feel like Heidi’s getting-healthy pal, Clara,) and fresh pasta with two sauces, red and white (I guess to match the wines!)

Across from that set-up was an array of desserts, featuring pastries, French macaroons, strawberry creations in cups, and my absolute favorite, mini-cannoli! I could have eaten a dozen of them! (And perhaps did, but who’s really counting?) 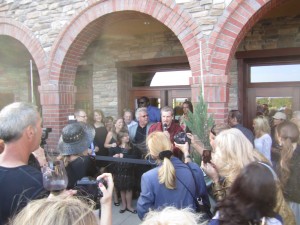 The ribbon-cutting ceremony was on the front patio, and the requisite speeches were short, which is always appreciated at events such as this. And we each left with a bottle of the pink champagne.

My only complaint is that Lorimar isn’t also a bed and breakfast because the whole shebang was so relaxing that I could have gone happily to sleep right after, and wake to the beauty of the region. Perhaps they can add that next year. And I’ll be the first in line to celebrate!