Trending
You are at:Home»EVENTS»EVENT: INDEPENDENT WRITERS OF SOUTHERN CALIFORNIA EVENT
By Karen Salkin on January 29, 2013 · EVENTS

Being a writer myself, (duh,) I’ve known about this organization (IWOSC) for a while now. They’ve invited me to some of their panel discussions and seminars, all of which sound interesting, but, of course, I’m always too busy to attend.

So, I was happy that we had a break from football this past week-end, so I could mosey over to the Veterans Auditorium in Culver City, (whose town newspaper I was recently the restaurant critic of, so I always love going there,) to see what their events are all about.

The whole thing was an excellent experience. There was no muss or fuss; they just got on with it. It was a roomful of intelligent people trying to gain more knowledge. As a matter of fact, when several audience questions were asked that day, the speaker commented, half to herself, “That’s an intelligent question!” I have a feeling she’s never been confronted with so many superior intellects at one time before! 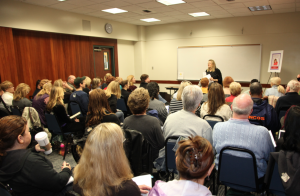 And it was such a human potpourri! I still always picture writers like I did when I was little, even though I’m one myself now. I picture them to look like my mother, herself a poetess; older and teacher-esque, with glasses, (although hers had just plain glass in the frames; she was always ahead of her time.) So, I was pleasantly surprised to see all ages, ethnicities, and level of hipness. I was so curious to ask what each person’s writing specialty was!

This IWOSC seminar was such a popular event; it was basically standing room only. I witnessed about a dozen people being turned-away; I was actually the very last one to make the cut! Whew!

The whole thing was very professionally done; yet it was also a casual, inviting event.

First up was a greeting from their super-amiable president, Flo Selfman. She has a proofreading–copyediting company and is also a publicist, and is one of the few people I know (besides me, of course,) who knows proper grammar, usage, syntax, etc. As a matter of fact, when I know that I’m writing something in the popular vernacular, rather than the correct one, I think, “I hope Flo’s not reading today’s column!”

Then the assemblage heard from a successful woman writer and blogger, Tammy Bleck, who has a blog called called Witty Woman Writing. She basically walked them through blogging 101, which they all seemed to want to know about. The talk was about two and a half hours, with a break at half-time, and the time passed quickly enough.

There’s nothing more you need to know about the actual event because it will be a different lecture each time. (Duh.) And even if you’re not a member, you can pay a small fee and enjoy the one you’re interested in. Their topics always sound so interesting to me. There’s so much to learn in the world of writing! Who knew? One would never think of all these topics by themselves! (Or, at least, I wouldn’t.)

So, in case you’re interested in joining, or just learning more about IWOSC, here are some deets I culled for you, with the assistance of Flo:

– Their members are writers of every ilk: authors of fiction and nonfiction, journalists, screenwriters poets, editors, even publicists; all with different levels of success.

–They stage several programs each month for education and networking, which focus on the business of writing.

–Did someone say parties? They have those, as well, in the form of summer and winter networking events.

So, please check out their site to see how you can benefit from this lovely organization. But one word of caution: if you go to one of their events in this same venue, dress in layers. For the two hours we were there, the temperature went through about thirty changes! And that’s not a work of fiction!