As a driver of a now-classic BMW, I was most interested to attend the very first Classic Auto Show in Los Angeles. It was held in the Convention Center, a place I’ve been to on many an occasion, but this time it looked completely different. There were no booths full of food, baby clothes, or cosmetic innovations—it was just wall-to-wall gorgeous automobiles!!! 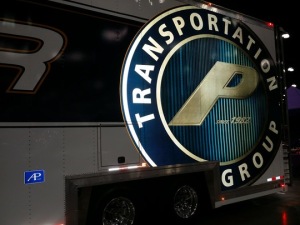 And how did they get them all there, you might ask? Well, my friend, Alice, and I were wondering just that, as well. We rarely get answers in life to the many questions that every event inspires in us, but this time we were lucky. By chance, we met the head of the company that trucks them in! Dean Pliaconis is the President of the Plycon Transportation Group, and he gave us a tour of his humongous vehicle that transports many of the classic cars there. (I’m sure that some of the newer vehicles, such as Mini Coopers and Mustangs, can drive themselves there. But you never know.) 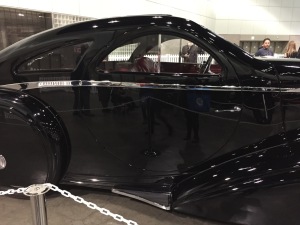 The 1925 Rolls-Royce Phantom. Notice the round doors!!! OMG! Photo by Karen Salkin.

The stars of the show, (I’m sure for all the attendees, and not just us,) were the very, very old cars that were on display throughout. I’m always proud that my BMW 318i (yes, folks, I know it’s shocking, but I do drive a stick!,) is a quarter of a century old, but there were vehicles there from the ‘20s!!! OMG! And many of them are still stunning! The 1925 Rolls-Royce Phantom, with round doors, was not to be missed!!! There were a number of classic cars that I just wanted to sit in for awhile, and even one that I wanted to curl-up and take a a nap in, right at that very moment! 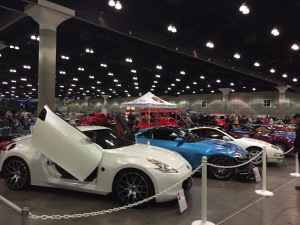 I was also glad to make the acquaintance of Donald Osborne, an author who’s an expert on all these cars. He was uber-pleasant about my picking his brain as to what to do about my beloved Beemer. It’s like a child to me, so, of course, I don’t want to get rid of it. But Mr. X would really love me to drive a newer car. When I explained the situation to Donald, he suggested that I keep the car, and perhaps replace Mr. X! (He doesn’t know the supreme being that is my bae, or he couldn’t even have suggested such a thing. But it did make Alice and me chuckle a bit.)

We had some other good experiences at the Classic Auto Show, as well. When a nice family from Arizona noticed that I was “Press,” they ran right over to me to tell me this fun story: The now-grown son had cancer, and was a Make-A-Wish kid, and loves cars. They approached a guy named Chip Foose, who apparently has a show on a channel named Velocity, and they said he could not have been kinder to them. When Chip gave the guy his autograph, he also drew a picture of the guy’s vehicle on it. I love stories of people in the biz who act right. 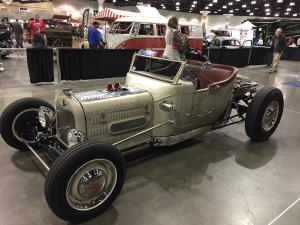 If any of you know what this car is, please educate us in the Comments section below. We can’t figure it out! Photo by Karen Salkin.

These little vignettes just prove that car people are a friendly lot. Much more so than the visitors to the food shows, for example, who will trample each other, just to get a bite of bagel! Or cosmetics fans, who will push a girl out of the way for a polish change. At the Classic Auto Show, we were all in there to see these exquisite vintage vehicles up close and personal, and not for what we can get out of it. It was a pleasure to be a part of that crowd.

And now I can’t wait until next year’s Classic Auto Show. I don’t know how they’ll be able to top this one, but my money’s on them to do just that. (And hopefully, by then, I’ll have either sold my current car, or put it on exhibit in the show! I wonder which situation the second annual show will bring!)