After I wished you all a Happy Earth Day on Friday, I put my money where my mouth is and hopped on over to the lovely Montage Hotel in Beverly Hills to take part in the Debbie Durkin-produced Eco Hollywood Earth Day, a semi-gifting suite who’s main purpose was to showcase leaders of green living, and introduce us to earth-friendly people and products.

The funny thing is that when I told my little mother where I would be spending the day and why, she said, “Oh, don’t you have to wear green then?” I couldn’t believe it! I was so proud of her! I’m usually the first one to be goony and wear whatever is called for on holidays and special days, but this time, I had totally not thought of it. And here was my little mo, who never seems to pay attention to this kind-of thing, (she actually sent me to kindergarten in my Halloween costume…a week early!!! And it was a wedding dress! Now can you understand why I don’t want to get married?,) reminding me to don green attire. Love her!

I guess the rest of the assemblage should have called her, as well, because there were only a handful of us who were cool enough to wear something green. No matter–a lovely time was had by all, no matter what color they were wearing. 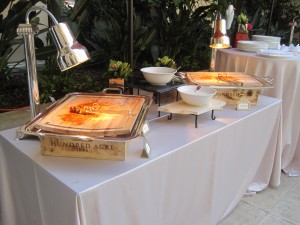 As we moseyed about the beautiful, peaceful Terrace, we were entertained by many soothing musical performances put together by the charity Music Saves Lives, all of which fit right in with the feeling of the day. We snacked on mini-burgers and chicken and vegetable kabobs from the hotel’s Chefs-On-The-Grill, and diet options courtesy of Food At Bod Health. 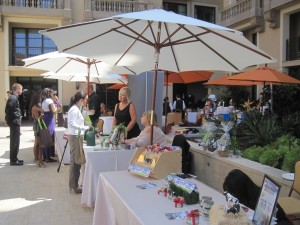 We received a few little tchotchkes from some of the sponsors–a tank top from Odina, Ojavan bath salts, OPI nail polishes (I guess they all had to begin with “O”)–but, shockingly, my absolute favorite, (outside of the Rev7 gum that I chew constantly,) was a giant box of household cleaning products from Shaklee. I’ve used them before and I love everything about them, including their pristine packaging. I was lucky enough to get an extra box to give to my good friend, John Cole, who just moved here from NY to open a gift shop in Farmer’s Market, featuring all “green” items, as well. What better house-warming gift than environmentally-friendly products to keep your new abode spotless?

I stopped by a table to learn about Green Wish, a non-profit that helps local green organizations fund community projects. While I was there chatting with a woman from the group, I noticed Raphael Sbarge, an actor who had been a regular on The Guardian, Simon Baker’s first starring vehicle in the United States, back in the day. It turns-out, he wasn’t a guest–he’s the Founder of Green Wish! Impressive.

I had two Guardian-related questions for him that I was dying to ask, and probably would have, if I hadn’t been standing in the sun–heat makes my mind just shut down for a while. No joke. But here they are, in case he’s reading this:

2) Did Raphael hate that first his character had to develop a crush on, shall we say, a big woman, (which really isn’t that bad,) and then had to turn gay? As an actress who usually likes to know exactly where my character is going, (like when they surprised me on my last film with me being gunned-down in a shootout,) I feel that’s a lot to ask of an actor who didn’t sign up for those developments. I’ve always been curious to hear Raphael’s thoughts on the subject, and here I had my chance and let the heat of the day get in my way. Darn. 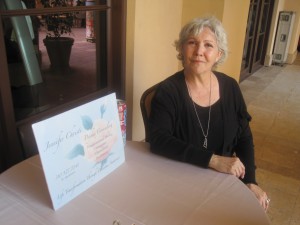 On my way out, I had the most interesting experience of the day. Just as I was about to leave, I noticed a woman sitting at a small table near the exit. (In the shade–I knew she was smart right away.) Never wanting to leave-out a sponsor, or anyone, for that matter, I went right over to see what she was about. Turns-out, she’s Jennifer Christi, who does “psychic counseling,” which I’m sure many of us can benefit from.

She did a “transformational healing” on me, which consisted of her finding the bad spots on my back (which took twice as long as with everyone else because my back is a mess of stress!,) and explaining what they meant that I needed to let go of. She was very often correct, and I was more than happy to do my part by relaxing and doing cleansing breaths, as she did all the work massaging them.

At the end, she told me to just find someplace to sit quietly by myself for several minutes, and admonished that I was “in no condition to drive” right then. I had been on my way out, but, thankfully, deiced to listen to her caution. I’m glad I did because within a few minutes, I began to feel light-headed. I just sat awhile and then gently left. Powerful stuff. It was kind-of like feeling the earth move. Seriously.

And, isn’t that kind-of the purpose of Earth day? To consider the earth in any way possible? All of us at the Eco Hollywood event did our part.