Trending
You are at:Home»EVENTS»EVENT: DIVINE DESIGN GALA
By Karen Salkin on December 12, 2011 · EVENTS

This was one event that could be truly called an “event!” There were several parts to the evening, and the entire shebang was looser than the rest of the big charity dinners I’ve been to, which was a pleasure. 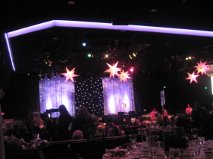 I’m absolutely at a loss to explain how I never heard of this event before, when it’s been around for twenty years! But it’s not how you start, it’s how you finish, so all that counts now is that I got there this year. And that I hope to be there for many years to come.

Divine Design benefits Project Angel Food, and the fact that there were about a zillion volunteers speaks to how well thought of this organization is. It’s one I’ve been touting for years.

Now, on to the exhausting, in a good way, evening. 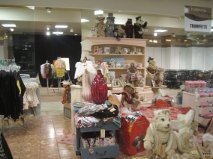 Guests began to arrive at the Beverly Hilton Hotel as early as 5PM to get to be one of the first to shop at the Marketplace across the way, a good use of the venerable old Robinson’s building. (The shopping went on for a few days; this was just the opening night Gala I’m describing.) Shoppers got wonderful deals,(it was 50% off the night of the Gala,)and Project Angel Food got to feed incredible numbers of people in need. It was a win-win-win situation because the gifts’ recipients are victors, as well. 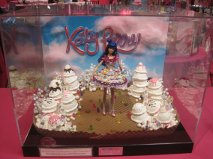 Holiday music played and drinks flowed to help guide us through the various designer’s areas. There was truly something for everyone, though I could barely drag myself away from the magical Barbie area. (I guess that bitch is back!)

It was cool and loose as to how long we could shop that evening. Cocktails went from 6-7:30 back at the hotel, during the arrivals, so you could use some of that time to finish up your purchases.

Our first desserts, right after dinner. Love that centerpiece!!!

On a personal note, I happened to be standing right where honoree Viola Davis entered, and had been asked to say hi to her for our mutual great friend, and college theatre professor, Dr. William Hutchinson, from our alma mater Rhode Island College. But I never like to interfere with entrances or exits, so I put it off for later, which, of course, never came. So much to do at this event, and even with how many hours the duration, so little time.

We then moved into the beautifully lit ballroom for the delicious dinner. I must commend the service staff for getting this humongous crowd fed in a record time so that there would be no noise during the program, a concept I welcomed along with the performers. Among other speeches and such, Viola got lauded and Kristen Chenoweth serenaded the appreciative assemblage. (That girl is showing up everywhere nowadays! Good for her!) 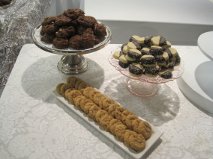 As if all that wasn’t enough, post-reception, we were invited back to the Marketplace for a dessert buffet!!! The red velvet cheesecake squares were my faves. Lucia and I didn’t have much time for the sweets, though, as we had more shopping to accomplish.

The organizers were smart to bookend the dinner with shopping opportunities because the second-guessers, such as I, had time to mull over what items we had left behind the first go-round, and actually go back and get them before we left the premises!

Great food, classy shopping, and excellent entertainment, along with caring company (since we were all there for the common purpose of contributing to a great cause, Project Angel Food,) made for one of the most worthwhile evenings of the year!