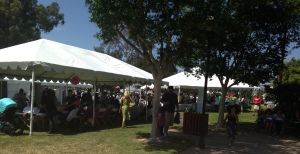 What a fun event Alice and I went to this past week-end!  The Spring Family Fest, presented by Club MomMe, was held on the beautiful grounds of the Muckenthaler Cultural Center in Fullerton, and it had a little bit of everything.  It was all outdoors, and the weather was perfect for it!  I’m sure all the families appreciated that. The kids all looked to be thrilled with the surroundings! 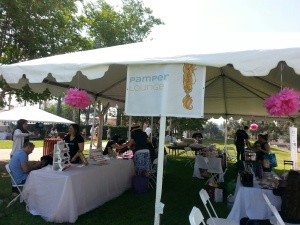 We press peeps (who the invite kindly stated had “been identified as key influencers in the ‘MomMe’ space,” a designation I love, even though I’m a bit more “me” than “mom!,”) began the Fest with an early morning continental breakfast, of which Alice said, “What a nice way to start the day–with yogurt, granola, and fresh fruit!”

The event opened to the public after that, and the real fun began.  There were seminars, (including an important one on vaccines; I wasn’t there, but, especially as a former teacher myself, I hope they said to get them!!!,) product sampling, snacks, live musical performances, and even a diaper station, complete with complimentary diapers and lotions! 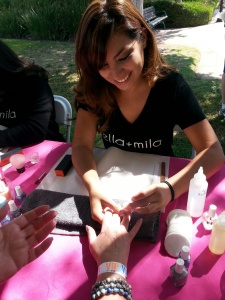 But, of course, the “Pamper Lounge” was our favorite part of the day.  (Yes, even more than the food!)  First up, I had a fabulous, glittery manicure by Audrey Mora using Ella + Mila polishes.  This new-ish company has some really mouth-watering colors, and it was a bit hard to choose among them. But, by committee, we came-up with two cool lavenders, topped with tons of glittery sparkles.

Then we both got massages from Lauren Cicerone of Zeel Massage, which does house calls in Los Angeles and Las Vegas.  Lauren, being a circus performer in her other life, knew just how to work with my broken back, and Alice said she was “the best,” and “hit all the right points in my back and neck.” 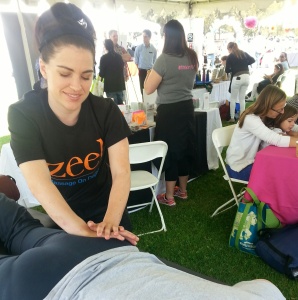 Lauren Cicerone working the kinks out of a knotted guest. Photo by Alice Farinas.

We finished off our time in there with relaxation acupuncture (five needles on the tops of our heads,) courtesy of Dr. Jason Moskovitz, who’s headquartered in Newport Beach. Alice mentioned that she “really didn’t feel a thing,” and added that Jason “was so kind,” two points with which I concur. She forgot that he’s cute, too!

All refreshed, we finally got to walk around the grounds, and see what was happening, including sampling—guess what?–the samples! A couple of highlights of those were children’s books and DVDs from Snooknuk, a family play place near Paramount Studio that specializes in activities for both children and their grown-ups, and a Thirteen Apples’ “design-your-own” candy apples station, which is a great way to combine something sweet with a healthful item. My hot-fudge-and-rainbow-sprinkles one was yummy! 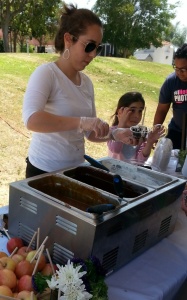 Before we left, we went back to the VIP lounge to enjoy a lunch of fresh beef, pork, and chicken tacos made right there on the grill. Everyone enjoyed that part.

We all left with big goodie bags chock full of excellent items, (including toys, nail polish, face wash, books, and ever-important sunscreen,) for babies, children, moms and dads, and even non-parents. The whole day was ultra-educational and fun, and everyone appeared to be having a good time, (except for one kid who wouldn’t stop screaming, but that’s par for the course at a family event, don’t you think?!) If there’s a Summer Family Fest, you know I’ll be at that one, too. And so should you!