Trending
You are at:Home»Uncategorized»EVENT: BEAUTIFUL BUNDLEZ LAUNCH
By Karen Salkin on October 18, 2016 · Uncategorized 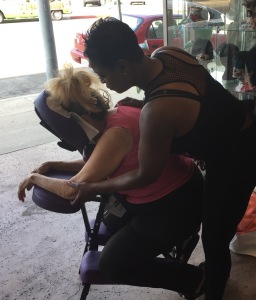 Crystal giving a magic massage to a guest. Photo by Karen Salkin.

My friend, Flo, and I spent a lovely afternoon at this event in Salon Ramsey in North Hollywood. Everything about it worked. All the guests were upbeat and mingling, the music was fun, the services were excellent, and the food was delish!

Even though it was held in a hair salon, they weren’t doing hair that day. Go figure. But we both got chair massages by massage therapist Crystal. This was perhaps the best massage I’ve ever received! She really got in there and worked on my evil knots, as opposed to some of the others masseuses at events who just kind-of phone it in. (And she’s an entertainer, as well. I bet she’s as good at show biz as she is massaging.) 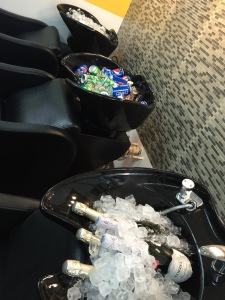 While Flo enjoyed a glass of bubbly (or two—but who’s counting,) she spent a lot of time discussing an anti-bullying campaign with some of the other guests. She was very impressed with all of it. (In case you’re interested, as well, which we hope you are, it’s called CALLM, and began because the founder’s autistic son was constantly getting bullied at school. I believe you can find them on Facebook.)

There was a bar set-up right in front, and there was a very cute touch at the back of the place. They put all different beverages in…the shampoo sinks!!! One held bottles of water, another one had cans of different sodas, and the third kept the many bottles of champagne on ice. Absolutely adorbs.

But the piece de resistance was the buffet! It was catered by the near-by Sweetie Pie’s, which is always a crowd favorite. There was incredible fried chicken, fall-off-the-bone ribs, beans, rice, fish sandwiches, and salad. But several of us, (me included, of course,) actually began with the mouth-watering desserts! There were mini strawberry shortcakes (in cups!) and my fave—banana pudding! I would have been happy eating just a couple (okay—several) of those.

Flo and I were both on heavy duty deadlines that day, so we had planned to stay for only a few minutes. But, before we knew it, a couple of hours had gone by! We left there full, relaxed, and smiling. What more could you ask for in a pleasant Monday afternoon event?!