As someone who spends at least three months a year in New York City, I’ve always appreciated Restaurant Week. Although it began in 1992, I never heard of it until the winter after 9/11. (Which happened in 2001, for those of you lucky enough to forget the details of the tragedy.) I, erroneously, thought it had been invented to try to get shell-shocked New Yorkers out of their houses and spending money again, while getting back into life. It actually did help many whom I knew.

As a restaurant critic, whose dream is to eat at every restaurant in New York and L.A, if not the world, this seemed like a great time to try as many different ones as possible without breaking the bank or getting my friends into debt over the more expensive eateries. (For those unfamiliar with the concept, I’ll tell you how it works in a second.)

But, since I live here in LA for the other nine months, I always wished that someone would bring the concept to this city. I had actually thought of doing it myself, but I already had too much on my plate. (Figuratively and literally!) 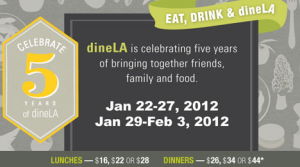 Then five years ago, dineLA was born! Yay! I always hate L.A. being behind NY, (in anything other than sports teams; I love the NY ones, if you get my drift,) but, better late than never. And, in an effort to make it “our own,” the lunches and dinners come in three different price ranges, which seems only fair, since so do the actual restaurants! (The list features everything from cafes and diners to steakhouses and proposal-inspiring hotel dining rooms.)

The two-week event began yesterday and goes through February 3, so let’s get started already!

I’ve tried dining at a bunch of the participants over the years, with varying results. Some are hits, some misses. But wouldn’t you rather miss for $16 than for $30??? I know I would. And the $16. lunches are truly hard to beat.

So, as promised, this is how it works: about two hundred Los Angeles-area restaurants offer set menus for the two weeks of DineLA. (They all skip Saturdays, and some places choose to continue the special menus after the main promotion is done, so be aware of that.) The smartest thing to do is to go to the site (below,) and look at the menus of places you’re interested in. I basically check them all out, because I’m a picky eater, as most of you know. And, in a way, Mr. X is even pickier! (He prefers to eat salmon almost daily.) There are some places I’m dying to try, but their dineLA menus are not to my liking, even though I can find something on their regular ones, so I pass on those choices for now.

Most dineLA menus have three choices in each of three courses, so there’s usually something for everyone. For the people who want to get the best deal, and have the time, you can always look-up their regular menus and see how much those three courses would cost on the other fifty-two weeks of the year. Sometimes the savings are incredible, other times they’re not much; you just have to do the research if that’s important to you.

But overall, dineLA is a great way to try many restaurants. If you’re cautious, you can always begin with the least expensive ones, and occasionally move up a dollar sign.

I’m happy to have tried even the not-so-good ones, just to have that knowledge. Three of the stand-outs I’ve found over the past five years are Luna Park, Simon LA, and 2117, a place I really had no high expectations for. But, I recommend skipping Wolfgang Puck’s Red Seven in the Pacific Design Center and La Sandia in Santa Monica Place; those two are beyond duds. [Note: you can read my review of the latter here: www.itsnotaboutme.tv/news/2011/10/28/dining-la-sandia, and the former here: www.beverlyhillspeople.com/pages/Out_To_Lunch_050808.html]

The whole two weeks are so much fun for dining adventurers, like I! I attended the kick-off recently, at the W Hotel in Westwood, and it was interesting to see so many chefs there, relaxed and mingling. A bit too relaxed, perhaps, because we couldn’t hear the speeches! But, I believe they did make us aware of a promotion with American Express, which gives you a rebate if you try three restaurants, (or something like that,) so check-out that info on the site, as well.